You Are Here: Home » Working Principle Behind the Abbe Refractometer 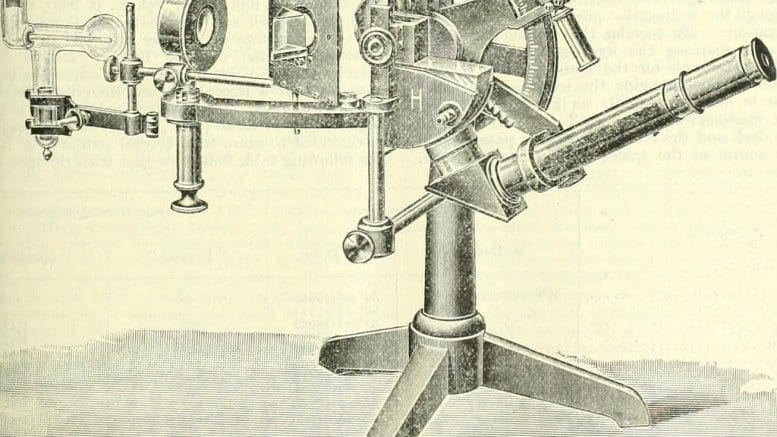 A refractometer is an instrument which measures refractive index by making use of total internal reflection. Pulfrich designed a refractometer enabling the refractive index of a liquid to be easily obtained, which consists of a block of glass G with a polished and vertical face. On top of G is cemented a circular glass tube V. The liquid L is placed in V, and a convergent beam of monochromatic light is directed so that the liquid-glass interface is illuminated. On observing the light refracted through G by a telescope T, a dark and light field of view are seen. Abbe designed a refractometer for measuring the refractive index of liquids whose principle is illustrated as follows:

Two similar prisms X, Y are placed on a table A, the prism X being hinged at H so that it could be swung away from Y, A drop of the liquid is placed on the surface a, which is matt, and the prisms are placed together so that the liquid is squeezed into a thin film between them. Light from suitable source is directed towards the prisms by means of a mirror m, where it strikes the surface a, and is scattered by the matt surface into the liquid film. The emergent rays are collected in a telescope T directed towards the prisms, and the field of view is divided into a dark and bright portion. The table A is then turned until the dividing line between the dark and bright fields is on the crosswires of the telescope, which is fixed. The reading on a scale S, which is attached to, and moves with, the table, gives the refractive index of the liquid directly.

Working Principle Behind the Abbe Refractometer