You Are Here: Home » Why Do Spotted Hyenas Laugh? 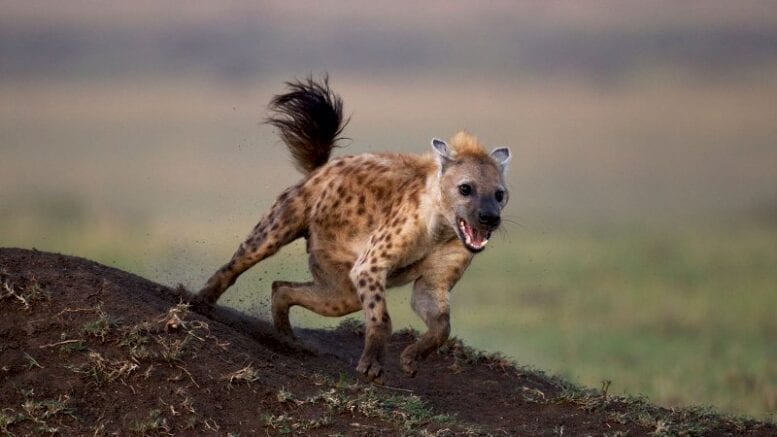 The spotted hyenas known as  (Crocuta crocuta) that stalks the savanna of eastern Africa isn’t one to waste a scrap of food. After a successful kill, hyena packs leave behind little trace of their meal. One of four hyena species, the spotted breed has the strongest jaws in proportion to body size across the entire mammal kingdom. In less than half an hour, a group of them can kill a 400-pound (181-kilogram) zebra and gobble it up, bones, fur and all.

Perhaps because of their fierce jaws, cunning hunting tactics or nocturnal nature, spotted hyenas have nefarious reputations. Certain tribes in eastern Africa believed hyenas are owned and ridden by witches. Any American child with a penchant for Disney movies cringed in fear when the menacing pack circled beloved Simba on the animated African plain. Like a wolf’s howl in the western United States, a hyena’s laugh piercing the air could send a shiver up the hardiest safari guide’s spine.

Though their dental might is a terrifying prospect, spotted hyenas aren’t mindless scavengers. Research has revealed that the carnivores live in surprisingly complex clans of 60 to 90 individuals. Moreover, the frontal cortex of their brains, thought to regulate social intelligence, is the largest of the other three species: brown, striped and aardwolf.

A dominant female rules the roost, and a strict hierarchy descends from there with males cringing at the bottom. Female alpha hyenas can pass along their dominance in the womb. A surge of testosterone and other hormones in utero causes an alpha’s cubs to be more aggressive than those of subordinates. Even before cubs are born, things become cutthroat. Due to the narrow shape of the female hyena’s uterus, 60 percent of cubs die during birth [source: Kemper]. From there, litters of more than two cubs will result in a fight for milk since most females have only two nipples.

Brawling over food doesn’t end once cubs can stand on their own four feet. Battling for a meal can lead to high hyena mortality rates and elicit the spotted species’ telltale cackle that can be heard up to 8 miles (12.8 kilometers) away.

If you happen to get close to a pack of hyenas dining on a freshly killed carcass, you’ll probably hear peals of laughter. But those aren’t signs of happiness. Most of the time, a spotted hyena’s laugh is in response to agitation or attack. When a feeding frenzy ensues, hyenas may claw and nip at each other in an effort to get a mouthful of meat. That aggressive behavior incites the laughter-like outbursts that we associate with the spotted hyena. Laughter is only just one of the spotted hyena’s vocalizations. Each has a unique “whoop” that serves as its calling card. Also, researchers determined recently that mother hyenas talk to their cubs with melodic groans.

Such laughter-inducing dietary competition contradicts the notion of the hyena as a scavenger. If they don’t hunt their own food, why would they display such aggression during feeding time? Contrary to popular belief, spotted hyenas scavenge less than a third of their total diet. In fact, they’re the most abundant large predator on the African continent, beating out lions, leopards and cheetahs. And it should be noted, all those other animals are scavengers too.

Hunting can be dangerous business for spotted hyenas, especially considering that their chief rival is the lion. Hyenas that hunt in groups have a 20 percent greater chance of catching prey, but also have higher likelihood of attracting unwanted attention. For that reason, the most successful hyenas will hunt alone and then return to the clan to benefit from the protection that the social grouping offers.

Once hyenas capture prey, males are usually the last to eat and the most bullied around the carcass. When males reach sexual maturity at around 2 years old, they escape their clans in search of a new one. But after they find a potential foster clan, they must work hard to impress the females in order to mate. It can take up to two years for females to allow a male into the clan. During breeding season, giggles may echo from hyena territory. In that case, however, it isn’t a sign of aggression. Just like humans may laugh on a roller coaster ride to express fear and excitement, so the eager spotted hyena lets out a mating-time chuckle.

Be the first to comment on "Why Do Spotted Hyenas Laugh?"