What is Psoriasis? Psoriasis is a noncontagious chronic inflammatory skin disorder that causes the skin to itch and form patches and scales. These patches are called plaques. Reports show that Psoriasis affects people of all races, gender and age. Approximately 3% of the U.S.A. adult population (7.5 million adults) and 125 million people worldwide has psoriasis. Studies by the World Health Organisation (WHO) shows that males and females have an equal probability of being affected. Many questions have been posed on what is psoriasis and its treatment?. We shall examine this disease more as we journey on!

The report shows that about 75 percent of cases are diagnosed before the age of 46. While 25 percent of diagnoses occur in adults in the late 50s and early 60s.

In most affected people, the disorder is visible on only a few patches on the skin but the rash can emerge anywhere on the body.

Psoriasis tends to affect the skin of palms and feet, fingernails and toenails, elbows and knees, face, lower back and genitals and scalp.

READ MORE:  The Role of the Genetic Code in Cell Development

The types of psoriasis include;

80% to 90% of people suffering from psoriasis have Plaque Psoriasis, which makes it the most common form of Psoriasis.

Also called Psoriasis Vulgaris, it appears as reddish patches with white scales on the skin and tends to affect sites of friction and abrasion like the skin of the elbows, scalp, shins and knees.

Inverse Psoriasis, also called flexural psoriasis appear as inflamed skin with pink patches and no scales.
Its patches develop in genital areas like the head of the penis, groin, buttocks, under armpits or breasts.
It frequently affects areas where the skin folds.

Erythrodermic Psoriasis, also called Psoriatic erythroderma is a very rare and severe type of psoriasis that appears like sunburns.
It often involves 90% of the entire skin and it is also fatal and life-threatening so, it is advisable to seek medication attention immediately.

Pustular Psoriasis which most often affect the feet and hands and is later widespread throughout the entire body is more common in adults.
It appears as bumps and blisters that are filled with pus.

Guttate psoriasis causes small pink bumps on large areas of the skin like the arms, legs and torso.
These small spots which affect children and young adults after a sore throat are similar to that of the plague psoriasis.

Other common types of Psoriasis include: 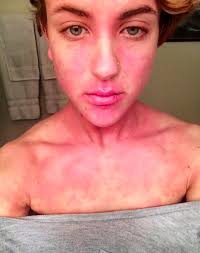 Signs and symptoms of Psoriasis vary in different individuals depending on the type of psoriasis.

Nevertheless, certain symptoms are common among affected persons.
They include:

6. Soreness and Burning Sensation around patches.

7. Red and Inflamed patches of skin.
The white plagues which often appear on these red patches are also a symptom of Psoriasis.

Causes And Risk Factors Of Psoriasis

It is still unclear what causes psoriasis, but research has discovered some factors that might foster its emergence. 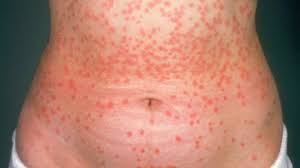 Lifestyle Changes that can help relieve psoriasis symptoms include:

6. Use Moisturizers after Bathing

There is no confirmed treatment for psoriasis.
These treatments are administered to remove scales and plaques.

The Medications used to treat Psoriasis include:

Topical treatments include ointments that can be applied directly to the skin.

Light Therapy, PUVA and Immune Therapy are other treatment options that are followed to help slow down cell production and relieve symptoms of Psoriasis.