Storm surge: This illustration shows how hurricane winds can push a pile of water across the ocean surface in the direction that the hurricane is travelling. The extremely low pressure under the eye of the storm allows the surface of the water to rise a few feet. Image by NASA. 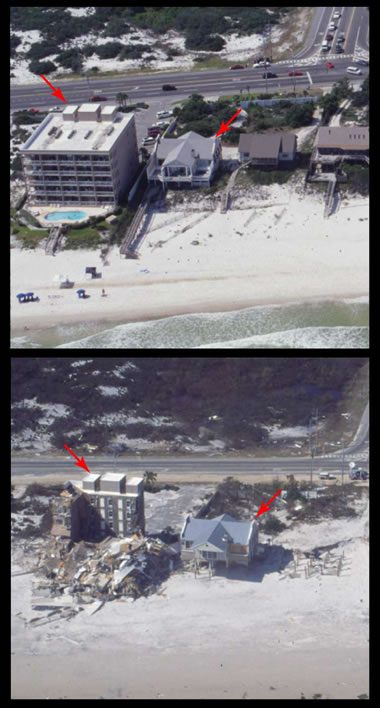 Hurricane Ivan (September 17, 2004): This image pair shows before and after views (arrows for reference points) of an area of Orange Beach, Alabama. A powerful storm surge washed away the two small buildings on the right side of the top photo. The large building on the left was built on a sand dune that was severely undermined, causing a collapse. This illustrates that even the upper floors of multi-story beachfront buildings might not be safe. Evacuate promptly if an order is given.

What is a Storm Surge?

A storm surge is a mound of water produced when a hurricane moves across a large body of water.
Driving wind “pushes” the water so quickly that it “piles up” on the water in front of it, producing
a mound of water that is higher than normal sea level.

As the storm approaches land, the storm surge can be pushed up the beach and deep into inland areas. It
arrives as a rush of water and can be capped by large, strong, pounding waves. Storm surge flooding
is often the most deadly and damaging impact of a hurricane.

How Dangerous are Storm Surges?

Storm surges are capable of causing total inundation of entire coastal areas. A powerful hurricane can produce
a storm surge of 15 feet or more. Storm surges of 20, 30 and 40 feet have been experienced in extreme storms.

READ MORE:  What's the Difference Between Raw and JPEG Files?

Portions of many important coastal cities and resort areas have thousands of people living on land that is less than 10 feet above sea level. Storm surges can knock down buildings, move trains off of their tracks, carry ships and docks inland, fill subways and do many other types of damage.

People who live in vulnerable areas should heed evacuation orders. If they wait for the water to arrive, escape
can be impossible. This is because the surge arrives suddenly, and quickly covers a very broad area. Less than
two feet of water can drown out a car. Walking through moving water is very difficult. The water can be very cold, and the wind chill will cut right through wet clothing! People who cannot escape quickly to higher ground or second stories can easily die of hypothermia in under an hour. 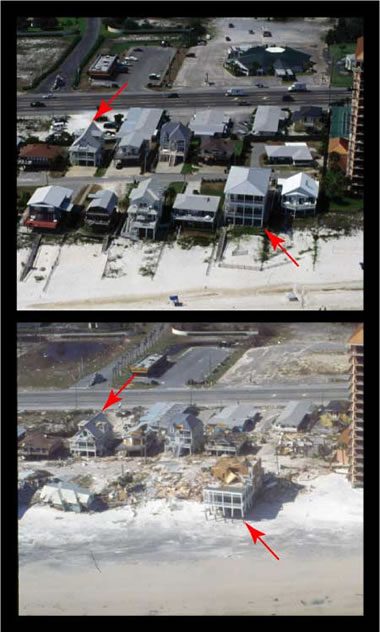 Hurricane Ivan (September 17, 2004): This image pair shows before and after views (arrows for reference points) of an area of Orange Beach, Alabama. Several houses were either damaged beyond repair or washed off their foundations and destroyed. If you live in vulnerable areas, respond promptly if an evacuation order is given.

The two sets of before-and-after photos on this page are from a storm surge produced by Hurricane Ivan’s
strike on Orange Beach, Alabama in 2004. Note the red arrows marking equivalent positions in the before and after
images and the extensive damage that occurred.

READ MORE:  What Is Energy?

What chance do you think a person who disobeyed evacuation orders and went to
the second floor of the homes or to the upper stories of the larger buildings would have of surviving?
How about someone who decided to walk out and was in the open when the rush of water arrived? That person probably tried to drive out, but downed trees and wires blocked their path or water choked their engine. Evacuate when you are ordered, to stay safe.

Storm surge is one of the deadliest aspects of an approaching hurricane. NOAA has more information about hurricanes and hurricane safety at Hurricanes.gov.

Forecasting a storm surge and its characteristics is difficult because there are so many variables. It is difficult
to predict the time of arrival, and that makes it impossible to know if high tide or low tide will be contributing to
the height of the surge or detracting from it. It is also difficult to know the windspeed at the time of landfall,
how much water will be contributed by rainfall, the exact location of landfall and how topography will influence the
movement of water. If you live in an area where an evacuation is ordered, obey that order and leave promptly.

The National Weather Service has extensive information and research products available for anyone who wants to learn more about storm surge. You can find it on the Storm Surge Unit website or in the video on this page.

The United States Geological Survey has a Coastal Change Hazards website that has lots of information about the impact of storm surge and coastal erosion.