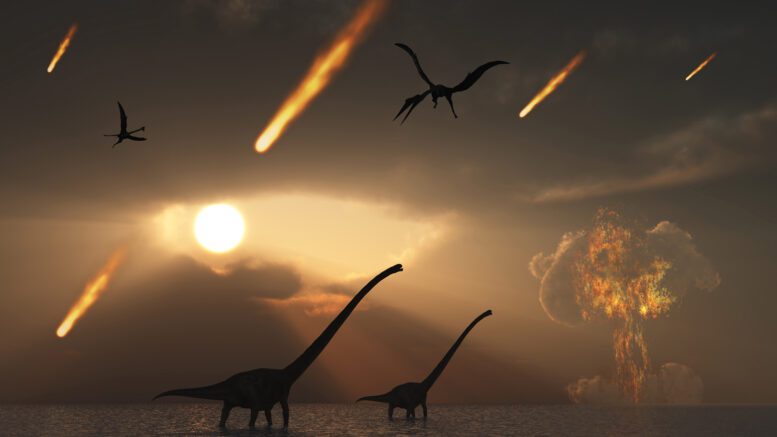 The last days of dinosaurs during the Cretaceous Period, caused by a giant asteroid impact at Chicxulub off the coast of Mexico.

Asteroids are mighty, rocky bodies that move around the Sun. These bodies which range from one to hundreds of meters in diameter become known as meteorites when a fragment of it survives landing on earth. Sixty-six, million years ago, a mighty impact from an asteroid roughly 6miles ended the reign of dinosaurs which lasted for 180 years. This impact caused a crater and a huge explosion roughly 110 miles across.

After the asteroid hit the earth at high velocity, a huge heat and blast wave went out and it released various amounts of materials into the atmosphere. The presence of these objects in the atmosphere leads to the reduction of the amount of light that reached the surface of the earth. And it drastically affected plant growth.

All living things, both on land and sea were affected by the crash because the reduction of plant growth means herbivores’ ability to survive was affected and it also meant the carnivores had less food available.
Reproduction cycles in animals become shorter and weather conditions became harsher.

The seeds and pollen of plants can survive harsh periods and that made them less affected by the crash.

Meanwhile, the impact of an asteroid on earth caused the death of over 75% of animals at that time.
Apart from Crocodiles and sea turtles, all four-legged creatures weighing over 25kg were wiped out.
Large marine reptiles and ammonites were also wiped out by the blast.

The list of casualties is endless but it made way for the emergence of the civilized world. The site of the impact which is called Chicxulub Crater was centered around the eastern part of the Gulf of Mexico now called the Yucatán Peninsula.
The Impact is regarded as the second-largest crater in the world.

Meanwhile, The wiping out of dinosaurs and other creatures has been attributed to both climate change and asteroid impacts.

According to reports, there were a lot of volcanic activities at that time in a place which is now Central India, which led to the release of dangerous gases in to the atmosphere and even climate change.

The asteroid was just icing on the cake of the damage that volcanic activities had already caused to planet earth at that time.

There are still uncertainties about how long this dinosaur-crushing period lasted.

It was 15 million years after the extinction of dinosaurs that large mammals like rhinos appeared.

How Was This Asteroid Impact Discovered? 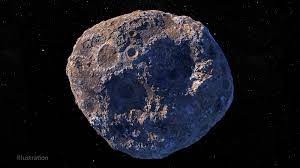 A theory was released in 1980 by renowned physicist, Luis Walter Alvarez and his son Walter Alvarez, who is also a geologist, that the appearance of an ancient soil which contains iridium – an element that is commonly found in meteorites, was the result of the collision between asteroid and Earth.

The theory further stated that the widespread effects of this impact on the vicinity were the reason behind the dinosaurs sudden demise.

This hypothetical theory which was earlier opposed and debated on is now an accepted theory for the collective extinction at the end of the Mesozoic era.

One of the researchers named Paul who agreed on the Alvarez theory said “An asteroid impact is supported by really valid evidence because we have identified the crater.
It is presently buried on the seafloor off the coast of Mexico.
It is in the exact age as the mass elimination of the dinosaurs, which can be tracked in records all over the world.
The date is accurate for these clay layers around the world and it is estimated to be within a couple of thousands of years, and the date of the extinction of dinosaurs is also 66 million years ago.

The asteroid hit at high velocity and vaporized. There was total devastation in the immediate area which formed a huge crater.
A huge blast and heatwave went out and it threw different materials into the atmosphere. It sent soot into various parts of the world”.

Dinosaurs retain the title of the largest land animals that ever lived on planet earth.
Whales are the only animals that have exceeded their size.

Meanwhile, since the extinction of dinosaurs, asteroids are now well known and studied.
They move through the inner solar system and cross the Earth’s orbit.

According to studies of orbit statistics, Asteroids of 10km size could hit earth in the future, but its impact isn’t expected to be the same as the one that happened 66 million years ago.