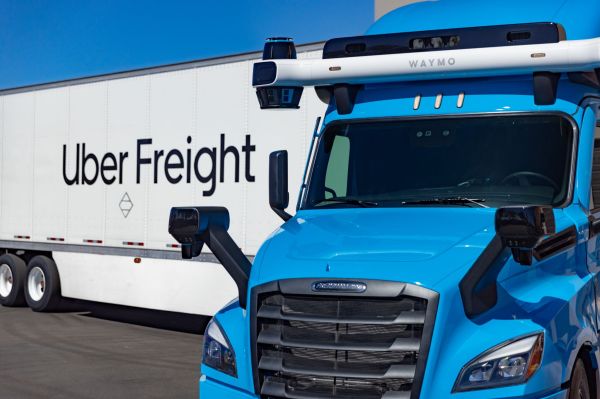 Waymo Via, the delivery division of Alphabet’s self-driving unit, is embarking on a long-term, strategic partnership with Uber Freight, Uber’s logistics spinout. As part of the agreement, Waymo is committing to reserve billions of miles of its “goods-only,” driverless capacity for the Uber Freight network.

Over the past year, Waymo Via has lined up other long-term alliances with major logistics companies like C.H. Robinson and J.B. Hunt. As Waymo aims for commercialization, this partnership gives the company an avenue to reach Uber Freight’s more than 130,000 carriers.

The multi-year partnership will unfold in phases. Phase one, which Waymo says should happen within the year, involves Waymo Via putting onto Uber Freight’s network its test suite of Peterbilt trucks that have been retrofitted with the Waymo Driver. In this pilot scenario, Waymo would be acting as the carrier, offering its autonomous trucks as assets for shippers on Uber’s marketplace.

Aurora Innovation, a Waymo Via competitor in which Uber has a stake after selling Aurora its own self-driving unit, Uber ATG, is currently conducting a similar pilot with Uber Freight in Texas.

Ultimately, Waymo is pursuing a driver-as-a-service (DaaS) approach, wherein carriers will buy Daimler trucks that are operated by the Waymo Driver. During the second phase of Waymo’s partnership with Uber, carriers that operate Waymo Driver-equipped trucks will be able to seamlessly opt into the Uber Freight network, which the companies say will help carriers scale their businesses.

“This is a deep integration between our products where we’ll develop a joint product roadmap to build tools and infrastructure specific to the successful deployment of autonomous trucks on the Uber Freight network, such as an integration that allows carriers to seamlessly freight match and execute loads with Waymo Driver-enabled trucks on the Uber Freight network,” a Waymo Via spokesperson said in a statement shared with TechCrunch.

READ MORE:  How To Inspire Content Teams To Care About SEO

The spokesperson also said Uber Freight and Waymo Via align on a hybrid freight model that still relies on human-driven trucks but leverages an autonomous solution to help reduce some of the strain on an industry that’s facing a truck driver shortage.

“Uber Freight’s extensive, efficient and reliable digital network is essential to making autonomous trucks a reality,” said Lior Ron, head of Uber Freight, in a statement. “We are uniquely positioned to be the preferred network for autonomous trucks, with the scale and the marketplace expertise to deploy autonomous trucks in a way that benefits the entire industry.”

Waymo did not share how many test vehicles it would be using during the initial pilot, but in both near and long term, trucks operated by the Waymo Driver will begin driving on Interstate 95 in Texas between Dallas and Fort Worth before scaling out, according to a Waymo spokesperson. Waymo did not provide a timeline for when it intends to begin its DaaS approach or scale beyond the initial autonomous lane in Texas.