You Are Here: Home » Watson-Crick Hypothesis of the Structure of DNA Molecule 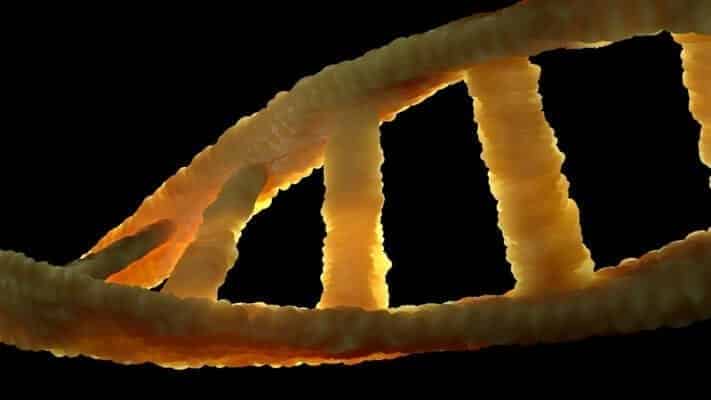 In 1953 the whole situation of understanding the structure of DNA molecule was changed when James Watson and Francis Crick, working together at the Cavendish Laboratory in Cambridge, put forward a possible structure for the DNA molecule. This was the turning point in our concept of the gene.

Let us briefly consider their proportion. Some years before it had been found by direct chemical analysis of DNA that, irrespective of the source of the DNA, the ratio of adenine to thymine, and of guanine to cytosine, is always one. in other words it appears that there are always the same number of adenine and thymine molecules, and guanine and cytosine molecules. However, no such fixed relationship was found between adenine and cytosine or guanine and thymine. To Watson and Crick this suggested that the structure of DNA molecule might consist of two parallel strands held together by pairs of bases; adenine being paired with thymine, and guanine with cytosine.

Meanwhile attempts had been made to work out the structure of the DNA molecule by X-ray diffraction analysis. Despite various technical difficulties, mainly caused by DNA’s reluctance to crystallize, some reasonably clear X-ray photographs were obtained, notably by Maurice Wilkins and his colleagues at King’s college, London.  Interpreting X-ray diffraction patterns is no easy matter at the best of times and for a large and complex molecule liked DNA it is particularly difficult, especially when the pattern are rather diffuse. However, Watson and Crick set to work on the X-ray patterns and came to the conclusion that the DNA molecule consists of two parallel chains twisted to form a double helix.  From the relative position of certain spots in the X-ray photographs they concluded that the two chains are cross-linked at regular intervals corresponding to the nucleotides and that there are ten nucleotides for one complete turn of the helix.

Watson and Crick thus envisaged the structure of DNA molecule as a kind of twisted ladder, the two upright consisting of chains of alternating sugar and phosphate groups, the rungs as pairs of bases sticking inwards towards each other and linked up in a specific relationship: A with T  and C with G.

They then proceed to build molecular models based on this idea. Accurate models of the four different types of nucleotides with all their atoms and bonds in the right places were fitted together in various ways. By trial and error it was found that the only satisfactory arrangement was to have the two chains running in opposite directions, and the bases linked A with T and C with G by hydrogen bonds. When their model of the DNA molecule was complete they worked out what its X-ray diffraction pattern should be and found it to agree very closely with the pattern actually obtained by Wilkins.

The complementary relationship between the pairs of bases has been confirmed by studying their 3-dimensional shape or stereochemistry. Thymine and cytosine are pyrimidine bases consisting of a single hexagonal ring. Adenine and guanine, on the other hand, are purine bases consisting of hexagonal ring joined to a pentagonal ring.  The rungs in the DNA ladder can only be formed by linking purine with pyrimidine bases: their relative sizes are such that there would be insufficient room for two purines and too much room for two pyrimidines. The bases are held together by hydrogen bonds and the position of the hydrogen atoms in relation to the shape of the molecule ensures that A can only link with T, and C with G rather like the fitting together of complementary pieces in a jig-saw puzzle.

READ MORE:  The Role of DNA in Protein and Enzyme Synthesis

How Senescence Affects the Elderly?