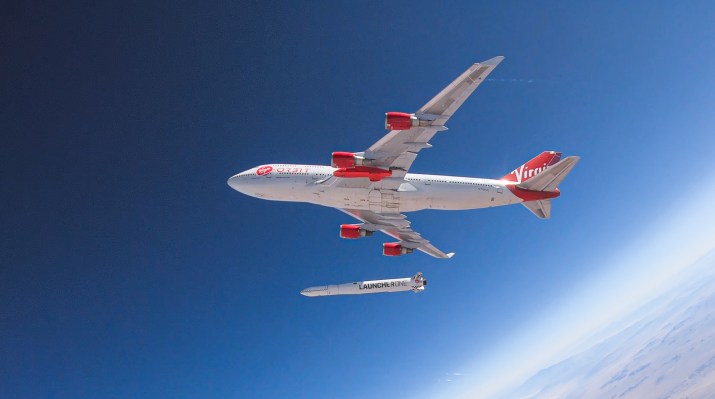 We’re sorry in advance for getting Paula Abdul stuck in your head today.

Virgin Orbit is ready to launch the “Straight Up” mission this evening at 10 PM PDT — yes, it’s named after the singer’s 1988 hit — and you can watch it live below.

The mission will ferry seven experimental satellites to orbit for the United States Space Force, demonstrating both new hardware (a new satellite bus and radio communications technology) and software (regarding satellite monitoring and studying climate change).

They’ll be taken to orbit via Virgin Orbit’s “horizontal” launch system: The LauncherOne rocket is released from the belly of a modified Boeing 747 aircraft named Cosmic Girl while the aircraft is in mid-flight. The plane will take off from Mojave Air and Space Port in California before flying over the Pacific Ocean, where LauncherOne will be released to deliver its payload to a 500-kilometer orbit.

“Our hardware is in top-notch condition, and the team is performing exceptionally, as we prepare for our first night-time launch,” Tyler Grinnell, Virgin Orbit’s vice president of Test, Flight, and Launch, said in a press release. “The perspective we’ve gained from each previous launch is really paying off now. Our crews in the sky and on the ground are ready to further our mission of getting our customers’ satellites precisely where they need to go.”

“Straight Up” will be Virgin Orbit’s fourth commercial launch — an impressive cadence given that the company’s first commercial launch only happened a year ago, on June 30, 2021. It has big plans for the rest of 2022 as well. The United Kingdom has tapped Virgin Orbit to execute the first-ever rocket launch on U.K. soil, which is currently expected to happen in September. That mission, dubbed Prometheus-2, is a joint mission between the U.K.’s Ministry of Defence and the U.S. National Reconnaissance Office (NRO).

The launch window for “Straight Up” opens tonight at 10 PM PDT, with the livestream beginning 30 minutes prior, at 9:30 PM PDT. Watch it below, or tune into the feed here.