As we shall see later, the viscosity of a lubricating oil is one of the factors which decide whether it is suitable for use in an engine. The Ministry of Aircraft Production, for example, listed viscosity values to which lubricating oils for aero-engines must conform. The subject of viscosity has thus considerable practical importance.

Newton’s Formula and Coefficient of Viscosity

When water flows slowly and steadily through a pipe, the layer A of the liquid in contact with the pipe is practically stationary, but the central part C of the water is moving relatively fast. At other layers between A and C, such as B, the water has a velocity less than at C, the magnitude of the velocities being represented by the length of the arrowed lines now as in the case of two solid surfaces.

Thus if A is the area of the liquid surface considered, the frictional force F on the surface is given by

where ŋ is a constant of the liquid known as the coefficient of viscosity.

Definition, Units, and Dimensions of Coefficient of Viscosity

The magnitude of ŋ is given by

Since F = ŋA x velocity gradient, the frictional force on an area of 10cm2 in water at 10oC between two layers of water 0.1 cm apart which move with a relative velocity of 2 cm s-1 is found as follows: 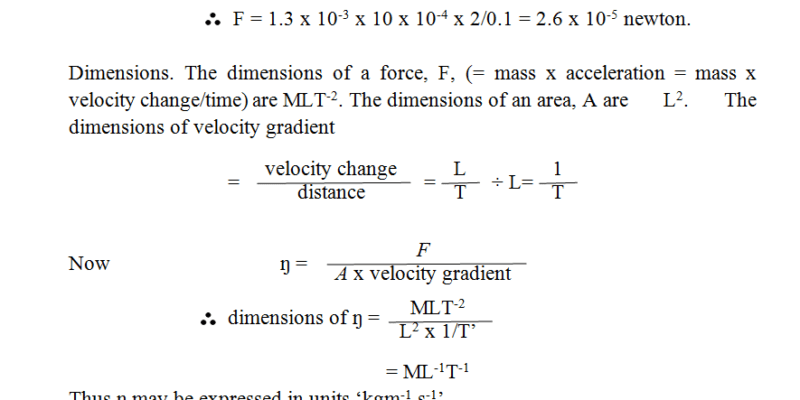 Steady Flow of Liquid Through Pipe: The Poiseuille’s Formula

The steady flow of liquid through a pipe was first investigated thoroughly by Poiseuille in 1844, who derived an expression for the volume of liquid issuing per second from the pipe. The proof of the formula is given on page****. But we can derive most of the formula by the method of dimensions.

The volume of liquid issuing per second from the pipe depends on (i) the coefficient of viscosity, ŋ, (ii) the radius, a, of the pipe, (iii), the pressure gradient, g, set up along the pipe. The pressure gradient = p/l, l is its length. Thus x, y, z being indices which require to be found, suppose 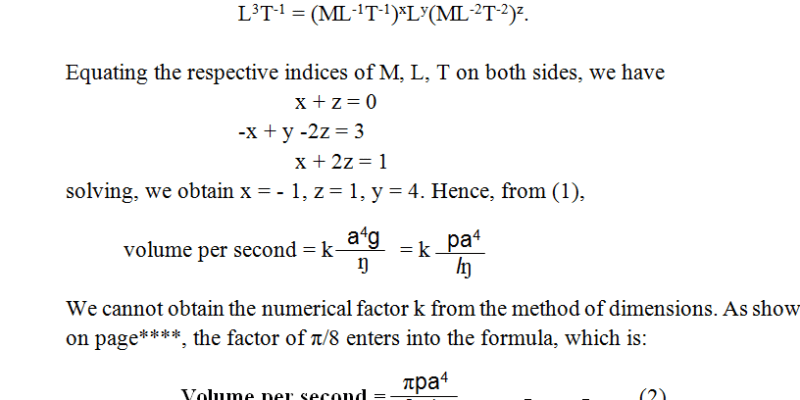