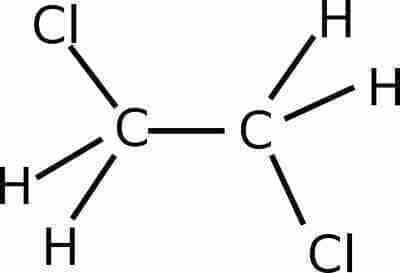 – Appearance: Ethylene di chloride is a colourless liquid with a chloroform-like odour.

– Odor: It has a characteristic, pleasant chloroform-like odor.

Other names: Ethylene Dichloride is also known as:

Compound type: It is a chlorinated hydrocarbon.

Direct chlorination is done in the liquid phase where the liquid chlorine and pure ethylene are reacted in the presence of ferric chloride, although other catalysts have been suggested. The reaction can take place at either a low (20-70oC) or high (100-150oC) temperature. The low temperature process has an advantage of low by-product formation but it requires more energy to get back the EDC. While the high temperature process utilises the heat of reaction present in the distillation of the EDC, leading to considerable energy savings.

In the oxychlorination process, pure ethylene and hydrogen chloride, mixed with oxygen, are reacted at 200-300oC and 4-6 bar in the presence of a catalyst called the cupric chloride. The reaction usually takes place in either a fluid bed or a fixed bed reactor, the fluid bed being preferred, because it is easier to control the temperature. The oxychlorination unit can use air or pure oxygen but the oxygen-based route is favoured on mostly environmental and efficient grounds.

The new catalyst called “Vinnolit” is an inorganic complex, which increases the velocity of chlorine-addition to ethylene. This positive effect is gotten over a wide temperature range. The catalyst is charged to the reactor before start-up or during normal operations. There is no catalyst consumption in a normal operation, and a refill is not required. The catalyst can also be used in a liquid-loop-reactor and also in a boiling reactor. The EDC produced has a quality which allows direct feed to the EDC cracker without any distillation.

Be the first to comment on "Uses, Properties and Production of Ethylene Dichloride"