Gold-Leaf Electroscope is one of the instruments used for testing positive and negative charges. It consisted of a metal rod, A to which gold leaves, L were attached (See image below). 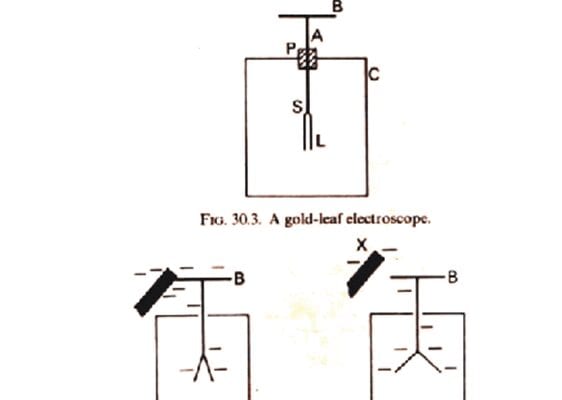 The rod was fitted with a circular disc or cap B; and was translated with a plug P from a metal case C which screened L from outside influences other than those bought near to B.

We shall now show that it is possible to obtain charges, called induced charges, without any contact with another charge. An experiment on electrostatic induction, as the phenomenon is called, is shown in Fig. below(i). Two insulated metal spheres A, B are arranged so that they touch one another, and negatively charged ebonite rod C is brought near to A. The spheres are now separated, and then the rod is taken away. Tests with a charged pith-ball now show that A has a positive charge and B a negative charge (Fig. below(ii)). If the spheres are placed together so that they touch, it is found that they now have no effect on a pith-ball held near. Their charges must therefore have neutralized each other completely, thus showing that the induced positive and negative charges are equal. This is explained by the movement of electrons from A to B when the rod is brought near. B has then a negative charge and A an equal positive charge.

Induction and the Gold-Leaf Electroscope

We can use induction to give a permanent charge to the capo and leaves of a gold-leaf electroscope, by momentarily earthing the cap while holding an inducing charge near it.

The electrophorus is a device which provides an almost unlimited supply of charge, by induction, was invented by Volta about 1800; it is called an electrophorus. It consists of an ebonite or Perspex base, E in ( Fig. below), and a metal disc D on an insulating handle. The ebonite is charged negatively by rubbing it – or, much better, beating it – with fur. The disc is then laid upon it, and acquires induced charges, positive underneath and negative on top, (i). Very little negative charge escapes from the ebonite to the disc, because the natural unevenness of their surfaces prevents them touching at more than a few points; charge escapes from these points only, because the ebonite is a non-conductor. After it has been placed on the ebonite, the disc is earthed with the finger, and the negative charge on its upper surface flows away, (ii). The disc can then be removed and carries with it the positive charge which was on its underside, (iii).

An electrophorus produces sufficient charge to give an audible – sometimes a visible – spark. The disc can be discharged and charged again repeatedly, until the charge on the ebonite has disappeared by leakage. Apparently, therefore, it is in principle an inexhaustible source of energy. However, work is done in raising the disc from the ebonite, against the attraction of their opposite charges, and this work must be done each time disc is charged; the electrophorus is therefore not a source of energy, but a device for converting it from a mechanical into an electrical form.

The action of the electrophorus illustrates the advantages of charging by induction. First, the supply of charge is almost inexhaustible, because the original charge is not carried away. Second, a great charge – nearly equal to the charge on the whole ebonite – can be concentrated on to the conducting disc. As we have seen, only a very small charge could be transferred by contact, because the ebonite is not a conductor.