A device which provides an almost unlimited supply of charge, by induction, was invented by Volta about 1800; it is called an electrophorus. It consists of an ebonite or Perspex base, E in the diagram below and a metal disc D on an insulating handle. The ebonite is charged negatively by rubbing it or, much better, beating it with fur. The disc is then laid upon it, and acquires induced charges, positive underneath and negative on top, (i). very little negative charge escapes from the ebonite to the disc, because the natural unevenness of their surfaces prevents them touching at more than a few points; charge escapes from these points only, because the ebonite is a non-conductor. After it has been placed on the ebonite, the disc is earthed with the finger, and the negative charge on its upper surface flows away, (ii). The disc can then be removed, and carries with it the positive charge which was on its underside, (iii).

An electrophorus produces sufficient charge to give an audible and sometimes a visible spark. The disc can be discharged and charged again repeatedly, until the charge on the ebonite has disappeared by leakage. Apparently, therefore, the electrophorus is in principle an inexhaustible source of energy. However, work is done in raising the disc from the ebonite, against the attraction of their opposite charge, and this work must be done each time the disc is charged; the electrophorus is therefore not a source of energy, but a device for converting it from a mechanical into an electrical from.

The action of the electrophorus illustrates the advantages of charging by induction. First, the supply of charge is almost inexhaustible, because the original charge is not carried away. Second, a great charge nearly equal to the charge on the whole of the ebonite can be concentrated on to the conducting disc. As we have seen, only a very small charge could be transferred by contact, because the ebonite is not a conductor.

The Working Principles of a Microphone

We now consider the principles of some microphones, instruments which convert sound energy to electrical energy. Details of microphones can be obtained from specialist works.

This type of microphone is used in the hand set of telephone. It contains carbon granules, C, whose electrical resistance decreases on compression and increases on release. Thus when sound waves are incident on the diaphragm D, a varying electric current of the same sound or audio frequency is produced along the telephone wires. The carbon microphone is a ‘pressure’ type since the magnitude of the current depends on the pressure changes in the air.

This is a sensitive microphone, with a uniform response over practically the whole of the audio-frequency (af) range from 40 to 15000 Hz. It has a corrugated aluminum ribbon R clamped between two pole-pieces N, S of a powerful magnet. When sound waves are incident on R, the ribbon vibrates perpendicular to the magnetic field. A varying induced emf of the same frequency is therefore obtained, as shown, and this is passed to an amplifier. The ribbon microphone is a ‘velocity’ type, since the movement of R depends on the velocity changes in the air particles near it.

READ MORE:  Laboratory and Industrial Uses of Multimeter and Voltmeter

Moving – coil microphone(see diagram below). This is also a sensitive microphone, widely used. A coil X, made from aluminum tape so that it is very light, is situated in the radial field between the pole-pieces N, S o a magnet M. when sound waves are incident on a diaphragm Y attached to x, the coil vibrates and ‘cuts’ magnetic flux. The varying induced emf obtained is passed to an amplifier. The moving-coil microphone is a pressure type. To avoid any effect of fluctuations in atmospheric pressure during use, the inside is kept at atmospheric pressure by means of a tube T.

The moving-coil loudspeaker is used to reproduce sound energy from the electrical energy obtained with a microphone. It has a coil C or speech coil, wound on a cylindrical former, which is positioned symmetrically in the radial field of a pot magnet M.  A thin cardboard cone D is rigidly attached to the former and loosely connected to a large baffle-board B which surrounds it.

When C carries audio-frequency current, it vibrates at the same frequency in the direction of its axis. This is due to the force on a current carrying conductor in a magnetic field, as seen in the diagram below, whose direction is given by Fleming’s left-hand rule. Since the surface area of the cone is large, the large mass of air in contact with it is disturbed and hence a loud sound is produced.

When the cone moves forward, a compression of air occurs in front of the cone and simultaneously a rarefaction behind it. The wave generated behind the cone is then 180o out of phase with that in front. If this wave reaches the front of the cone quickly, it will interfere appreciably with the wave there. Hence the intensity of the wave is diminished. This effect will be more noticeable at low frequency, or long wavelength, as the wave behind then has time to reach the front before the next vibration occurs. Generally, then, the sound would lack low note or bass intensity. The large baffle reduces this effect appreciably. It makes the path from the rear to the front so much longer that interference is negligible.

Telephone earpiece, represented in the diagram below. This has speech coils C wound round soft-iron cores, which have a permanent magnet M between them. The varying speech current produces a corresponding varying attraction on the soft-iron diaphragm D, which thus generates sound waves of the same frequency in the air. The sound is soft because the mass of air in contact with D is small. The permanent magnet is necessary to prevent distortion and to make the movement of D more sensitive to the varying attractive force. 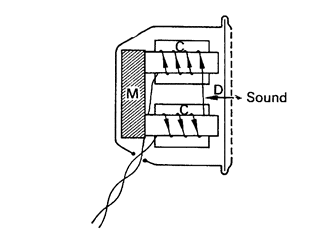