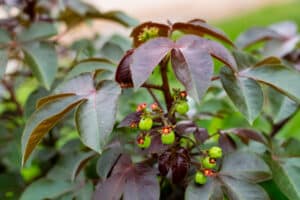 Jatropha is a genus of flowering plants in the Euphorbiaceae spurge family. The name is derived from the Greek words (iatros), which means “physician,” and  (trophe), which means “nutrition,” hence the common name physic nut. Nettlespurge is another common name for this plant.

It is home to approximately 170 succulent plant, shrub, and tree species (some are deciduous, like Jatropha curcas). With 66 species found in the Old World, the majority of these are native to the Americas.

These plants produce male and female flowers separately. As with many members of the Euphorbiaceae family.

In the 2000s, one species, Jatropha curcas, sparked interest as an oil crop for biodiesel production as well as medicinal value when used as lamp oil; native Mexicans in the Veracruz area developed a Jatropha curcas variant lacking toxic compounds, yielding a higher income when used as a source for biodiesel due to its edible byproduct. Toxicity may return if toxic types pollinate edible Jatropha.

READ MORE:  A broad review on the safety of aged lithium-ion batteries

Medicinal Properties of the Jatropha Plant

The Negative Effects of Excessive Consumption of Jatropha Plant

Members of the genus Jatropha, like other members of the Euphorbiaceae family, contain a number of toxic compounds.

Despite this, the seeds are occasionally consumed after being roasted, which reduces some of the toxicity. Its sap is a skin irritant, and just three untreated seeds can be fatal to humans.

Western Australia banned Jatropha gossypifolia in 2005 because it was invasive and highly toxic to humans and animals. It is still used as medicine in some areas, but one study discovered that the dried leaf has no antifungal activity.

Here are some of the negative effects of consuming the plant.