Not quite many know about the darkest part of the sky, but we shall be going through all that. If you have only learned one awesome thing about astronomy and the universe’s expansiveness is probably that our universe is 13.8 billion years old and even space itself is expanding. But another cool stuff about astronomy which you might or might not have heard of is ‘The Hubble Deep Field’. 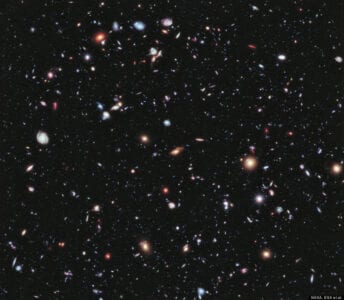 What Is The Hubble Deep Field?

According to Wikipedia, The Hubble Deep Field is said to be an image of a small region in the constellation Ursa Major, constructed from a series of observations by the Hubble Space Telescope.

Back in the year 1995, scientists chose the darkest part of the night sky and focused the hubble space telescope there for a total of 10 consecutive days and though this seems like a risk for the astronomers as time in the hubble field is very competitive, and everyone was curious about whether or not, they could find anything interesting in the dark sky. But here are images of what they discovered under 10 days: 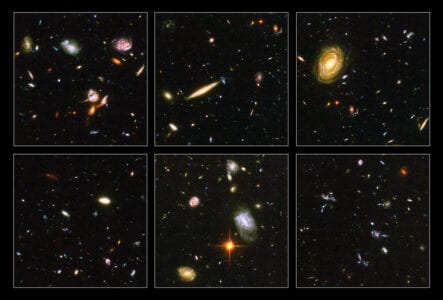 Most of the dots you see in the image above are galaxies, these images were the first to look back on as the oldest galaxies in the universe, Which helped us discover alot about the universe and made scientists to repeat the process again which brought about the discovery of both ‘The Hubble Ultra Deep Field’ and ‘The Hubble eXtreme Deep Field’.

Here is an image of the Hubble Ultra Deep Field: 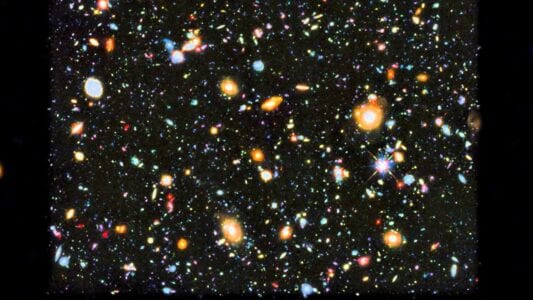 The Hubble Ultra Deep (UDF), is said to have an angular size of 11.5 square arcminutes, a total of 10,000 galaxies and also contains 123 quintillion stars, with ‘The Red Dwarf UDF 2457′ being it’s furthest star to be discovered. The Hubble Ultra Deep field is also 5 – 10 billion light-years far away from earth.

Below is an image of the Hubble eXtreme Deep Field: 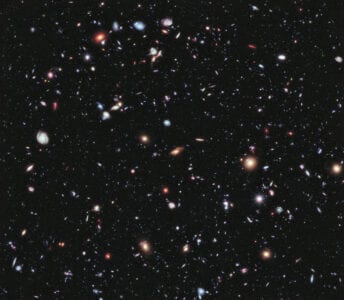 The Hubble eXtreme Deep Field (XDF), is a combination of all the previous hubble observations of a small patch of sky in the constellation of Fornax. With a sum of over 2 million seconds of exposure time, it is also said to be the universe deepest image ever created.

Now, for those wondering what is the Hubble Space Telescope? or How it got it’s name???, Below is the information we could gather about it. 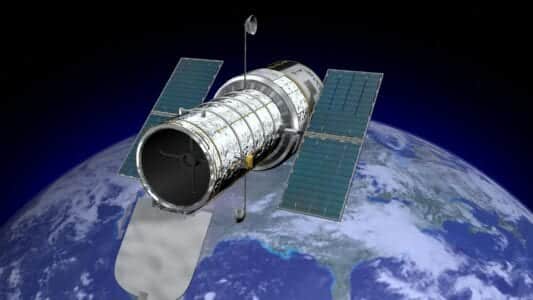 HST / Hubble otherwise known as The Hubble Space Telescope is an optical telescope also the first of it’s kind, which was built from the cooperation of NASA and ESA. The main purpose of it’s creation was to help scientists understand how planets and galaxies form. Most of the pictures taken with the Hubble has helped scientists study and understand more about the whole universe. It was also named after the American astronomer of the 20th century ‘Edwin Hubble’. This project was launched in the year April 24 1990.

The Hubble is said to be currently located about 340 miles, which is 547 kilometers above Earth’s surface.

The Hubble is also said to complete a total sum of  15 orbits per day, which is approximately one every 95 minutes.

According to NASA, the Hubble has a lifespan of 15 years, which simply means it needed it’s instruments to be either replaced every 15 years either on ground or serviced in the orbit. But due to the massive financial cost of the Hubble’s instruments, The Hubble has now become one of the most expensive spacecraft in the world.

Who Was Edwin Hubble? 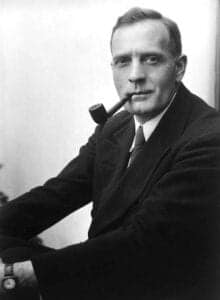 Edwin Hubble otherwise known as Edwin Powell Hubble was a 20th century, born in the year November 20, 1889 in the United States Of America (USA). Also died in the year September 28 1953 in California (USA). Edwin Powell Hubble was an American astronomer who played an important role in establishing the field of extra-galactic astronomy and is now known as one of the greatest and leading observational cosmologist of the 20th century.

READ MORE:  Components of the Ecosystem

Edwin Powell Hubble was a student in the University of Chicago, where he got a scholarship and served as one of Robert Millikan’s Students, who won Physics Nobel Prize in the year 1923 for his awesome work on the elementary charge of electricity and his work on the photoelectric effect, We would cover a brief history on Robert Millikan later on.

Edwin Powell Hubble also won a scholarship after his graduation in the year 1910, where he studied at the University Of Oxford and got awarded a Bachelor Of Arts (B.A) in Jurisprudence. This was a course he chose based on his father’s advice, but after the tragic death of his father, Edwin Powell Hubble began his scientific career where he would later discover many things.

We would later write a full documented history about Edwin Powell Hubble.