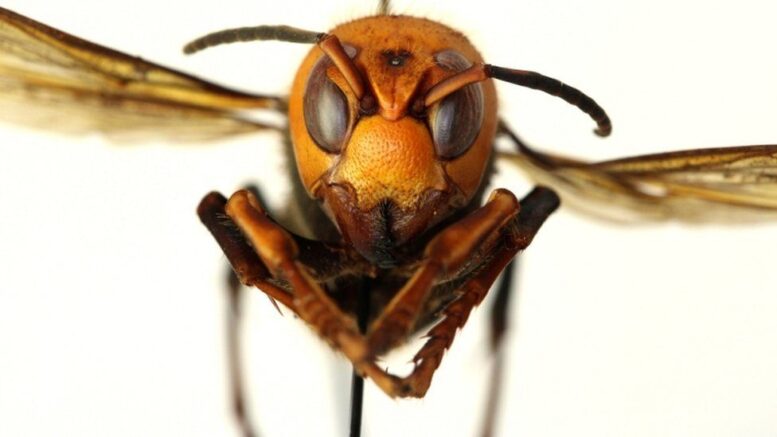 Ever been taking a walk and you felt a sudden sharp pain that hurts more than a bee’s sting?, was it a murder hornet that stung you? Today we shall be discussing about the murder hornets and how dangerous and deadly they are.

The Asian Giant Hornets, nicknamed “The Murder Hornets” are the largest, and one of the deadliest insects on earth.

These big, orange and black colored insects, are extremely fast, flying at a speed of 40km/hr.
They grow 2 inches(5 centimeters) long, and their wingspans exceed 2.8 inches (7 centimeters) long.

The Vespa mandarinia species, which are mostly seen in Asia, avoid plain species and prefer living in forests and mountains.
They build a nest every year and make sure their nests are not two meters above the ground. 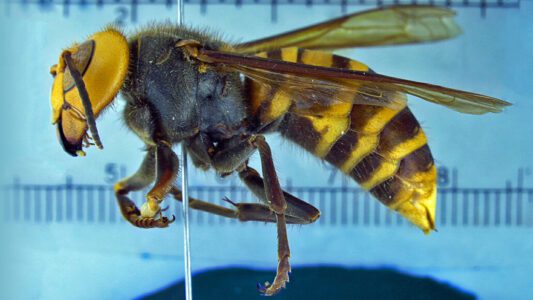 These beasts got their nickname from how they prey on bees. They destroy bee populations, and colonies with ease and feed them to younger hornets. A dozen murder hornets can destroy an entire beehive, which contains a thousand bees. After they attack these bees, they cut off their legs, abdomen, head and their thorax which is rich in protein.

A giant hornet’s sting can deliver 1,100 micro-grams of venom and have a 50% chance of killing a large rodent on its first touch. In late 2019, these deadly insects were found in North America. It isn’t clear how far the species have spread on the continent but beekeepers are about the impact of its arrival. Expert beekeepers have stated that the only way to avoid an invasion by these hornets, is by discovering and destroying them before they multiply.

What Happens If A Murder Hornet Stings A Human?

Humans are not the insect’s target, but if provoked or threatened, they can kill people too. A 2007 report shows that 30 to 50 Japanese citizens die every year from the insect’s sting.
42 people were killed and 1,600 injured from the hornets’ sting in 2013. These hornets build their nests underground, so they can sneak on humans unawares. 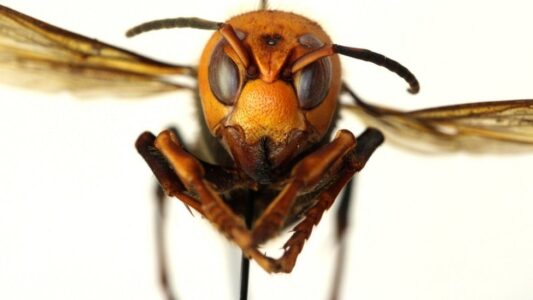 One sting from a murder hornet can cause severe damage to a human. The pain of its sting is equated to the pain of a hot nail on your skin. These are from their long stingers, which are painful when touched and can puncture protective and thick clothing like a beekeeper’s suit.

A beekeeper who destroyed one of the hornet’s hives told the New York Times that “It was like hot thumbtacks were being driven into my flesh”. The most deadly thing is the neurotoxin that they inject into your body after a sting.
It’s called medoraltoxin, and it destroys your red blood cells once you are stung. The toxins are so strong that they can dissolve your skin and make it swell and the pain from one sting can cause you to collapse and make it impossible for you to move.

The pain can make you unconscious , The medoraltoxin will now shut down your organs and kill you.
And even after death, these insects will continue to sting you until they confirm you are no longer a threat.

How Can One Be Save From A Murder Hornet?

The only way to stay safe from these deadly creatures is to stay away from their nests and report to authorities when you see their nest sightings instead of trying to kill them by yourself.

So that’s all we can discuss about the murder hornet, have you ever encountered any murder hornet? or maybe perhaps you got stung by one! Describe how it felt in the comment section.