A sine wave inverter is a device that converts DC energy from a source such as a battery or solar panel into alternating current (AC) electricity. Sine inverters are invaluable for large-scale operations where high power needs to be delivered in an efficient manner. In this article, we will discuss how sine inverters work, the different types of sine inverters and the advantages they offer to business owners.

What Is a Sine Inverter?

A sine inverter is an electrical device that converts a DC (direct current) source of power into an AC (alternating current) output. The sine inverter delivers a smooth, sinusoidal waveform, hence its name. By doing this, it produces a sine wave rather than the abrupt square wave produced by a standard inverter. This means that the power supplied is clean and efficient.

How Does a Sine Inverter Work?

A sine inverter uses a complicated system of circuits including transformers and IGBTs (insulated gate bipolar transistors) to convert the DC source of power into an AC output. The power is generated by passing the negative and positive DC ends of the source through the circuitry, which is then output as an AC source. 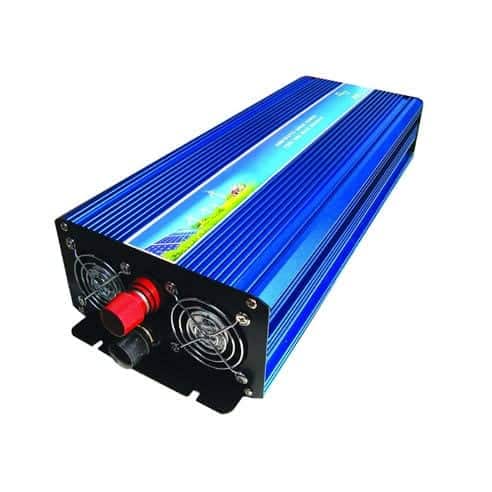 Pure sine wave inverters are considered to be the most reliable and advanced option among all the inverter types. These solar inverters convert DC power into AC electricity, generating a “perfect” sine wave. They are very efficient in filtering out the interfering noise and low-frequency ripple and provide stable, clean power that is free of any voltage fluctuations and distortion. Apart from the robust power output, pure sine wave inverters are also known for their high efficiency while converting the AC power into usable electricity.

Pure sine wave inverters offer the highest efficiency but are the most expensive.

Hybrid inverters offer some of the best features with a mixed combination of features from the above-mentioned inverters. The combination of features makes it highly efficient for a wide range of solar energy systems. These include those designed for those with smaller-scale applications, such as residential homes or small business complexes. Hybrid inverters allow users to easily switch to AC power when needed, without the need to make any major hardware changes.

Hybrid inverters are quite popular as they offer a good balance between cost and efficiency.

An uninterruptible power supply is a specialized power source that provides emergency electricity when the power source is lost or disrupted. They are commonly used in data centers, locations with critical equipment, and other places where sudden power outages may cause damage or inconvenience. Depending on their power output, they can provide emergency power to the device they are plugged into indefinitely, or until the power is restored.

Inverters and uninterruptible power supplies are critical components in any power system, and it is important to understand the differences between the various types of power sources. While they may appear similar, they offer different functionalities and advantages, making them useful in different scenario

Sine wave inverters offer many advantages that make them ideal for business settings, particularly where high power needs to be delivered in an efficient and reliable manner. The main advantages include higher efficiency and better performance, clean power delivery and increased safety. As sine inverters deliver a smooth sinusoidal power, less power is lost due to heat and fragility of appliances is decreased as the power load is evenly distributed. They are also more reliable than conventional inverters as they are less prone to surges and overloads.

Sine wave inverters have become increasingly popular due to their superior efficiency and reliable performance. Their clean output and increased safety make them ideal for commercial settings where high power needs to be delivered in an efficient and reliable manner. At the same time, their cost-effectiveness makes them a valuable investment for large-scale operations.