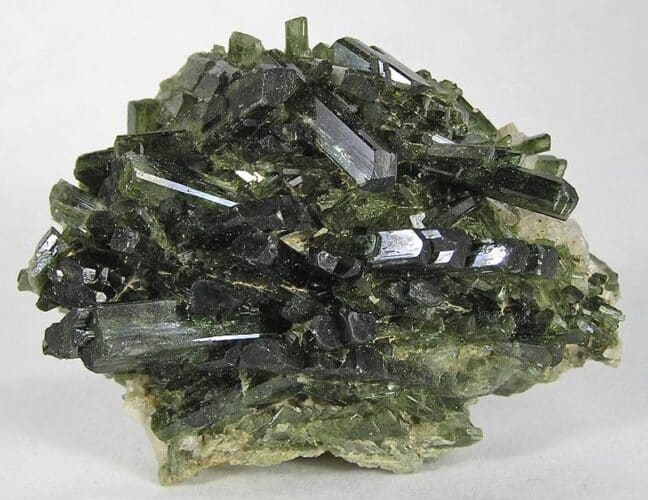 What Exactly Are Pyroxenes?

Pyroxene is the name given to a group of dark-colored rock-forming minerals that can be found in igneous and metamorphic rocks all over the world. They form under high temperature and/or high pressure conditions.

Augite, diopside, jadeite, and spodumene are four of the most well-known pyroxene group members; however, the pyroxene group contains many other members.

Z can be Si, Al, or a combination of the two.

In the X and Y positions, a wide range of cation substitutions can occur.

Examples of individual pyroxene minerals that hold a place in industry and commerce are described below:

Spodumene is frequently found in colorful gem-quality crystals. Mineral collectors prize these beautiful blade-shaped crystals. When they are cut into gems, they are given varietal names based on their color: kunzite (pink), hiddenite (green), and triphane (yellow).

Spodumene was once the most important ore of lithium metal – until the late 1900s, when high-concentration lithium brines were discovered in Argentina, Chile, China, and other places. These brines can be pumped to the surface and allowed to evaporate, after which lithium can be extracted easily from the evaporite material. Today, spodumene is used to produce very little lithium.

The only minerals that can legally be called “jade” in commerce are jadeite (a pyroxene) and nephrite (a member of the amphibole mineral group). Both of these minerals are used to make cabochons, beads, bangles, small sculptures, and various utility items. Jadeite is the most valuable gemstone in China, where it has been revered for thousands of years.

In Asia, high-quality jadeite can sell for prices comparable to diamonds per carat.

Although jadeite is not a particularly hard mineral, it is a particularly tenacious mineral, which means it is a long-lasting material that resists breaking. In parts of the world where the mineral was easily found as stream pebbles, cobbles, and talus, ancient people discovered this property and used jadeite to make weapons, impact tools, and cutting tools.

Rondelle-shaped beads made from Russia’s bright green chrome diopside. The beads range in diameter from 3 to 5 millimeters.

Diopside is most commonly found as a bright green, translucent to transparent gem cut into faceted stones, cabochons, and beads. Its green color is often bright enough that it is mistaken for emerald. Fine prismatic crystals of magnetite can be found in a rare variety of diopside known as “star diopside.” They have a silver four-ray star when polished en cabochon. The property of displaying a star is referred to as “asterism.”

Ceramics, glassmaking, biomaterials, nuclear waste immobilization, and fuel cell technology could all benefit from diopside. Unfortunately, natural diopside is rarely found in deposits that are large, pure, and in a location that allows for economic mining. As a result, synthetic diopside is cost-competitive with mined diopside.

In the construction industry, “trap rock” refers to any dark-colored igneous rock used to make crushed stone. These are typically diabase, gabbro, basalt, or peridotite that contain pyroxene minerals in significant amounts.

READ MORE:  Horses Have an Extraordinary Ability to Help Humans

Pyroxenes are also common minerals in peridotites. Upper mantle rocks are mostly made up of olivine and pyroxenes.

Pyroxenes are common accessory minerals in granite, rhyolite, diorite, and andesite in the continental crust. The accompanying chart shows a graphical representation of the presence of pyroxene in various igneous rocks.

Pyroxenes are uncommon in sedimentary rocks because they rarely form at low temperatures and are easily weathered chemically and physically.

Pyroxenes are found in a variety of igneous and metamorphic rocks in the Earth’s crust. They are most abundant in the dark-colored igneous rocks that make up the majority of the oceanic crust, such as basalt and gabbro. The most abundant minerals in these rocks are pyroxenes and plagioclase feldspar.

The majority of pyroxenes are not commonly used as industrial minerals. Pyroxene minerals are minor to secondary constituents of some rocks used for crushed stone and dimension stone. A few pyroxene minerals are used as gem materials, but only when they have appealing color and clarity. The most important pyroxene gem materials are jadeite, diopside, and spodumene. Spodumene was once a significant lithium source.