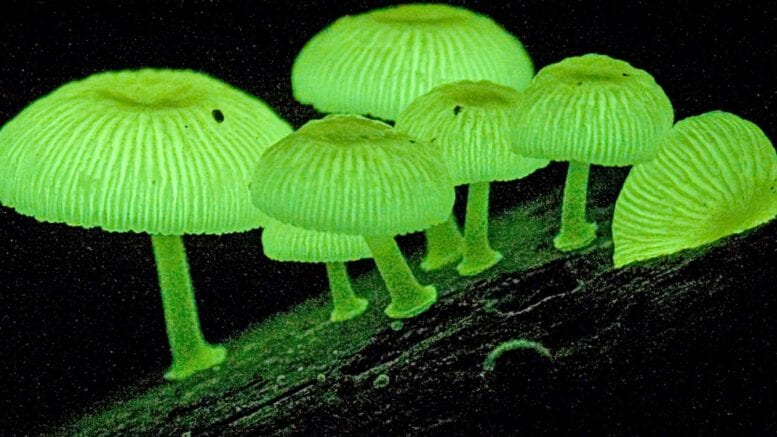 The fungi are included in the plant kingdom but in many ways they are white different from Green plants. The basic unit of a fungus is a hypha, not a cell, although in some species the hollow tubes of the hyphae may be divided into cells by cross-walls. The cell walls may be of a nitrogenous compound and not of cellulose, though some scientists think that cellulose is present but not easily demonstrable. There is a central vacuole to each hypha; the cytoplasm forms a lining within the cell wall, and many nuclei are embedded in this cytoplasm. Where the hyphae are divided into cells, there may be one or more nuclei in each cell.

There are no chloroplasts or chlorophyll in the fungi and the food particles in the cytoplasm may be oil droplets or glycogen, but not starch. The hyphal threads spread out over and into the food material making a visible mesh or “mycelium”. In some fungi they are massed together to make the familiar “fruiting bodies” of mushrooms and toadstools, though the organization and division of labor in the hyphae is never so complex as in flowering plants.

The absence of chlorophyll means that fungi cannot synthesize food from simple substances such as carbon dioxide and way, as is done in photosynthesis, but must take in organic matter derived from other living organisms. Fungi are either saprophytic or parasitic. The parasitic ones live on or in the tissues of another living organism, the host, absorbing nourishment from its body. Some of the most devastating diseases of crops are due to parasitic fungi such as potato blight.

The saprophytes derive their food from dead and decaying materials. Examples are the moulds which develop on stale damp food and many fungi which live in the soil and feed on the humus there. Both parasitic and saprophytic fungi can produce enzymes at the growing tips of the hyphae. These enzymes enable the parasitic hyphae to penetrate the cell walls of the host and, in both parasites and saprophytes, to break down the organic matter externally by digestion. The simpler, soluble substances so formed can be absorbed into the protoplasm through the cell walls.

Reproduction is typically of two kinds, asexual and sexual. In asexual reproduction, many tiny spores are produced and scattered into the air. If they land in suitable situation they grow out into new hyphae and mycelia. Sexual reproduction involves the fusion of certain masses of protoplasm specialized as gametes, and the resulting zygote may grow into a new mycelium or give rise to a spore-bearing structure.

Chytrids are the organisms found in Chytridiomycota, they are usually microscopic and aquatic. They are asexual, and produce spores which move around using flagella. The chytrid Batrachochytrium dendrobatidis causes fungal infections in frogs by burrowing under their skin.

Zygomycetes are terrestrial types of fungi that feed off of plant detritus or decaying animal material. They also grow in human food. An example of zygomycte is Rhizopus stolonifer, a mold that grows on bread. The hyphae of zygomycetes are not separated by septa, thus making their mycelia essentially one large cell with many nuclei. They reproduce asexually, through spores.

Ascomycetes are pathogens of plants and animals, including humans, and they are responsible for infections like athlete’s foot, ringworm, and ergotism, which can cause vomiting, convulsions, hallucinations, and sometimes even death.
Some ascomycetes are found inside humans, ascomycetes such as Candida albicans, a yeast fungi which is present in the respiratory, gastrointestinal, and female reproductive tracts. Ascomycetes have reproductive sacs known as asci, which produce sexual spores,they also reproduce asexually.

The Delicacy of Mushrooms and the Fatality of Consuming Amanita Phaloides

Be the first to comment on "Types of Fungi, their Reproductive and Feeding Mechanisms"