Poiseuille’s Formula holds as long as the velocity of each layer of the liquid is parallel to the axis of the pipe and the flow pattern has been developed. As the pressure difference between the ends of the pipe is increased, a critical velocity is reached at some stage, and the motion of the liquid changes from an orderly to a turbulent one. Poiseuille’s formula does not apply to turbulent motion.

The onset of turbulence was first demonstrated by O. Reynolds in 1883, and was shown by placing a horizontal tube T, about 0.5 cm in diameter, at the bottom of a tank W of water. The flow of water along T is controlled by a clip C on rubber tubing connected to T. A drawn – out glass jet B, attached to a reservoir A containing colored water, is placed at one end of T, and at low velocities of flow a thin colored stream of water is observed flowing along the middle of T. As the rate of flow of the water along T is increased, a stage is reached when the coloring in T begins to spread out and fill the whole of the tube. The critical velocity has now been exceeded, and turbulence has begun. 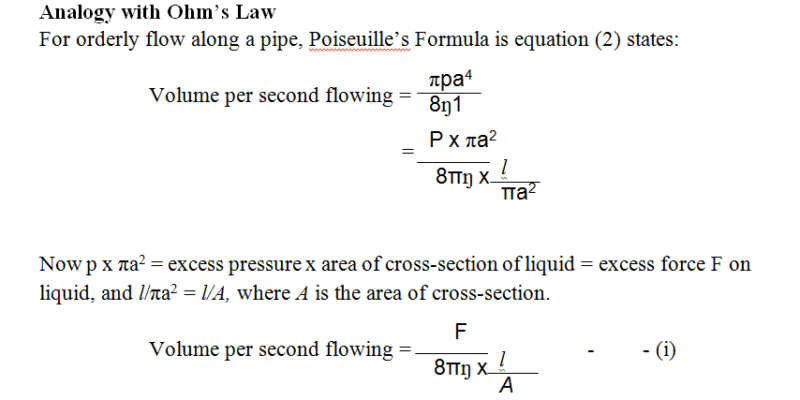 The volume of liquid per second is analogous to electric current (I) if we compare the case of electricity flowing along a conductor, and the excess force F is analogous to the potential difference (V) along the conductor. Also, the resistance R of the conductor = pl/A, where p is from Ohm’s Law, I = V/R, it follows from (i) that

8πŋ is analogous to p, the resistivity;

That is, the coefficient of viscosity ŋ is a measure of the ‘resistivity’ of a liquid in orderly flow.

Suppose a pipe of radius a has a liquid flowing steadily along it. Consider a cylinder of the liquid of radius r having the same axis as the pipe, where r is less than a. then the force on this cylinder due to the excess pressure p = p x πr2. We can imagine the cylinder to be made up of cylindrical shells; the force on the cylinder due to viscosity is the algebraic sum of the viscous forces on these shells. The force on one shell is given by ŋAdv/dr, where dv/dr is the corresponding velocity gradient and A is the surface area of the shell. And although dv/dr changes as we proceed from the narrowest shell outwards, the forces on the neighboring shells cancel each other out, by the law of action and reaction, leaving a net force of  ŋAdv/dr, where dv/dr is the velocity gradient at the surface of the cylinder. The viscous force on the cylinder, and the force on it due to the excess pressure p, are together zero since there is no acceleration of the liquid, i.e., we have orderly or laminar flow. 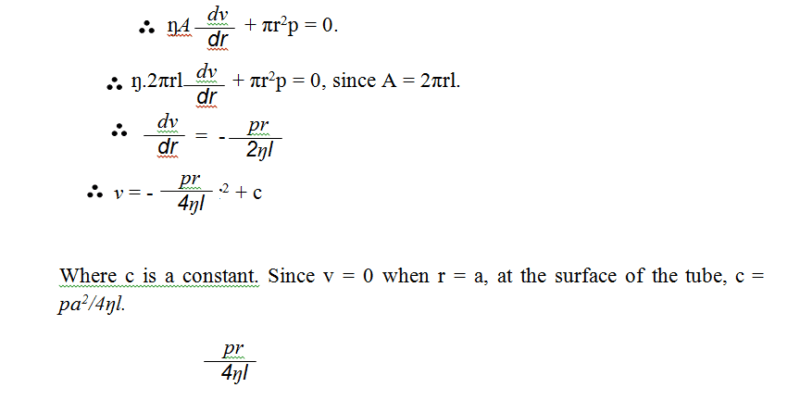 Consider a cylindrical shell of the liquid between radii r and (r + 8r). the liquid in this shell has a velocity v given by the expression in (i), and the volume per second of liquid flowing along this shell = v x cross-sectional area of shell,

Determination of Viscosity by Poiseuille’s Formula

The viscosity of a liquid such as water can be measured by connecting one end of a capillary tube T to a constant pressure apparatus A, which provides a  steady flow of liquid, by means of a beaker B and a stop-clock, the volume of water per second flowing through the tube can be measured. The pressure difference between the ends of T is hpg, where h is the pressure head, p is the density of the liquid, and g is 9.8 m s -2

where l is the length of T and a is its radius. The radius of the tube can be measured by means of a mercury thread or by microscope. The coefficient of viscosity ŋ can then be calculated, since all the other quantities in the above equation are known.