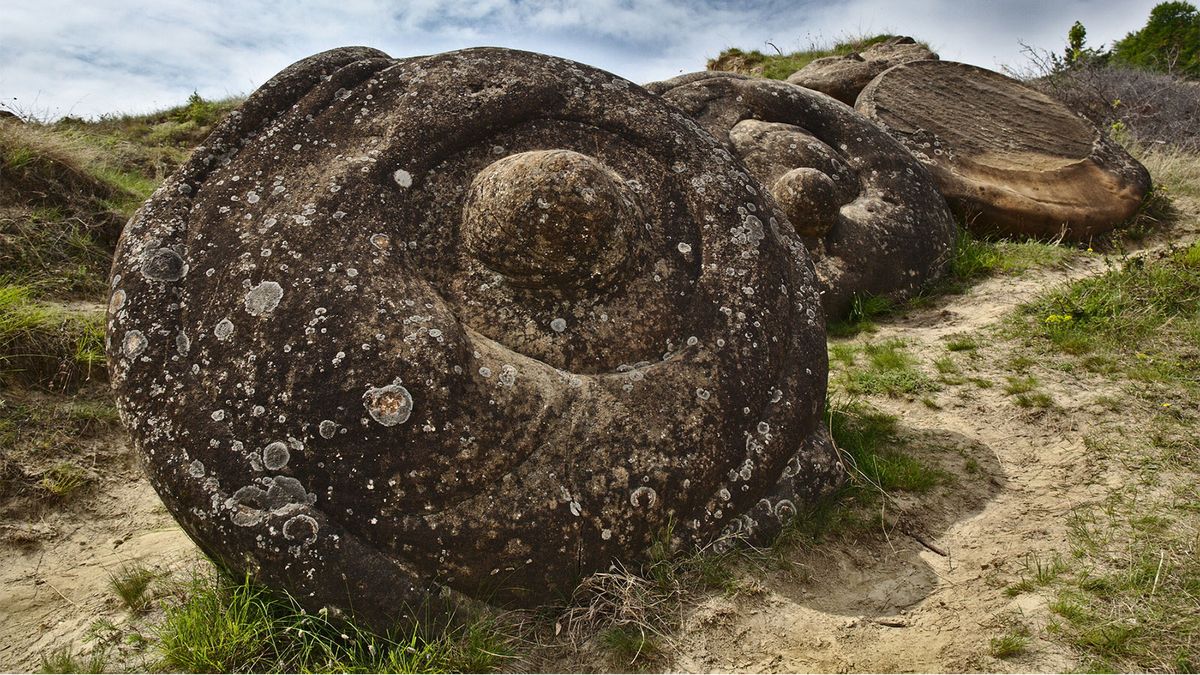 Just when we think we’ve seen it all, Mother Nature throws yet another oddity our way. Welcome to the wondrous world of the geological manifestations known as trovants. These rare bulbous, budging boulders are only found in a small town in Romania called Costesti. So fantastical are these trovants, they’ve found a place in local folklore. Some say they grow, walk and even give birth to baby trovants. Science says they’re probably right.

Trovants are spherical and slightly irregular-shaped rocks. They can be as small as less than an inch, or a couple of millimeters, in diameter and weigh only a few grams, or they can soar up to 15 feet (4.5 meters) high and weigh several tons. These odd, gravity-defying boulders have baffled observers since the 18th century with many a curious soul suspecting they were dinosaur eggs, plant fossils or even alien pods.

Scientists believed trovants to be a type of concretion — a mound of mineral matter (specifically gritstone and conglomerates) embedded within rock layers of limestone, sandstone or shale. They often form from minerals precipitating, or settling, out of water collected around a nucleus of pebble, leaf, shell, bone or fossil.

READ MORE:  Ensuring the voice of physics is heard loud and clear

However, in 2008, the International Geological Congress in Oslo claimed trovants were incorrectly classified as concretions because there was no mineral difference between the stones and the sandstone beds on which they sat. There was also no distinct nucleus inside them.

Whatever they are, scientists believe that based on their makeup and locale atop the sands, these weird stones are older than man — shaped by earthquakes around 5.3 million years ago, during the Middle Miocene sub-epoch. The surrounding sands also suggest the area was an ancient marine environment, which may explain why bivalve and gastropod fossils can sometimes be found in them.

These Rocks Can Grow and Multiply

Another oddity about trovants — they secrete cement. This talent makes some people think they may be living creatures and not simply rocks. This cement seepage occurs after a heavy rain shower. When trovants absorb the rain’s minerals, the minerals come in contact with the chemicals already present in the stone, causing a pressure reaction that makes the rocks grow in girth. It’s not something you can see happening. Researchers say the deposition rate for trovants is roughly 1.5 to 2 inches (4 to 5 centimeters) every 1,000 years.

This same phenomenon is what causes trovants multiply or “reproduce,” as some might say. When a new growth bauble emerges, likely from water affecting only one side of the rock, and gets big enough, it can break off from the “parent” rock and create baby trovants.

Some people also believe that trovants can “walk,” much like the so-called sailing stones of Death Valley that appear to drift across the flat desert landscape on their own. One researcher allegedly filmed trovants for two weeks and claimed one moved about one-tenth of an inch (2.5 millimeters). While many academics are skeptical about “trovant walking” claims, they don’t deny the possibility that the heating or cooling of the soil could cause movement among the stones.

Where Can I See a Trovant?

Trovants are almost exclusively found in Romania’s Valcea County at the sand quarry near the Costesti village, along the Gresarea Brook, or in the neighboring Otesani village. To protect these unusual geological specimens, the “Muzeul Trovantilor” or Trovants Museum Natural Reserve, was developed in Valcea County, Romania, in 2004, and is now protected by UNESCO.