Uranium has the highest atomic number of any naturally occurring element and was, for a long time, placed at the end of the periodic classification of element. Trans-uranic elements have, however, now been prepared by nuclear reactions. 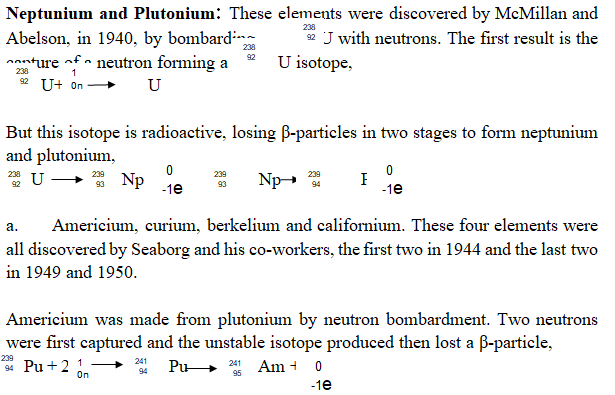 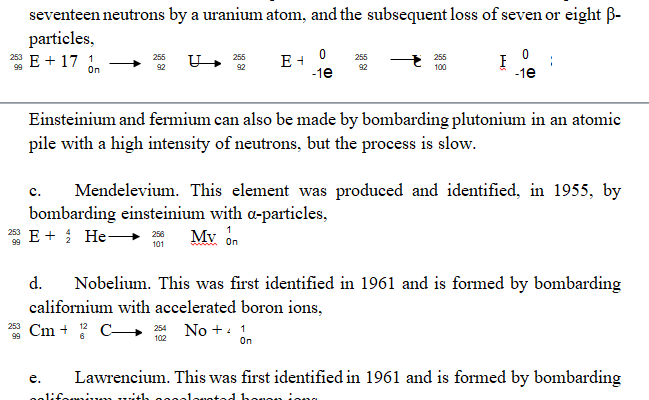 Nuclear Stability: An atomic nucleus is made up of a number of protons equal to its atomic number, plus a sufficient number of neutrons to give the necessary mass number. The protons and neutrons in a nucleus are called nucleons.

Because the nucleus of an isotope must contain a whole number of protons and neutrons it was, for a while, thought that isotopic masses, i.e. the relative atomic masses of isotopes, might all be whole numbers. This revived a hypothesis first suggested by Prout, in 1815, in which he supposed that every atom was made up of hydrogen atoms.

Careful measurement, by mass spectrographic methods, show, however, that relative isotopic masses, on the 12C scale, are not exactly whole numbers. Some illustrative figures are given below

For an isotope, the nearest whole number to its  is known as the mass number. The slight difference between the actual relative isotopic mass and the mass number, known as the mass defect, is due to the fact that the masses of protons and neutron in a nucleus are not strictly additive because some part of their mass is converted into energy. This energy is the binding energy which holds the nucleus together; the greater it is, the more stable will the nucleus be.

In general, for a nucleus containing Z protons, and with a mass number of A, the number of neutrons will be (A-Z). If the mass of the proton is p, that of the neutron n, and that of the actual nucleus M, the mass converted into energy will be given by

And this can be converted into energy units as explained below.

Note on units. When mass is converted into energy, the two are related by the equation

One electron volt (1 eV), which is the energy acquired or lost by a particle of unit electronic charge on passing through a potential difference of 1 volt, is equal to 1.602 x 10-19         joule, so that

The figures given here are only approximate to show the relationship between the various units.