You Are Here: Home » Concise Description of Total Radiation Pyrometers 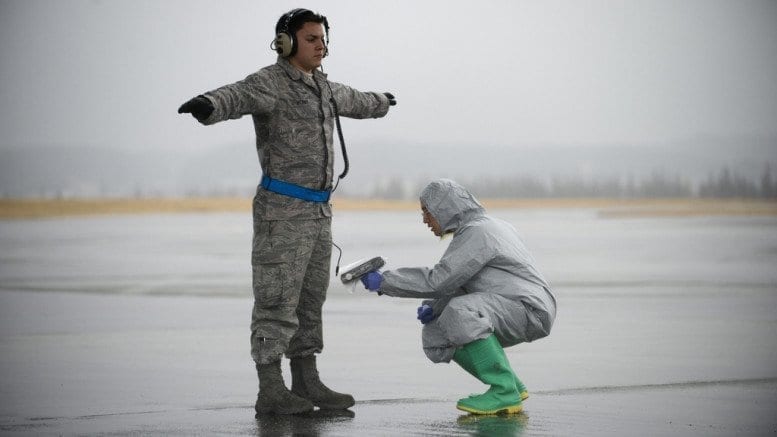 Note: In this describing these Total radiation Pyrometers, we shall use letters to represent the apparatus for just for convenience and simplicity.

The Fery Total Radiation Pyrometer consists of a blackened tube A which is open at one end B; at the other end C it carries an eye-piece E. D is a thermocouple attached to a small blackened disc of copper, which faces the end C of the tube and is shielded from direct radiation. M is a gold-plated mirror, pierced at the centre to allow light to reach the eye-piece, and moveable by a rack and pinion P.

In use, the eye-piece is first focused upon the disc D. The mirror M is then adjusted until the furnace is also focused upon D. since a body which is black or nearly so shows no detail, focusing it upon D by simply looking at the image would be almost impossible. To make the focusing easier, two small plane mirrors m’, m are fitted in front of D. They are inclined with their normals at about 5o to the axis of the tube, and are pierced with semi-circular holes to allow radiation from M to reach the disc. The diameter of the resulting circular hole is less than that of the disc. When the source of heat is not focused on the disc, the two mirrors appear out of focus and when the focusing is correct; the two mirrors then appear in focus. The source of heat must be such a size that its image completely fills the hole.

READ MORE:  Classification and Production of Spectra through Excitation

The radiation from the source warms the junction and sets up an electromotive force. A galvanometer G connected to the junction is then deflected, and can be calibrated to read directly the temperature of the source.

The Foster Pyrometer is another type of Total Radiation pyrometer. It also uses a thermojunction with blackened disc. A is an open diaphragm, so placed that it and the thermojunction D are at conjugate foci of the mirror M. The thermojuction then collects all the radiation entering through A but, since it is much smaller than A, it is raised to a higher temperature than if its disc were the size of A. The radiation entering through A is limited to that within the cone ABC; as long as the cone is intersected by the hot source, the amount of radiation reaching the thermocouple is independent of the distance to the source.

Be the first to commenton "Concise Description of Total Radiation Pyrometers"