Daily, we look to the sky in awe as planes fly above us, moving either goods or individuals from one location to another but, we have paid little or no attention to what power most of these planes – Jet Engines which are also called gas turbines.

Let’s take a look at what these machines are, how they work and what differentiates them from car engines.

What is a Jet Engine?
A jet engine is a machine that changes liquid fuel into a force called thrust.
A thrust is a force that pushes the plane forward by forcing a high volume of air into the spinning blades, creating an upward force that lifts the plane into the sky.

A Brief History Of Jet Engines After Sir Isaac Newton created a theory from his third law of motion which suggested that, a channeled blast of hot air backwards through the nozzle could make the plane move forward and at a high speed, there have been numerous inventions from different scholars with the sole aim of creating an engine which could fly a plane.

Henrl Giffard became the first person to build an airship that was powered by a three-horse power steam engine, which was the first aircraft engine. Unfortunately, it was too heavy to fly.

Felix de Temple built a monoplane in 1874 which flew for could only fly down a hill all thanks to its coal-fired steam engine.

Hiram Maxim tried to fly his biplane with two coal-fired steam engines in 1894, but unfortunately, it flew for only a few seconds because of its weight.

French Scientist Rene Lorin invented the ramjet which is regarded as the simplest jet engine in 1908.

Meanwhile, 21-year old Frank Whittle designed the first turbojet engine which was made up of a combustion chamber, a multistage compressor, a nozzle and a single-stage turbine, in 1930.
He officially filed for a patented 1937, which was granted in 1939.
Although Whittle successfully flew his engine in 1941, it was his German rival, Hans Van Ohain’s Germain Heinkel He-178 airplane that was officially the first airplane to successfully use a gas turbine engine on August 27 1939 because he was working on a similar project at the same time as Whittle.

How Does A Jet Engines Work? 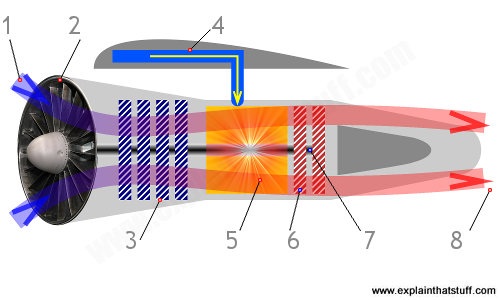 All jet engine operates on the same principle which is based on Isaac Newton’s law of momentum which states that ” for every action, there is an equal and opposite reaction”.

READ MORE:  Tesla’s robot is a real robot now, not just a guy in a suit

The engine pulls cold air in through its fan and forces its through its passage, slowing it down by 60% in the process.
When the air gets in, the compressor increases the air’s pressure eight times more, which automatically increases its temperature.

Liquid fuel is then sprayed from the fuel’s tank into the engine.
Meanwhile, in the combustion chamber, the fuel mixes with the compressed air and burns to a temperature of about 900 degrees Celsius, releasing heat energy and drastically increasing the temperature level.
The burning gases then leave the engine through the nozzle twice the speed of the cold air which entered through the fan at first, and that is how the plane is powered.

From their components to their applications, there are certain factors that differentiate jet engines from each other, even though they work similarly and have certain parts in common.

Types of Jet Engine include: 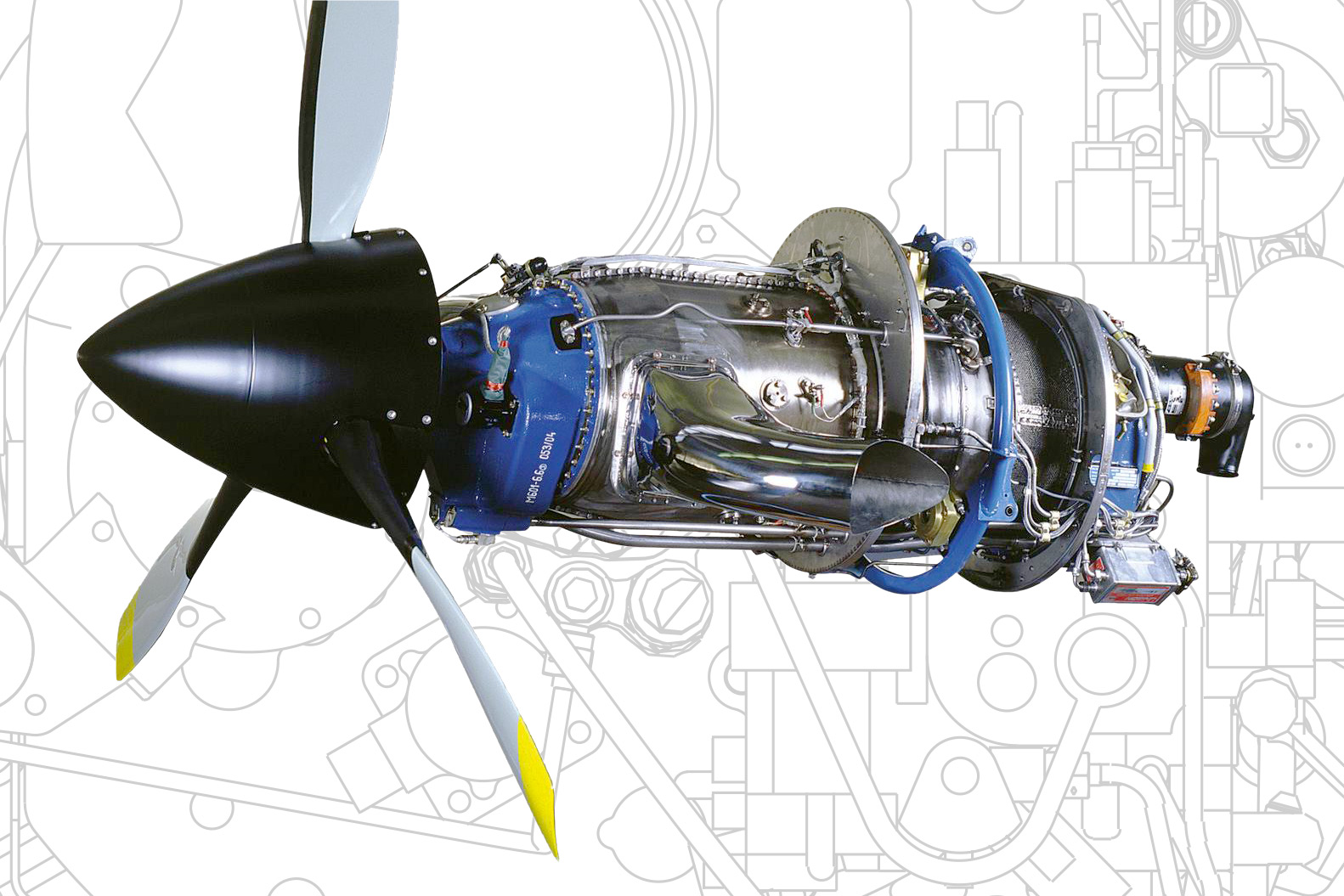 A turboprop engine is a type of jet engine that is attached to a propeller from which most of its thrust comes.
The hot gas and air pressures in this engine are used to spin the turbine which in turn generates power to drive the propeller and push the plane forward.

Nowadays, turboprop engines are made with propellers that have a large number of scimitar-shaped blades and leading edges for the accommodation of higher flight speeds, stabilization of the aircraft at altitude, and a smaller propeller diameter.
Its propulsion efficiency of below 500miles/hr flight speed has been rated as a better option compared to a turbojet engine.

Turboprop engines are best used for powering modern cargo planes and small aircraft because of their low consumption of energy while fighting air resistance which is fostered by their slow flight movement. 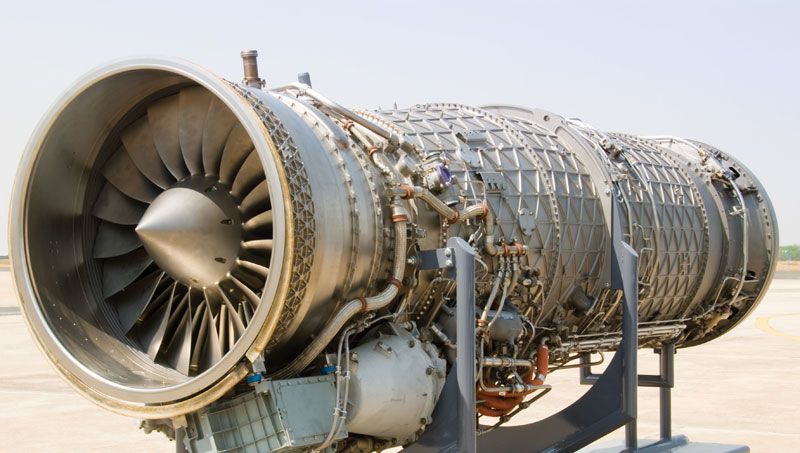 The turbojet engine is a reaction engine that sucks air in from an inlet in its front, compresses it to a range of 3 to 12 times its original pressure, burns it in a combustion chamber in addition to fuel and raises its temperature.

The resulting gases then flow through the turbine, causing it to spin and send out an amount of pressure to the nozzle which produces a thrust that moves the plane forward.

Advantages Of Using A Jet Engine 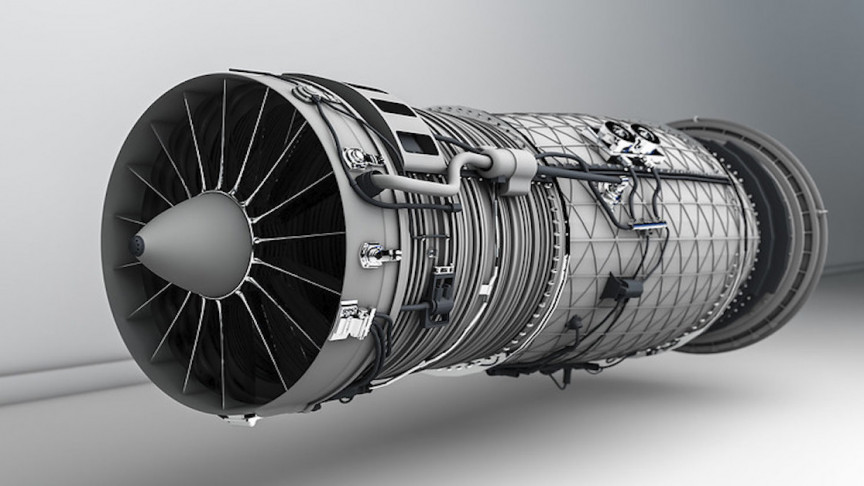 1. It has no reciprocating part which makes it free from unbalanced forces.

Disadvantages Of Using A Jet Engine

1. It creates a noisy environment.

3. Difficulty in the operation of its propellant unit.

4. Its materials are very expensive.

5. Its compression-pressure ratio changes with speed.