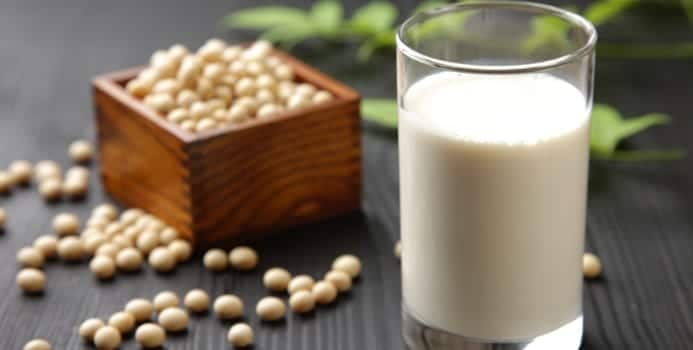 Soymilk production is an important agricultural processing activity that leverages on the economic and agricultural advantages and value chain of soybean as an important nutritional crop that provides the much needed and essential protein and amino acids to individuals of diverse segments of the society.

Other minerals found in soymilk include selenium, iron and fluoride. Phytosterols, ash and oligossacharide sugars such as stachyose and raffinose are also found in soymilk. Also worthy of note is that soymilk contains isoflavones such as glycitein, genistein and daidzein. Genistein is involved in the prevention of certain cancers such as cancer of the colon.

Soybean which is used in soymilk production has become an important agricultural resource due to the fact that it has contributed significantly in the economic fortunes of farmers that grow it and in every other individual involved in the the processing of this novel leguminous crop right from the farm through the processing stages of soymilk and down to the final consumer via marketing, promotion and sales.

From a soybean farm right through to the final consumer who buys the soymilk product, there is value been created, employment been generated and a nutritional problem been solved especially when lactose intolerant individuals, diabetic patients and nursing mums, consume soymilk.

The production or processing of soymilk is a major industrial process in the food and beverage industry. Since the demand for a nutritional alternative to the regular animal milk protein source is increasing, many individuals now turn to soymilk because of its numerous nutritional advantages such as its component nutritional constituents and the fact that it lacks cholesterol and lactose both of which are nutritionally disadvantageous to diabetic patients and to lactose intolerant individuals.

Economically, production of milk from soybean  is a lucrative activity especially if it is processed under standardized conditions with a prolonged shelf-life. Interestingly, many companies and industrial outlets involved in beverage production now produce soymilk to meet the growing demand for this nutritionally viable product and at the same time, creating the much needed jobs for young persons who work in this agricultural value chain.

Malnutrition is a major problem among growing children especially in developing countries. The lack of adequate nutrition leads to several preventable disease conditions such as kwashiokor, marasmus, stunted growth, poor learning ability and stunted growth among young children. Soymilk, being an important plant protein source, that is cheap and available from local farmers can be used effectively to combat malnutrition among vulnerable children.

The numerous component nutrients in this milk as enumerated in the first paragraph of this text are all that is needed to combat a child’s nutritional deficiencies, serve as a healthy alternative to animal milk protein for diabetics and lactose intolerant individuals.

In Africa, Asia and parts of South America where there are significant nutritional challenges, soymilk can be used effectively in combating child malnutrition through the massive deployment of the milk product especially in refugee camps where there are displaced persons lacking food and water.

Soymilk production is a scientific process that is often regulated by food agencies of government to ensure that they meet specified nutritional standards and microbial quality. To this end, soymilk can be fortified with additional nutrients that can meet specific nutritional needs of individuals who consume them.

The report further showed that there was a 2.4% increase in High Density Lipoprotein (HDL). HDL is the ‘good’ cholesterol that is released by soymilk to the body. This report further indicates that there was an 18 – 28% chance of a reduction in coronary heart disease by HDL. It can be vividly inferred that this milk and its protein constituents has the capacity of lowering Low Density Lipoprotein (LDL) levels in the body. Moreover, the unsaturated fatty acids in soymilk is also responsible for a reduction in total serum cholesterol levels according to the published report.

The phytochemicals present in soybean are the important components that makes this product novel to fight malnutrition. Soymilk contain about 8% linolenic acid, which is an omega 3 fatty acid and linoleic which is a polyunsaturated fatty acid. These fatty acids have been linked to reductions in cancer cells and heart diseases.

The isoflavones present in the milk are the active components that can fight cancer in the human body. The similarity in structure between isoflavones and estrogen makes the former bind to receptors in cells which normally would have been bound by the latter and causing cancer. By binding to the receptors in place of estrogen, isoflavones found in soybean and the milk occuring as phytoestrogen then acts as an anti-estrogen thereby preventing cancerous growth among cells. It may also interest you to note that genistein has been shown to inhibit cell growth and multiplication and inhibit angiogenesis known as new tumor growth especially in the prostate among men.

Bone density and strength can be built by the consumption of soymilk which helps in the fight against osteoporosis. It has been shown from studies that protein from animal sources helps in the leaching of calcium out of the bone and then excreted through feces and urine. However, isoflavone genistein present in  this milk helps in the inhibition of bone breakdown and increases bone density. Sources of calcium from soybean include:- tofu, soymilk, soyflour and whole soybean

Symptoms and Treatment of Bowel Cancer

Calcium and its Significance in Industrial Processes