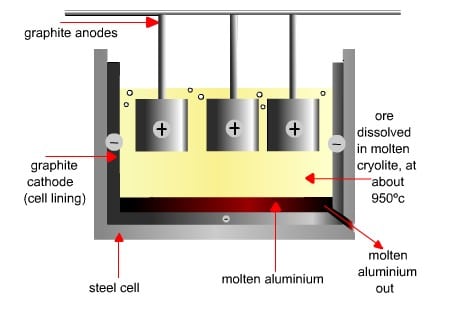 The Hall–Héroult process is one of the major industrial processes for smelting aluminium. It involves the dissolving of aluminium oxide (alumina) (gotten often from bauxite, aluminium’s chief ore, through the Bayer process) in molten cryolite, and electrolyzing the molten salt bath in a purpose-built cell. Hall–Héroult process applied at industrial scale happens between 940–980 °C and produces 99.5–99.8% pure aluminium.

Recycled aluminum does not require electrolysis, thus it does not end up in this process. Hall-Heroult Process contributes to climate change through the emission of carbon dioxide and fluorocarbons in the electrolytic reaction and consumption of large amounts of electrical energy.

In Hall-Heroults process, CaF2 or Na3AlF6 is mixed with pure Al2O3. This results in the lowering of melting point of the mixture and also the  increase in its ability to conduct electricity.  A steel vessel with a lining of carbon and graphite rods is used in this process.

The carbon lining on the steel vessel acts as a cathode and the graphite act as an anode. Oxygen is formed at the anode when electricity is passed through the electrolytic cell which consists of carbon electrodes. Carbon monoxide is formed when the oxygen formed reacts with the carbon of the anode. In this aluminum production method, for every 1 kg of Al produced, approximately 0.5 Kg of carbon anode is burnt. 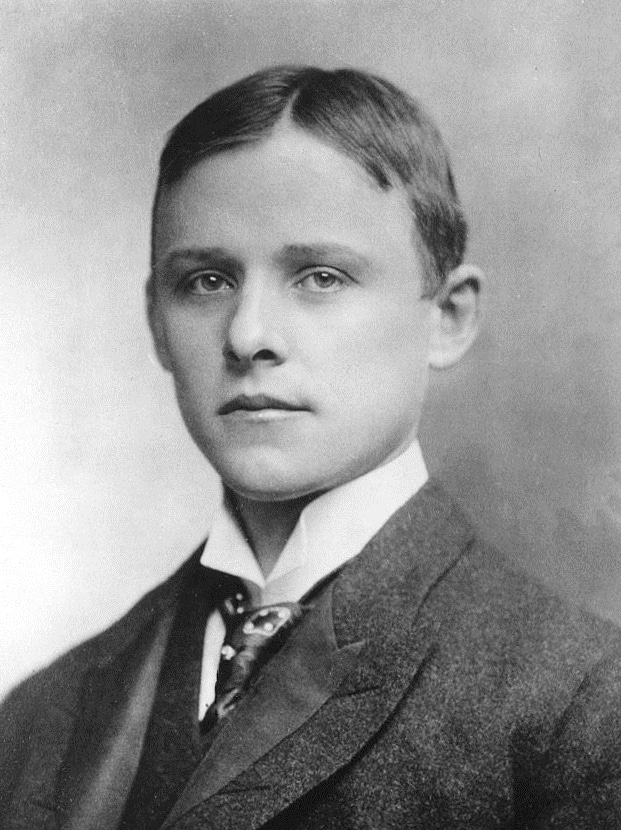 Charles Martin Hall succeeded in producing aluminum metal by passing an electric current through a solution of aluminum oxide in molten cryolite on the 23rd of  February 1886, in his woodshed laboratory at the family home on East College Street.

Aluminum was a semi precious metal before Hall’s discovery of its economical value gotten from its ore. Hall’s invention, brought aluminum oxide into commercial-scale production by the Pittsburgh Reduction Company (now known as Alcoa), made this light, lustrous and non-rusting metal available and also the basis of the aluminum industry in North America.

Electrolysis is defined as the process by which electric current is passed through a substance to effect a chemical change.

Aluminum (Al) is a chemical element, a lightweight silvery white metal of main Group 13 (IIIa, or boron group) of the periodic table. 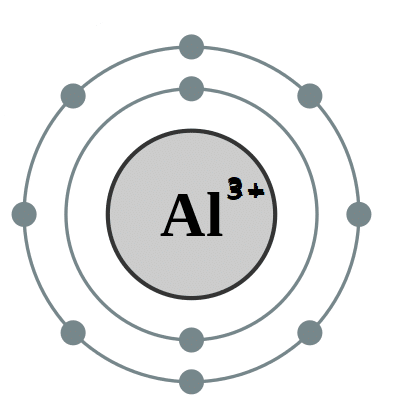 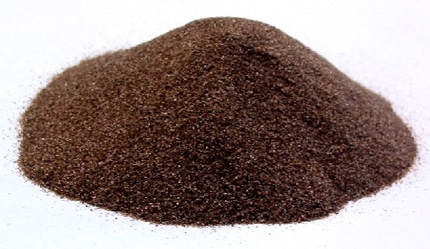 Electrolysis of Aluminum Oxides Via The Hall-Heroult Process

Aluminium ions are produced at the adverse cathode from aluminium oxide and then sank down because they are heavier than the cryolite solution. The liquid shape of the aluminium then sinks to the bottom. On the other side, at the positive anode, oxygen from the aluminium oxide forms and responds to carbon dioxide CO2 with the graphite carbon.

The overall reaction for this process is:

Here are the electrolytic reactions:

Aluminum ions that are positively charged gain electrons from the cathode and form molten aluminium during the process of electrolysis. Oxygen is formed at the anode by oxide ions that lose electrons.

What is the overall reaction gotten from the Hall-Héroult process?

The Hall-Heroult process is a type of extraction process widely used in the extraction of aluminium. In the Hall-Heroults process, a pure [Al2O3] is mixed with [CaF2] or [Na3AlF6]. This results in the lowering of the mixture’s  melting point and increases its ability to conduct electricity. This process uses a steel vessel with a lining of carbon and graphite rods.

What reaction is part of Hall’s process?

Electrolysis. In the Hall-Heroult’s process, the alumina obtained through the refining of the bauxite is mixed with cryolite and subjected to electrolysis.

What are the 3 main ores of Aluminium?

The ores of aluminium are as follows:

What  metal is produced by the Hall-Héroult process?

Charles Martin Hall was a resourceful experimentalist, who not only devised a method of making aluminum metal, but also made most of his apparatus and prepared many of his chemicals.

Is the Hall-Héroult process used for copper extraction?

No.  The Hall-Heroult process is used for the extraction of Aluminium only.

Is the Hall-Heroult Process a leaching process?

Yes, because in the Hall’s process the powdered ore is leached by heating it with sodium carbonate to form sodium aluminate.