You Are Here: Home » The Food Chain and the Sun as Its Ultimate Energy Source 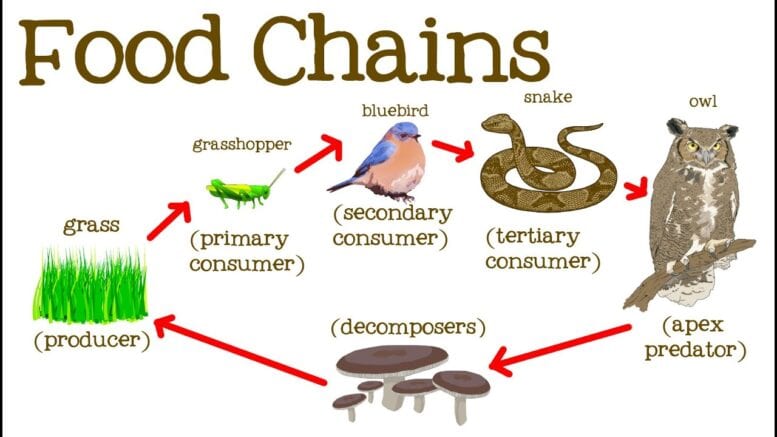 What is the Food Chain All about? All animals derive their food either directly or indirectly from plants. Carnivorous animals feed on other animals which themselves feed on smaller animals but sooner or later in such a series we come to an animal which feeds on vegetation. For example, pike eat perch, perch eat sticklebacks which feed on water fleas; the water fleas feed on microscopic plants in the pond.

This kind of relationship is called a “food chain”. The basis of food chains on land is vegetation in general, but particularly grass and other leaves. In water, the basis is the “plankton”- the millions of microscopic plants living near the surface of the sea, ponds and lakes. These need only the water round them, the dissolved carbon dioxide and salts and sunlight to make all their vital substances. 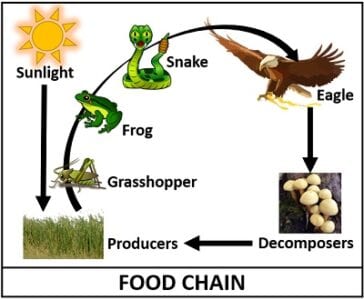 Feeding on these microscopic plants are tiny animals such as warerfleas and other crustacea and the larva of many kinds of animal. The plankton is the pasture of the sea, and collection and estimation of the density of plankton gives useful indications of where herring and other fishes are likely to be abundant later on, since they feed on crustaceans that feed on the planktonic plants. At the base of a food chain there are usually numerous small plants while at the “top” are a few large animals.

If the population of one of the animals or plants in a food chain is altered, all the others are affected. If pike and perch are removed from a pond, the sticklebacks will increase for a time at the expense of the water fleas. If diatoms in marine plankton flourish, herrings may become plentiful as a result of the increase in the crustaceans that eat the diatoms.

All the energy released on the earth released on the earth, apart from atomic energy and tidal power, comes from the sun, via food oxidized in animals and plants, coal from fossilized forests, petroleum from marine deposits, or hydroelectric power from rain-water in lakes. There are ways of using the sun’s energy directly and making it heat water to produce steam, but at the moment, one of the best ways of trapping sunlight is to grow trees and other plants from which food and other energy-rich products can be collected.

Without food chain, many species would go into extinction, thus food chain is very important for the survival of many species. When only one element is removed from the food chain it cause the extinction of a species in some cases. Primary producers are the foundation of all food chains. Autotrophs, make use of the energy gotten from either sunlight or inorganic chemical compounds in creating complex organic compounds, species at higher tropic levels cannot produce their food, so they must consume the producers. Most life of producers would not be in existence without the sun, the sun makes photosynthesis take place. Chemotrophs gain all their metabolic energy from chemosynthesis driven by hydrothermal vents.