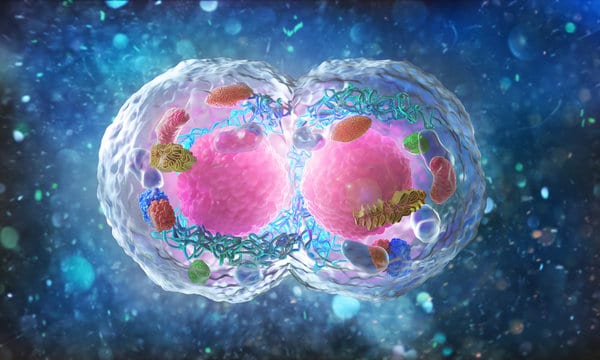 Every day, every hour, and every second, one of life’s most important events occurs in your body, that important event is called the cell division. Cell division results in the formation of new daughter cells. A single cell divides to form two cells, which then divide to form four cells, and so on. Because new cells are formed when old cells divide, we call this process “cell division” and “cell reproduction.” Cells’ ability to divide is unique among living organisms.

Cells divide to produce more cells, which then causes an organisms to grow. Every day, nearly two trillion cells divide in the human body.

How Many Cells Are There in Your Body?

You started out as a single cell, or what you might call an egg. You will have trillions of cells by the time you reach adulthood. The number of cells present in the body varies depending on the size of the person, but biologists estimate it to be around 37 trillion cells.

How do Cells Know When to Divide?

The cell that is dividing is referred to as the “parent” cell in cell division. The mother or parent cell splits into two “daughter” cells. The process is then repeated in what is known as the cell cycle.

Cells communicate with one another by sending chemical signals through special proteins called cyclins. These signals function as switches, telling cells when to divide and when to stop dividing. Cell division is necessary for growth and the healing of wounds. Cells must also stop dividing at the appropriate time. When a cell is unable to stop dividing as it is supposed to, it can develop cancer.

Cells divide in two ways, depending on the type of cell, these divisions are known as

Each of the cell division methods has distinct characteristics. One of the major differences in mitosis is that a single cell usually divides into two daughter cells with the same number of chromosomes. The cell division of this type is beneficial for basic growth, repair, and maintenance.

Mitosis is the process by which somatic also known as non-reproductive cells divide. The somatic cells make up the majority of the tissues and organs in your body, including skin, muscles, lungs, gut, and hair cells.

Mitosis creates no genetic diversity in normal healthy cells because the daughter cells have exact copies of their parent cell’s DNA.

The Cell Cycle of Mitosis

The “Interphase” period occurs before a cell begins to divide. Cells appear to be constantly dividing,  but each cell actually spends most of its time in the interphase. Interphase is the time in the cell cycle when a cell prepares to divide. Cells are gathering nutrients and energy at this time. The parent cell is also replicating its DNA to be shared equally by the two daughter cells.

The mitosis cell cycle has several phases that result in the formation of two new diploid daughter cells.

Some organelles divide between the two daughter cells when a cell divides during mitosis. For example, because mitochondria can grow and divide during the interphase, the daughter cells each have enough mitochondria. The Golgi apparatus, on the other hand, disassembles before mitosis and reassembles in each of the new daughter cells. Many details about what happens to organelles before, during, and after cell division are being studied right now.

Meiosis is the other major method by which cells divide. Meiosis is the process by which sex cells, such as the female egg cells or the male sperm cells, are formed.

Each new cell in meiosis contains a unique set of genetic information.

Following the process of meiosis, sperm and egg cells can fuse to form a new organism.

Meiosis is responsible for the genetic diversity (genetic difference) found in sexual reproducing organisms. During the process of meiosis, a small portion of each chromosome separates and reattaches to another. This is known as “crossing over” or “genetic recombination.” Full siblings made from the same two parents’ egg and sperm cells can look very different from one another due to genetic recombination.

Meiosis produces four haploid daughter cells, each with unique genetic information from the parent cell and each other.

The Cell Cycle of Meiosis

The meiosis cell cycle is divided into two stages:

Meiosis I reduces the number of chromosomes and occurs when crossing over occurs.

Meiosis II reduces the total amount of genetic information present in each cell’s chromosome by half. The result is four daughter cells known as haploid cells. Haploid cells have just one set of chromosomes, which is usually half the number of chromosomes found in the parent cell.

The cell goes through an interphase before meiosis begins. The parent cell, like mitosis, uses this time to prepare for cell division by gathering nutrients and energy and replicating its DNA. The DNA will be switched around during genetic recombination and further divided between four haploid cells during the next stages of meiosis.