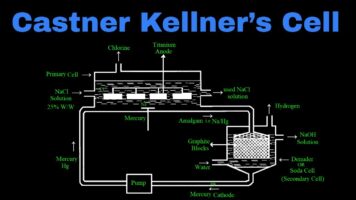 The Castner-Kellner process, invented in the 1890s by American Hamilton Castner and Austrian Carl Kellner, is a method of electrolysis on an aqueous alkali chloride solution (usually sodium chloride solution) to produce the corresponding alkali hydroxide.

Charles Watt received the first patent for electrolyzing brine in England in 1851. However, his method was not economically viable for producing sodium hydroxide because it could not prevent the chlorine formed in the brine solution from reacting with its other constituents. Hamilton Castner, an American chemist and engineer, invented the mercury cell, which solved the mixing problem and was granted a U.S. patent in 1894. Carl Kellner, an Austrian chemist, arrived at a similar solution around the same time. To avoid a legal battle, they formed a partnership in 1895 and established the Castner-Kellner Alkali Company, which built plants using the process throughout Europe.The mercury cell process is still in use today. Current mercury cell plant operations are being chastised for mercury pollution in the environment, which has resulted in severe mercury poisoning in some cases (as occurred in Japan). Mercury cell plants are being phased out as a result of these concerns, and an ongoing effort is being made to reduce mercury emissions from existing plants.

Procedure of the Castner Keller Process 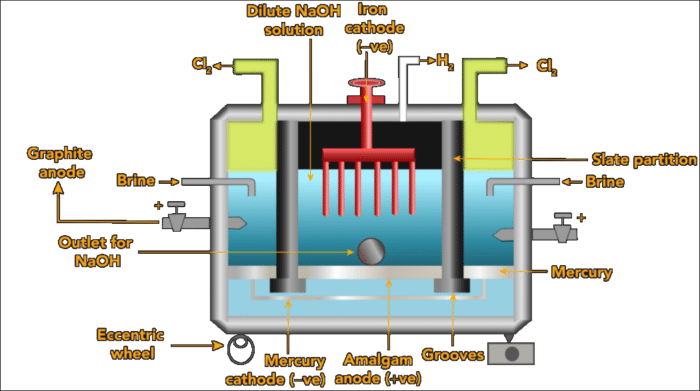 The apparatus depicted is divided into two types of cells, which are separated by slate walls. The first type, shown on the right and left of the diagram, employs a sodium chloride solution electrolyte, a graphite anode (A), and a mercury cathode (B) (M). The other type of cell, depicted in the center of the diagram, employs a sodium hydroxide electrolyte and a mercury anode (M), as well as an iron cathode (D). The mercury electrode is shared by both cells. This is accomplished by lowering the walls separating the cells below the electrolyte level while still allowing the mercury to flow beneath them.

The reaction at anode (A) is as follows:

As a byproduct of the process, the chlorine gas vents at the top of the outside cells and is collected. In the outer cells, the reaction at the mercury cathode is

The anode reaction occurs at the interface between the mercury and the sodium hydroxide solution in the center cell.

The net result is a decrease in the concentration of sodium chloride in the outer cells and an increase in the concentration of sodium hydroxide in the center cell. As the process continues, some sodium hydroxide solution is withdrawn as an output product from the center cell and replaced with water. To replace what has been electrolyzed, sodium chloride is added to the outside cells.

Which one is used in a Castner-Kellner cell’s outer chamber?

Answer: In this process, mercury cathode and graphite anode are used to produce caustic soda.

Is caustic soda made using the Castner Kellner method?

Sodium hydroxide can be produced using a variety of methods, including the Castner-Kellner process.

How does the Castner Kellner process produce Naoh?

Answer: Sodium hydroxide is commercially produced by electrolysis of sodium chloride in a Castner-Kellner cell. Using a mercury cathode and a carbon anode, a brine solution is electrolyzed. Sodium amalgam is formed when sodium metal discharged at the cathode combines with mercury.