In most mammals, the teeth are of different kinds, a condition described as heterodont in contrast with the homodont teeth of reptiles and amphibians. There are incisors, which are sharp-edged biting teeth in the front of the jaw, canines, which are pointed teeth used for tearing, piercing or killing, premolars and molars, which are chewing teeth. The teeth are replaced once, so that there are two successive sets, milk teeth and permanent teeth. This is the dishyodont condition compared with the polyphyodont condition where the teeth are replaced many times. There are no molars in the milk teeth.

It is customary to express the numbers and kinds of teeth by a formula which makes it easier to remember them. Half the upper jaw is taken above the line and half the lower jaw below it; i=incisors, c= canines, p= premolars, m = molars. The typical dental formula is found in the pig and a few other mammals.

When the significance of the various symbols is understood, it is sufficient to learn only the figure in brackets. A few examples, for comparison with the typical complete state are____ 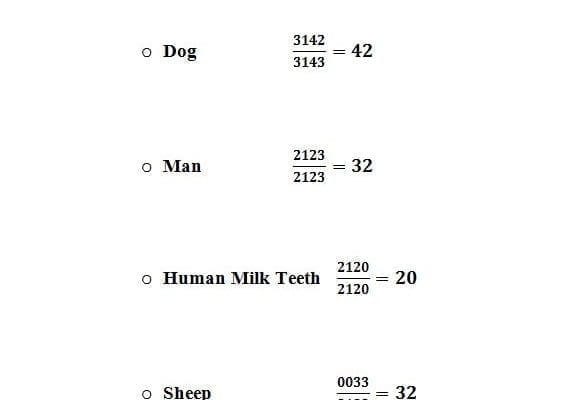 The portion of a tooth which projects above the gum is the crown, and the part embedded in a socket in the jaw-bone is the root. The  narrow region between the two is the neck. Enamel is the hardest substance in the body and forms a covering to the exposed portion of the tooth. It is made of small hexagonal prisms about 5µm in diameter set at right angles to the surface of the crown. The material composing them is mainly calcium phosphate with a small proportion of calcium carbonate. Cement is like bone in structure but it lacks Haversian canals within the enamel and cement, and constituting the main substance of the tooth, is yellowish dentine or ivory. It is harder than bone but contains no Haversian canals, lacunae or cells. There are countless fine canaliculi passing into it from pulp cavity. In life, these canaliculi are occupied by fine protoplasmic fibrils connected to odontoblasts lining the pulp cavity. The cavity is occupied by jelly-like connective tissue containing blood-vessels, lymph channels and nerve fibres, all of which pass through the pulp canal at the base. The tooth is set in an alveolus of the jaw-bone, surrounded by the dental periosteum which is a somewhat thickened continuation of the periosteum pass into both the cement and the jaw-bone and thus fix the tooth firmly in its socket.

During development, a denta groove is formed along the surface of the gum, the groove being due to downward extension of the epidermis with the stratum germinativum leading. The downgrowth is known as the dental lamina and soon it forks into an outer branch from which the milk tooth will develop and an inner branch where the permanent tooth will form. The outer branch is invaginated from below to contain a mesodental papilla  of connective tissue in which cells accumulate.

These cells secrete the dentine, while the enamel organ secretes the enamel. Gradually the tooth grows until it break the surface, the enamel organ now forming a thin membrane which is soon worn off. The developing bone forms around it and secretes the cement and thus by growth of both bone and tooth, secure fixation is accomplished.

From the other fork of the dental lamina, the permanent tooth develops and gradually pushes the milk tooth out, the process being assisted by osteoclasts which erode the root of the milk tooth.

When the permanent tooth is in position, its root grow down to form a pointed fang, or several fangs in the case of premolar and molar teeth. This growth of the fang almost closes the pulp canal so that the entry of blood is severely restricted. The tooth remain alive, but growth ceases.