In studying the structure of nucleic acids, we must understand that there are two principal types of nucleic acid are found in cells deoxyribo nucleic acid (DNA), and ribonucleic acid (RNA).  By means of chemical tests it has been shown that DNA is mainly confined to the nucleus, whereas RNA is found mainly, but not exclusively, in the cytoplasm. Like proteins, nucleic acids are long chain molecules, but the chains are much longer than those of proteins and the sub-units more complicated than those amino acids.

The building block of a nucleic acid are called nucleotides which are themselves complex molecules. A nucleotide consists of three molecules linked together: a 5-carbon sugar (pentose), an organic base, and phosphoric acid. Let us consider these three constituents in turn.

First, the sugar. You will recall that a hexose sugar such as glucose consists of a six-member ring of five carbon atoms and one oxygen atom to which various side groups are attached. A pentose sugar is basically similar except that there is one less carbon atom in the ring with the result that the molecule is constructed as follows:

This particular sugar is ribose.  Deoxyribose differs from it only in that the hydroxyl side group at position 2 is replaced by a hydrogen atom. In other words deoxyribose has one less oxygen atom than ribose:

The second constituent of a nucleotide is phosphoric acid (H3PO1) which has the structural formula:

The third component is the organic base. This can be any one of five: adenine, guanine, thymine, cytosine or uracil, which we will abbreviate to A, G, T, C and U respectively. All these are complex ring compounds, the rings being composed of carbon and nitrogen atoms which for simplicity we will represent thus:

Do not worry about their detailed structure for the moment, but notice the hydrogen atom projecting from the nitrogen on the left: this plays an important part in the building up of a nucleotide. 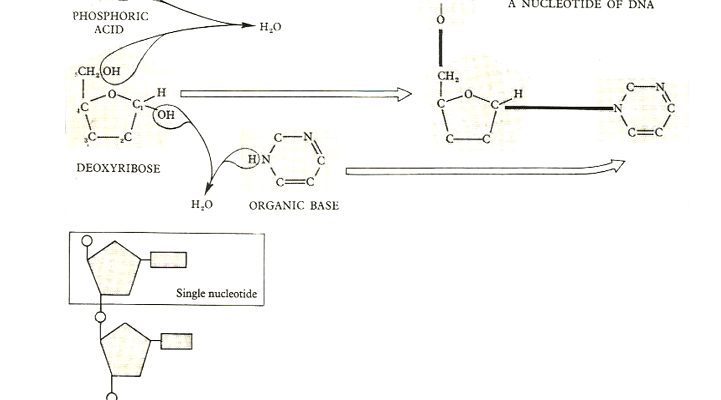 How do the three components link up to form a nucleotide? As in the construction of other compounds the process is one of condensation involving the removal of water. A sugar ring attaches itself to a phosphoric acid molecule at position 5, and to one of the five bases at position 1. Two molecules of water are removed in the process.

The nucleotides are then strung together to form a nucleic acid molecule. This involves condensation. The elements of water are removed from the sugar of one nucleotide and the phosphate radical of another, thereby forming a dinucleotide.  The addition of further nucleotides produces a long polynucleotide chain whose backbone consists of alternating sugar and phosphate groups with the bases projecting out sideways from the sugar.

The sugar and phosphate groups in the structure of nucleic acids are identical all the way along the chain; in other words the backbone is absolutely stereotyped and shows no variation. In RNA all the sugars are ribose; in DNA. They are all deoxyribose. The phosphate groups are identical in both RNA and DNA the bases, are however, show no such uniformity. We have already noted that there are five different ones: A, G, C, T, and U. is replaced by U. Now the sequence of bases occur along the length of the nucleic acid chain varies from species to species and from individual to individual. It is in this sequence of base that the nucleic and acid carries information controlling the organism’s development. It may seem strange that all the instructions required organism’s development. It may seem strange that all the instruction required to produce an organism as complicated as, say, a human being, should be conveyed by only four kinds of base, but when we bear in mind that a single nucleic acid molecule may contain a total of five million nucleotides, the number of words can be constructed which, though meaningless in our own language, may convey meaningful information in the cell. 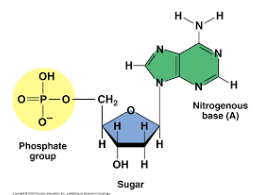 But we are leaping ahead of the story, for although the chemical components of nucleic acids and indeed in the structure of nucleic acids were known at the time that Avery did his experiments on pneumococcus, their significance was not appreciated. In fact even after Avery’s work some biologist were reluctant to accept that nucleic acids were of genetic importance.

Genes as we have seen, determine an organism’s characteristics, and through them these characteristics are handed on to the offspring. This means that genes must contain information,  a set of instruction if you like, telling the organism how to develop. It also follow that genes must be able to reproduce themselves, or replicate, without losing any of this information, otherwise the instructions they carry will be progressively diluted in successive generations.

In searching for the chemical nature of the gene and by extension, the structure of nucleic acids, we must therefore look for a molecule that contains information and is capable of replication. For many years protein was considered the only possible candidate because it alone seemed to have the structural diversity necessary for carrying genetic information. However, in 1944 Oswald Avery of the Rockefeller Institute in New York produced evidence that nucleic acid rather than protein is the carrier of genetic information. Let us take a look briefly at what he had done.

Evidence that Nucleic Acid is Involved In Genetics

The bacteria that cause pneumonia, Pneumococcus, exist in two different strains, capsulated and non-capsulated. The former are characterized by the cells being surrounded by a thick capsule. This contrasts with the non-capsulated strain in which a capsule is completely missing. Avery and his colleagues prepared a medium containing disrupted capsulated bacteria; it contained no living bacterial cells, just the chemicals extracted from them. Into this medium non-capsulated bacteria were introduced and allowed to grow. The remarkable thing was that the non-capsulated bacteria developed capsules, as did their descendants. The conclusion to be drawn is that a chemical constituent in the extract of capsulated bacteria is capable of bringing about a permanent and inheritable change in the non-capsulated strain. The question is: what particular component of the extract does the trick? By systematically isolating, purifying and testing the different chemical constituents, Avery and his colleagues were able to show that nucleic acid is the active agent. With the subsequent confirmation of Avery’s result by similar bacterial transformations the attention of biologists was riveted on nucleic acids.