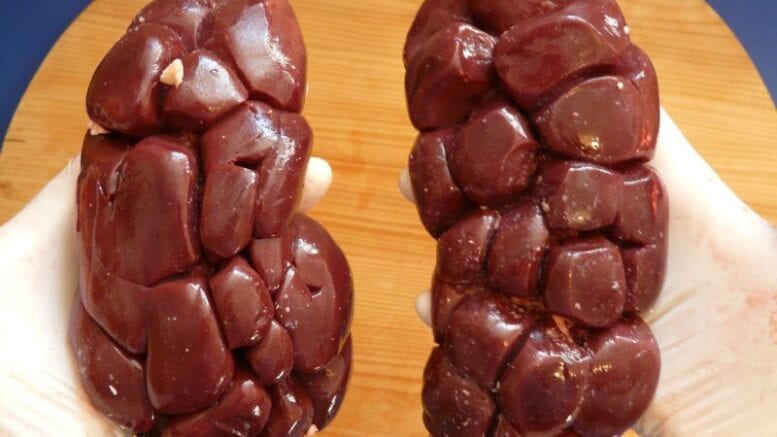 Excretion is the removal from the body of the toxic waste products of metabolism. The term is generally taken to mean nitrogenous waste such as urea and ammonia, but other materials like carbon dioxide and the bile pigment are also waste products of metabolism, and their removal is as much a part of excretion as the elimination of urea and this is one of the major functions of the mammalian kidney. However, in this article, we shall confine ourselves to nitrogenous excretion

It may strike you as odd that these two physiological processes, excretion and osmoregulation, should be considered together when studying the functions of the mammalian kidney. However, both are concerned with homeostasis and the physiological mechanisms involved are intimately bound up with each other. Indeed in the mammal the same organ performs both functions. This is the kidney to which we must now direct our attention.

There are two kidneys, one on each side of the abdomen, and each contains between one and two million nephrons, loosely embedded in connective tissue and amply supplied with blood. The nephron can be regarded as the functional unit of the kidney, performing both functions of excretion and osmoregulation. To understand the functions of the mammalian kidney and how it does this we must first look at its structure.

STRUCTURE OF THE NEPHRON

Leading from Bowan’s capsule is a tubule, about 60µm in outer diameter, whose lumen is continuous with the capsular space. The first part of the tubule, known as the proximal convoluted tubule, is contained in the cortex and is highly coiled. This leads to a U-shaped loop of Henle which plunges down into the deeper part of the kidney (the medulla) where it does a hair-pin bend and returns to the cortex. Here it leads on to another coiled section, the distal convoluted tubule, which opens into a collecting duct, along with several other nephrons. The ducts converge at the pelvis of the kidney, shedding their contents into the ureter which conveys the urine to the bladder for temporary storage.

The essential job of the kidney is to purify the blood which flows through it, extracting the eliminating harmful substances. To this end it has an extensive blood supply. It is true that the total flow of blood through the kidney per unit time is not as great as through the liver, but the flow per weight of tissue is far greater than for any other (700 cm3/min/100g tissue). It has been estimated that the total length of blood vessels in both kidneys is of the order of 160 kilometers.

Although a few substances are known to be secreted from the blood into the tubules, the kidney accomplishes its task of purifying the blood mainly by the use of filtration and reabsorption. The fluid components of the blood are filtered from the glomerulus into the capsular space. As the resulting fluid flows along the tubules useful substances are reabsorbed back into the blood stream whilst unwanted substances flow on to the ureter and bladder as urine. Let us examine each of these processes in turn, first filtration and then reabsorption.

Our knowledge of what happens in Bowman’s capsule, and indeed in the whole nephron, is largely founded on a series of elegant experiments carried out by A.N. Richard at the University of Pennsylvania in late 1930s. Richards inserted a micro-pipette into individual capsules and drew off very small quantities of fluid from the capsular space. The fluid was then analyzed. Most of these experiments were done on the kidneys of frogs and salamanders in which glomeruli can be seen more clearly than in the mammal, but later experiments on mammals gave similar results. It was found that the fluid in the capsular space has exactly the same composition as blood plasma minus the plasma proteins. It seems that the capsular fluid is formed by a process of ultra-filtration from the glomerular capillaries. The filtrate (glomerular filtrate) contains all the constituents of blood except for the plasma proteins and the blood cells: i.e. those components of blood which are too large to pass through the barrier between the glomerular capillaries and the capsular space.

In order for ultra-filtration to occur two things are necessary. First, the barrier must be so constructed as to retain molecules above a certain size whilst allowing smaller ones to pass through. Second, there must be head of pressure to force fluid through the filter. Research on the functions of the mammalian kidney has shown that both these conditions are satisfied in the glomerulus.

In further explaining the functions of the mammalian kidney, we must first understand that the electron microscope has shown that the endothelial lining of the glomerular capillaries is pierced by numerous pores, approximately 0.1µm in diameter, quite large enough to let through all the constituents of plasma but too small to let the cells through. The endothelial cells rest on a basement membrane on the other side of which are the epithelial cells of the capsule membrane on the other side of which are epithelial cells of the capsule. The electron microscope has shown the latter to be quite unlike ordinary epithelial cells. Instead of adhering together to form a continuous sheet, they are diffusely arranged into an irregular network. Each cell, known as a podocyte bears numerous major processes from which much finer minor processes extend to the basement membrane of the capillary endothelium. Narrow spaces lie between adjacent epithelial cells and between the minor processes which attach them to the basement membrane. These spaces, like the pores in the capillary endothelium, are large enough to allow the passage of blood plasma.

If the pores and spaces described above are large enough to let through all constituents of blood plasma, which component of the barrier serves as the dialyzing membrane separating the proteins from the rest of the plasma? The answer is that it must be the basement membrane. This is the only continuous of the barrier which has not got holes in it large enough to let through the plasma proteins. It is exceedingly thin and as such offers minimum resistance to the passage fluid.

The second requirement for ultra-filtration is pressure. It has long been known that the blood pressure in the kidneys Is considerably higher than in other organs. The reason for this is that the efferent vessel in which blood is removed from the glomerulus is considerable narrower than the afferent vessel. The resulting high blood pressure in the glomerular capillaries tends to force the fluid constituents of the blood into the capsular space. This hydrostatic pressure is opposed by the osmotic pressure of the plasma proteins which tends to hold the plasma back in the capillaries. However, in normal circumstances the osmotic pressure, so there will be a gradually reduced by replacing the heart with a mechanical pump there comes a point, round about 8.0kN/m2 , when the pressure falls below the osmotic pressure of the plasma proteins, and the production of urine ceases.