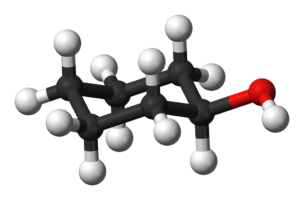 Cyclohexanol is an organic substance. Carbon and hydrogen are the constituent elements of all organic compounds. It also contains oxygen due to the presence of an alcohol functional group. (It is a hydroxyl group as well.)

Cyclohexanol is a six-membered cyclic alkane derivative of cyclohexane. The alkane is oxidized in air to produce cyclohexanol. Cobalt is the catalyst used.

C6H12O is the chemical formula for cyclohexanol.

The name cyclohexanol hints at its chemical structure. A closed ring is referred to as a cyclo. Hexa stands for six. The compound contains six carbon atoms. The alkane following hex has single carbon-atom bonds. The alcohol functional group is denoted by the symbol OH.

As a result, the cyclohexanol structure is made up of a closed ring of six carbon atoms connected by only single bonds. As a substitute, there is an alcohol group (hydroxy group).

Each vertex corresponds to a carbon atom. The single lines connecting the vertices indicate that the carbon atoms are connected by a single bond.

An alcohol group is attached to the hexagon at one vertex.

Some of the properties of cyclohexanol are as follows:

Cyclohexane is manufactured on a large scale by reacting benzene with hydrogen.

Cyclohexanol is made by oxidizing cyclohexane in air, typically with cobalt catalysts:

This process co-forms cyclohexanone, and the resulting mixture (“KA oil” for ketone-alcohol oil) is the primary feedstock for adipic acid production.

Cyclohexanol has numerous applications, the most common of which is as an intermediary in the production of other organic compounds. Cyclohexanol is used in the following situations:

Is cyclohexanol soluble in water?

Yes, cyclohexanol is water soluble. At 25 degrees Celsius, its solubility is 37.5 g/L. It results in a weakly acidic solution.

What is the purpose of cyclohexanol?

Cyclohexanol has numerous industrial applications. It is used in the manufacture of paints, varnishes, and lacquers as a plasticizer and stabilizer, as well as in the preparation of nylon.

No, they are not the same compound. Cyclohexane, with the formula C6H12, is a cyclic alkane. Cyclohexanol is classified as a secondary alcohol. The alcohol or hydroxyl group has been substituted for one of the hydrogen atoms in cyclohexane.

Is cyclohexanol considered a primary alcohol?

Cyclohexanol, on the other hand, is not a primary alcohol. Because the carbon atom carrying the alcohol group has bonds with two other carbon atoms, cyclohexanol is classified as a secondary alcohol.

What is the number of carbons in cyclohexanol?

What is the chemical formula for cyclohexanol?