You Are Here: Home » The Working Principle and Uses of a Sextant

The sextant is an instrument used in navigation for measuring the angle of elevation of the sun or stars. It consists essentially of a fixed glass B, silvered on a vertical half, and a silvered mirror O which can be rotated about a horizontal axis. A small fixed telescope T is directed towards B. 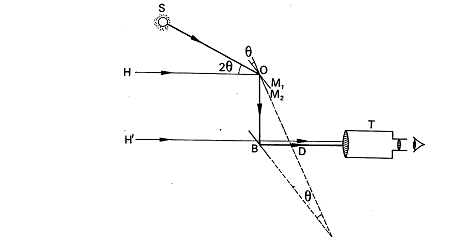 Suppose that the angle of elevation of the sun, S, is required. Looking through T, the unsilvered half, of B, and also the view of it, H, seen by successive reflection at O and the silvered half B, are coincident. The mirror O is then parallel to B in the position M1, and the ray HO is reflected along OB and BD to enter the telescope T. the mirror O is now rotated to a position M2 until the image of the sun, S, seen by successive reflections at O and B, is on the horizon H’, and the angle of rotation, Ө, of the mirror is noted.

Since the angle of deviation after two successive reflections is independent of the angle of incidence on the first mirror, the image of the suns through T will continue to be seen on the horizon once O is adjusted, no matter how the ship pitches or rolls. This is an advantage of the sextant.

You can read more on the design, use and principle behind the use of a sextant by following this link

The Working Principle and Uses of a Sextant