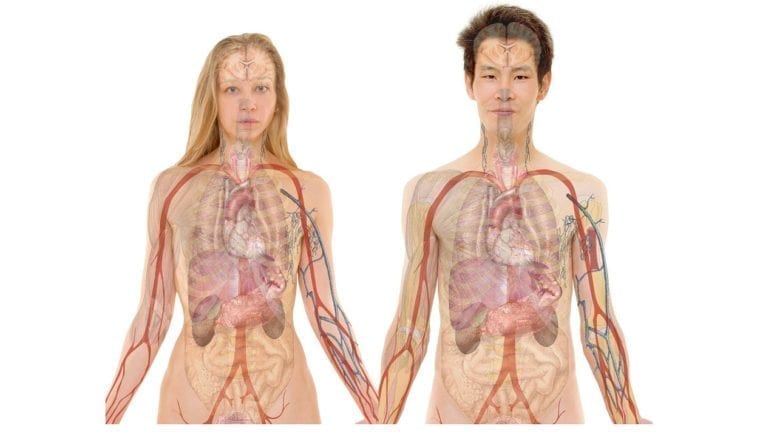 Homeostasis is the sequence of biological actions and responses facilitated by hormones that leads o the maintenance of a stable and regulated internal environment in the body. The normal value of sugar in the human bloodstream is approximately 90mg/100cm3, and even after the heaviest carbohydrate meal rarely exceeds 150mg/100cm3.  What keeps it constant? Before trying to answer this question let us briefly consider what happens to glucose after it has been absorbed from the small intestine into blood stream. You will recall that after entering the hepatic portal vein, it is conveyed to the liver. In the liver three main things may happen to it:

The level of glucose in the blood and tissue fluids at any given moment is mainly determined by the relative extent to which these different processes occur in the liver. If there is too much glucose, as for example after a heavy meal rich in carbohydrate, the liver metabolizes what it can, and strores the rest as glycogen. If there is a deficiency of glucose, the liver breaks down glycogen into glucose, thereby raising the glucose level in the body. In cases of prolonged deficiency glucose may be formed from non-carbohydrate sources, even protein. The wasting away of the tissues, which occurs in extreme starvation, is because the body resorts to converting its protein into carbohydrate.

THE ROLE OF INSULIN IN HOMEOSTASIS

Clearly insulin plays a vital role in the regulation of glucose. Without it the liver cannot respond appropriately to the needs of the body. This can be illustrated by considering what happens if the pancreas is surgically removed from an animal. The result is a drastic increase in the general level of glucose in the blood, accompanied by a decrease in the glycogen content of the liver and muscles. The blood sugar levels exceeds its normal value (a condition known as hyperglycaemia); when it reaches a critical level, glucose starts to be excreted in the urine, a condition called glycosuria. These conditions can be quickly reversed if insulin is injected into the bloodstream.

Certain individuals have islets of Langerhans which, for one reason or another, are unable to produce as much insulin as they should. The result is a condition known as diabetes mellitus, the symptoms of which are similar to those seen in an animal deprived of its pancreas. There is a n increase in the blood sugar lever (hyperglyaemia), and sugar appears in the urine (glycosuria). If untreated, the condition is fatal. Diabetes can be prevented by regular injection of insulin. Unfortunately the hormone cannot be taken by mouth as it is a protein and is digested in the alimentary canal. A diabetic must therefore inject himself with insulin at regular intervals. The existence of insulin, and its role in regulating sugar and preventing diabetes, was discovered by the Canadian physiologist Fredrick Banting and Charles Best in the early 1920s. Their discovery stands as a landmark in the history of physiology and clinical medicine.

WHAT CONTROLS THE SECRETION OF INSULIN?

We have seen that the liver, under instruction from the pancreas, regulates the body’s sugar level. What regulates the production of insulin by the islets of Langerhans? There is good reason to believe that it is the amount of glucose in the blood itself which is the effective agent. If the blood sugar level is abnormally high, this stimulates the islet cells to produce corresponding more insulin. On the other hand if the blood sugar level is low, less insulin is secreted. In other words the sugar itself switches on the mechanism by which it is itself regulated, as excess of sugar setting into motion the physiological processes which return the sugar level to its normal value.

SOME GENERALIZATIONS ABOUT HOMEOSTASIS

Regulation of sugar illustrates an important principle of homeostasis, namely that the corrective mechanism is triggered by the very entity which is to be regulated. In other words homeostasis involves a self-adjusting mechanism, the control process being built into the system.

The sugar story illustrates another principle homeostasis: Negative Feedback:This is the term given to the fact that, in the case of sugar-regulation, an increase in the amount of sugar sets into motion processes which decrease it. Conversely a decrease in the sugar level set into motion processes which increase it. In other words a change in the sugar content of the blood automatically brings about the opposite effect. In both cases the result is that the level of sugar is kept reasonably constant.

Another generalization emerging from this is that homeostasis must necessarily involve fluctuation, small though these may be. The control of sugar can obviously only work if there is a periodical increase, or decrease, in the sugar level. The blood sugar level does not, and cannot, remain absolutely constant, but wavers within narrow limits on either side of an optimum value which we can call the norm as set-point. Only be deviating form this norm can the homeostatic mechanism be brought into play which restores the sugar to its normal value. What invariable happens is that when the blood sugar falls, it overshoots the mark and drop below the norm, thus triggering the corrective processes which cause it to rise again, and so on.

These basic principles underlie all homeostatic mechanisms. Their effectiveness depends on negative feedback. Sometimes the corrective mechanism leading to negative feedback breaks down with the result that a deviation. This is described as positive feedback, examples of which will be considered in later chapters.

We have seen how homeostasis works in the regulation of sugar. Later we shall apply it to the regulation of osmotic pressure, temperature and respiratory gases. It is by no means confined to physiological situations. The size of a population of animals or plants Is kept constant by a homeostatic process, and essentially the same mechanism maintains the constancy of species over long periods of time

Nor are homeostatic mechanisms confined to biology. To take a very obvious example, the thermostat operates on a homeostatic basis, switching itself on or off according to the temperature. Many machines involve similar principles, and even industrial processes, economic system, and stabilization of prices can be analyzed in similar terms.

The term now used to embrace all these concepts is cybernetics, the science of communication and control. A Greek word meaning ‘steersman’ the term was first coined by the Fresh physicist and mathematician A.M. ampere over a hundred years ago, but it was applied more widely by Norbert Wiener in 1948. The term is now used as a unifying concept to include all forms of self-adjusting mechanism both in machines and organisms.

The Commercial Importance and Use of Cellulose