You Are Here: Home » How a Refrigerator Works and the Liquefaction of Gases 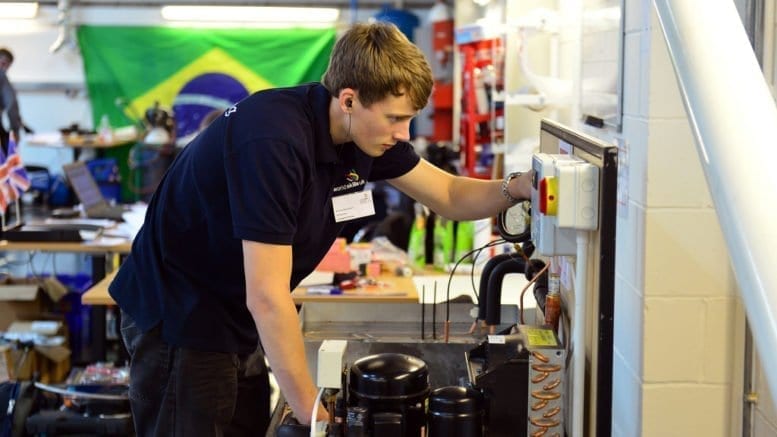 The science behind how a refrigerator works is a novel area of study that physicists have continued to improve upon, delivering very efficient and smart refrigeration systems for homes and offices. In explaining the working principle of a refrigerator, we must first understand the concept of gases and vapor and how liquefaction of gases occur. A gas above its critical temperature cannot be liquefied. Early attempts to liquefy gases such as air, by compression without cooling, failed; and the gases were wrongly called ‘permanent’ gases. We still, for convenience, refer to a gas as a vapor when it below its critical temperature, and as a gas when it is above it. But the distinction is not the same as that between an ideal gas and one which is far from ideal. For a gas which is near its critical point, though it may be a little above its critical temperature, does not obey Boyle’s law. On the other hand, a vapor which is far from saturation obeys Boyle’s law fairly well.

The action of a refrigerator ( how a refrigerator works ) depends largely on the absorption of its latent heat by a liquid . The liquid must be one whose vapor has a critical temperature that is above the normal atmospheric temperatures, so that it will  be liquefied by compression. Examples of liquids used as refrigerant substances include carbon dioxide, ammonia and sulphur dioxide and the specially developed substances and compounds such as Freon which has two varieties): CCl2F2,  and C2Cl2F4. The working substance is usually compressed by a pump and then passed through a metal pipe. Here, the heat of compression is then taken away by circulating water, resulting in the liquefaction of the liquid. The liquid then passes into a reservoir from where it escapes through a throttle valve and into a coil which is connected to the low pressure side of the pump.

When the liquid escapes from the reservoir, it begins to evaporate due to low pressure. the liquid draws its latent heat from its own heat content, and then cools. Note that not all of the liquid evaporates as it comes forth, and that the mixture of cool liquid and vapor is passed round the metal coil. If the condition in the chamber containing the coil is warmer than the liquid, the liquid evaporates even further. The latent heat which it needs is furnished by the surroundings of the coil.

HOW LIQUEFACTION OF GASES OCCUR

If one of the so-called permanent gases, hydrogen or nitrogen, is to be liquefied, it must first be cooled below its critical temperature. There are three principal ways of doing this (i) the gas may be passed through a cold bath containing a more easily liquefied gas. Which is boiling at a reduced pressure and therefore has a very low temperature; (ii) the gas may be allowed to expand adiabatically and do work, losing its heat-energy in the process; (iii) the gas may be cooled by a method depending on the fact that, for a real gas, the internal energy is not independent of the volume.

The third of these is the commonest nowadays, and the only one which we shall describe. First we must explain the phenomenon on which it depends.

The principle behind how a refrigerator works can also be explained by the Joule’s crude experiments on the expansion of a gas into a vacuum ‘free expansion,’ as it is called. These experiments suggested that in such an expansion, the gas lost no internal energy, and therefore did no work. We concluded that the molecules of a gas had negligible attraction for one another, since otherwise work, would have had to be done against their attractions whenever the gas expanded.

In 1852, Joule and Kelvin made more delicate experiments of essentially the same kind. They allowed a gas at high pressure to expend into a vacuum through a plug of cotton wool. The plug prevented eddies from forming in the gas, so that the gas did not acquire any kinetic energy of motion in bulk. Neither did the gas do nay external work, since it pushed back no piston. Nevertheless, Joule and Kelvin found that the gas was cooled slightly in its passage through the porous plug. Therefore work must have been done in separating its molecules; and this work must have been done at the expense of their kinetic energy, the heat-energy of the gas.

The magnitude of the cooling in the Joule-Kelvin effect depends on the temperature at which the gas enters the plug; for air at room temperature it has the order of 0. 1C per atmosphere pressure difference.

It is not essential for the gas to expend into a vacuum. Whenever a gas expends from high pressure to low, its volume increases, and some work is done against its inter-molecular attractions. If heat cannot enter the gas, the work is done at the expense of the gas’s internal energy, and the gas cools. The cooling is analogous to that which takes place in an adiabatic expansion with external work, but not in a free expansion-it would show on Joule-Kelvin effect.

Classification and Production of Spectra through Excitation