The Principle of Recording Sound on a Tape or Film - GulpMatrix

You Are Here: Home » The Principle of Recording Sound on a Tape or Film 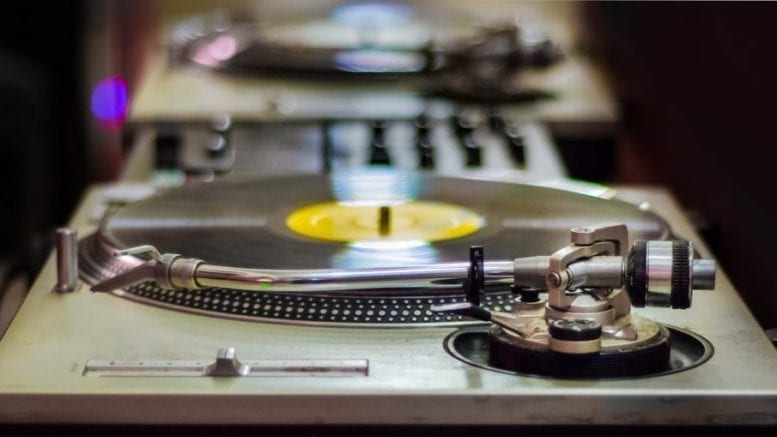 We shall consider the principles of recording sound on tape and on film, and its reproduction. In the world of electronics where music and sound systems play very crucial roles in our social life, there is the need for the production of high quality music and sound equipments that would meet the demands of evolving technology. Therefore, we shall take a look at the working principles and technology involved in recording sound on tape or a film.

The diagram below illustrates the principle of tape recording in which flexible tape is used. It is coated with a fine uniform layer of a special form of ferric oxide which can be magnetized. The backing is a smooth plastic base tape. When recording, the tape moves at a constant speed past the narrow gap between the poles of a ring of soft iron which has a coil round it. The coil carries the audio-frequency (af) current due to the sound recorded. On one half of a cycle, that part of the same cycle, the next piece of tape in the gap is magnetized in the opposite direction, as shown. The rate at which pairs of such magnets is produced is equal to the frequency of the af current. The strength of the magnets is a measure of the magnetizing current and hence of the intensity of the sound recorded.

In ‘playback’, the magnetized tape is now run at exactly the same speed at the same or another ring, the playback head.  As the small magnets pass the gap between the poles, the flux in the iron changes. An induced emf is thus obtained of the same frequency and strength as that due to the original tape recording. This is amplified and passed to the loudspeaker, which reproduces the sound. 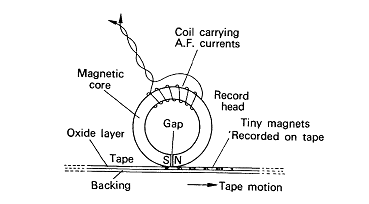 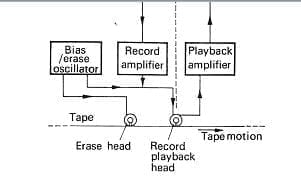 One method of recording sound on film, in the form of a variable area sound track, is illustrated in the diagram below. A triangular aperture or mask T is brightly lit by a high-wattage lamp. After passing through T the light is reflected by a mirror M, and the rays are brought to a focus on to a slit S by a lens L1. By rotating the mirror slightly, as shown, the image T’ of T, produced by the slit, can be moved up and down. This varies the length of slit illuminated. The light passing through the slit is collected by another lens system L2 and focused on a trip of moving unexposed film. The mirror M is mounted on the moving system of a galvanometer, so that it moves at the same frequency as the audio frequency currents passed through the galvanometer coil. The area of the film exposed thus varies as the audio-frequency signal. Hence when the film is developed, a permanent sound recording or sound track is the film is developed, a permanent sound recording or sound track is obtained. 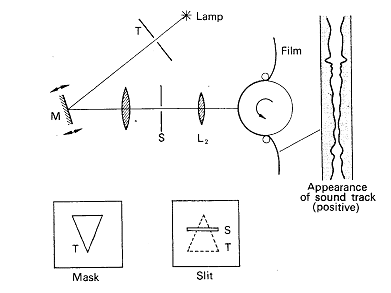 The diagram below illustrates the principle of reproducing the sound track and passes through to a photo-electric cell. This contains a light-sensitive metal surface such as caesium, which then emits a number of electrons proportional to the light intensity. A current therefore flows in a resistor R. the sound track is coupled to the film, and as it moves, an audio-frequency current flows in R. the pd developed is amplified and passed to the loudspeaker. 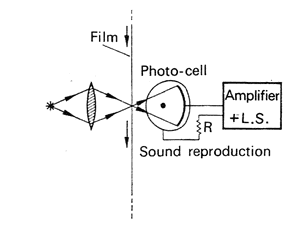 The Principle of Recording Sound on a Tape or Film