In discussing Pollination, we must first look at structure of the flowers of some plant genera. In many genera, e.g. Taraxacum (dandelion), Bellis (daisy), the anthers have matured and the pollen is distributed long before the stigmas of the same flowers are receptive. Such flowers are protandrous. In fewer genera, e.g. Scrophularia (figwort), Luzula (woodrush), the stigmas are receptive long before the anthers are mature in the same flower. Such flowers are protogynous. The condition in which anther maturity and stigma receptiveness do not coincide is known as dichogamy.

In most flowers, details of structure favor the possibility of cross pollination in one or more of several different ways. Stigmas and anthers may be so located that it is unlikely that pollen can reach the stigma of the same flower unless carried there, e.g. pin-eyed primrose. When the flower is insect-pollinated, the nectarines are usually located where they can be reached by particular types of insect only, e.g. long-tongued or short-tongued. Likewise, the anthers and stigmas are so placed that the visiting insect will come into contact with them while reaching the nectarines. If such flowers are protandrous or protogynous, then the insect, having previously visited flowers of different ages, can readily cross-pollinate them. To achieve this, a flower may be very markedly irregular in structure and develop long corolla tubes or spurs in which to locate the nectarines.

Separation Of The Sexes

If individuals of a species produce gametes of one kind only, then cross-pollination is the only possibility. Nearly all animals and a few plants have achieved this condition and are said to be unisexual. It is to be noted that unisexual flowers on the same plant, i.e. the monoecious condition, does not automatically imply cross-pollination.

It is very often the case that even though pollen may reach the stigma of the same flower, it is unable to develop, or if it does, then development is slow. This is due to inhibition of its growth by the stigma. Whilst this is not really a case of prevention of self-pollination, it has the same effect ultimately, since it prevents, or at least retards self-fertilization.

Production Of Two Types Of Flowers

Some angiosperms produce two distinctly different types of flower, both hermaphrodite. Often the two types produce different kinds of pollen and they are self-incompatible. Such is the case in many members of the Primulaceae, e.g. primrose, polyanthus.

The act of pollination is purely a step towards the ultimate union of two gametes; the act of uniting the two gametes is the fertilization process. When pollination has been effected, the pollen grain, containing the male gametes or the generative nucleus from which they are derived, is still separated from the ovule containing the female gamete by the length of the style and the carpel wall. In order for a male gamete to reach the female ovum it might be conveyed by some means through the intervening issues. This is achieved by the further growth of the pollen grain to form a pollen tube which penetrates the tissues of the stigma, style. Carpellary wall nucellus of an ovule to make contact with the embryo sac. through this tube. The male gametes pass. They are non-motile and are conveyed in t he cytoplasm at the tip of the advancing tube. Such a siphonogamous mechanism contrasts with the zoidogamous fertilization method found in the lower plants, in which motile male gametes make their own way to the female gamete through external water. The angiosperms and most gymnosperms have become sufficiently well adapted to land conditions to be able to dispense with the need for water for this purpose. 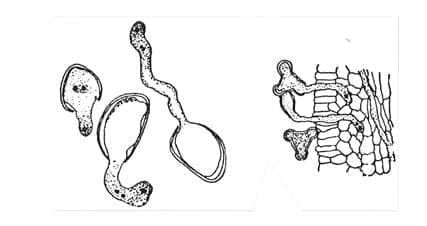 The development of a pollen grain on a stigma may show slight variation for different species, but most would follow the pattern to be described. First, unless a pollen grain is upon the stigma of its own species, it does not develop at all, or soon ceases growth after initial germination. There are exceptions to this in a few cases; for example, in the formation of rare hybrids such as the cabbage-radish cross. For full development, certain conditions must be fulfilled. There must be the presence of a sugary solution, with a concentration inside certain limits. There must be physiological compatibility with tissue of the style. The sugary solution is provided by the sticky stigma, and generally speaking, the strength of this solution is constant for a particular species. Most pollen grains will not germinate in solutions with a concentration much outside the value for their species. It may lie between 5 percent and 30 percent cane sugar. Physiological compatibility is bound up with the genetics of the species and pollen will not develop on stigmas of plants with the same genetical constitution as the plant which produced the pollen. Hence the need for “pollinators” for some fruit trees, e.g. Cox’s orange pippin apple.

If the conditions for the germination are correct, the pollen grain proceeds to push out a delicate germ tube or pollen tube which penetrates the tissues of the stigma. This is an outgrowth of the intine, or delicate inner wall, through a pit in exile. Material for its formation is initially provided by the pollen grain itself, which is rich in protein and fatty substances. On penetrating the stigma tissues, the tube proceed by digestion of surrounding cells. The tube secretes enzymes into the stigmatic and stylar tissues to bring about this digestion. Growth activity of the pollen tube is apparently bound up with the presence of the tube nucleus at its advancing tip, and as the tube pushes further into the tissues, the tube nucleus advances with it. Just behind the tip are two male nuclei, which, if not already present when the pollen was shed, are produced by division of the generative nucleus soon after germination of the pollen grain. Slowly the tube traverses the tissue of the style, and eventually it enters the cavity (loculus) of the carpel in which the ovules lie. The tube crosses this cavity and reaches an ovule. In the general case, it penetrate the ovule tissues through the micropyle, the porogamous case, but it is not a rarity to find penetration through the chalaza, i.e. the chalazogamous case. Gradually, it grows towards the embryo sac and eventually reaches and penetrates it roughly between the two synergidae. These may play some part in guiding the pollen tube to its destination, but what it may be, is unknown. When the embryo sac has been penetrated, the tip of the pollen tube opens. The tube nucleus disintegrates, if it has not done so already, and the way is clear for the gametes to enter the embryo sac. The first to enter passes between the synergidae and fuses with the oosphere to form the zygotic nucleus. The second passes by this diploid fusion nucleus and migrates further into the embryo sac until it reaches the polar nuclei (or definitive nucleus if these have already fused) and all three nuclei fuse to form one triploid nucleus, sometimes known as the triple fusion nucleus. The antipodal cells take no part in nuclear fusions and in some cases disappear quickly. These acts of nuclear fusion are the culmination of the fertilization process. From the zygote, the embryo develops and from the triple fusion nucleus, the endosperm is formed. The embryo becomes embedded in this endosperm.