Plants are important sources of food, and advances in biotechnology can be used to enhance crop yields, reduce post harvest losses, and improve disease and drought resistance. This, in turn, could lead to greater global food availability and access to nutritious diets.

Plant biotechnology is the science of upending biological principles to enhance the growth and development of plants of either agricultural, horticultural, and forestry value. Contemporary plant biotechnology utilizes a vast range of techniques to analyze, modify, generate and exchange genetic information between organisms, allowing incredible potential to improve crop yields, reduce susceptibility to pests, and enhance the utilization of water, fertilizers, and other resources. With regard to food production, biotechnological practices could allow crops to better endure unpredictable and changing weather, increase the nutritional value of produce, and combat widespread poverty through enhanced food accessibility for farmers.

Plant biotechnology includes areas such as genetic engineering, tissue culture, and combinatorial biology. It can also involve the transfer of genes between species to, for example, encourage more efficient growth or production of certain substances, or to increase the plant’s resistance to insects or other predators.

Plant biotechnology is a quickly growing field with many exciting implications for scientific and economic advancement. Plant biotechnologists are responsible for researching and developing strategies to utilize plants to create products with myriad potential applications. Such products include pharmaceuticals, biofuels, and even improved crop plants. Plant biotechnology has a tremendous potential to revolutionize the agricultural industry and beyond.

Plant biotechnology is one of the most promising avenues for the pharmaceutical industry. A number of plants produce chemicals and compounds with medicinal properties, and plant biotechnologists study and find ways of extracting and manipulating these compounds to create medicines that can treat a range of maladies. One of the more well-known examples of this is foxglove, a flowering plant that produces digitalis, a compound used to treat congestive heart failure.

Another common use for plant biotechnology is the production of biofuels. Biofuels are made by extracting sugars from plants and converting them into fuel sources, such as ethanol. This process is known as fermentation and is relatively inexpensive compared to traditional fuel production. In addition, biofuels are renewable, which means they can be produced over and over again without using up finite resources.

Improved crop plants are another way that plant biotechnology can aid in both scientific and economic progress. By using various techniques, such as genetic modification and traditional cross-breeding, plant biotechnologists are able to engineer plants that have a variety of desirable traits, such as disease resistance, drought resistance, and higher yields. As a result, these improved crop plants can provide a better harvest for the farmer and help make the agricultural industry more resilient in the face of the ever-changing environment.

Impact on the Agricultural Industry

The application of plant biotechnology has already had a significant impact on the agriculture industry. Improved crops, such as corn, soybeans, and wheat, have increased crop yields and helped farmers maximize production. Furthermore, biofuels created from plants have provided an additional source of revenue for farmers, as well as an environmentally friendly fuel source for the automotive industry. These benefits, along with the many more that have yet to be realized, provide ample evidence of the potential of plant biotechnology.

READ MORE:  The Role of Phloem Tissues in Translocation of Organic Substances

The Pros & Cons of Plant Biotechnology 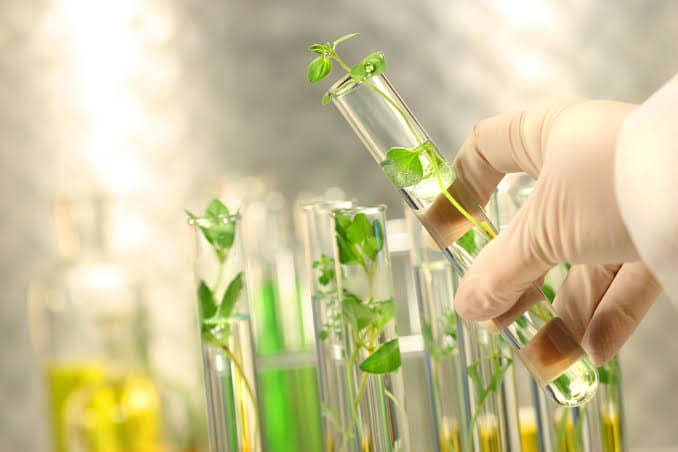 Plant biotechnology has become an increasingly popular tool in modern agriculture, giving scientists an unprecedented ability to genetically alter living organisms and agricultural products to improve yield, resist pests and diseases, and create compounds impossible to otherwise obtain. But, like all innovations, plant biotechnology also carries with it some risks that must be weighed against its potential to change the food production industry for the better.

The Pros of Plant Biotechnology

One of the greatest advantages of plant biotechnology is its potential to make crop production more efficient and profitable. Advanced genetic modification techniques can make crops more resilient, pest-resistant, and nutrient-rich, reducing the need for expensive and toxic chemical inputs often employed in traditional agricultural practices. Genetically modified crops can also be developed to survive in extreme climates, such as drought-stricken areas, making them a potential solution to global food crisis.

The benefits of plant biotechnology are not limited to product quality and crop yield; it can also help reduce water usage and pollution, as well as lead to better nutrition. For example, scientists can genetically modify crops to make them more nutrient-rich and better for human health. This has the potential to reduce malnutrition in developing countries, where access to fresh, nutritious food can be difficult to come by.

The Cons of Plant Biotechnology

Unfortunately, the potential advantages of plant biotechnology come with some drawbacks. Genetically modified crops may become resistant to certain herbicides, causing their widespread use and potential impacts on biodiversity. Additionally, there may be long-term side effects relating to health, such as unintended changes to food nutrition or the creation of new allergens. As such, strict regulatory frameworks are necessary to ensure genetically modified crops are safe for human and animal consumption.

One of the biggest concerns regarding plant biotechnology is its potential to cause irreversible damage to the environment. Genetically modified organisms can intermingle with natural organisms, potentially creating unexpected consequences. In some cases, this could create “superweeds” that are impossible to eradicate, or changes to native flora and fauna. Further, large-scale genetic alteration can reduce genetic diversity of a species, making it more susceptible to diseases, pests, and environmental changes.

Finally, there are socio-economic risks associated with biotechnology that cannot be overlooked. One example is the fear of increased control over food production and supply by biotechnology companies. Additionally, small-scale farmers in developing countries may be unable to afford the cost of genetically modified seed, and thereby be driven out of business by those with access to such tools.

Plant biotechnology is a powerful and useful tool with the potential to revolutionize crop production and reduce hunger and malnutrition. However, there are valid concerns that must be weighed carefully when evaluating the potential impacts of biotechnology on the environment, health, and socio-economics.