What is Propylene?  What are the procedures involved in Propylene production? Propylene also known as propene or methyl ethylene is an organic compound that is unsaturated.

The chemical formula of Propylene is C3H6, this means 3 atoms of carbon and 6 atoms of hydrogen are present in Propylene.

– Appearance:
Propylene is a colorless gas.

Chevron Phillips Chemical produces 3 billion lb yearly of polymer grade propylene at its facilities in Texas. Propylene maybe the oldest type of petrochemical feedstock in the gas industry. it is also known as 1-propene, and is probably one of the smallest stable unsaturated hydrocarbon molecules still used in the gas industry.

The propylene molecule is a co-product of ethylene production through the steam cracking (steam pyrolysis) of hydrocarbon feedstocks. Feedstocks which are used for steam cracking range from ethane to naphtha and gas oils. Propylene is also gotten as a by-product of petroleum refining. Propylene is sold in three different quality grades: the first is the refinery quality (~70%), the second is the chemical quality (~92-96%) and the third is the polymer quality (99.5%).

The two important sources of propylene are byproducts from steam cracking of liquid feedstocks like naphtha as well as LPGs, and from off-gases made in fluid catalytic cracking (FCC) units in refineries. The remainder of propylene is made using on-purpose technologies such as propane dehydrogenation (PDH) and metathesis.

The primary source of propylene is from cracking naphtha and other liquids such as gas oil and condensates for ethylene to be produced. By replacing the crack severity and the feedstock slate, the propylene: ethylene ratio can vary from 0.4:1 to 0.75:1. Smaller amounts of propylene can be gotten from cracking propane and butane. The cracking of liquid feedstocks is done generally in places like Europe and Asia but less so in the Middle East and North America. 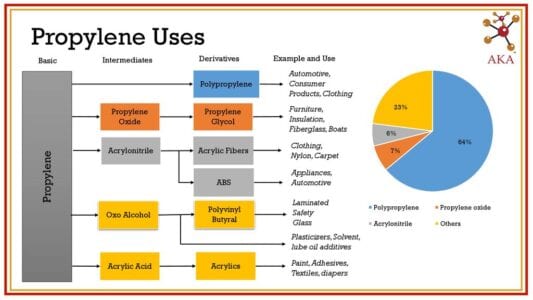 •Propylene (C3H6) is a colourless type of fuel gas with a naturally pungent (strong) smell. Although similar to propane, it has a double bond which gives it a combustion advantage (it burns hotter). This fuel gas is very flammable and also non-toxic. Propylene is gotten during the refining of gasoline. But it can also be gotten from splitting, cracking and reforming hydrocarbon mixtures.

•Propylene is a good alternative to propane for heating and cutting due to its high combustion performance. It is widely used as a fuel gas for a high-velocity oxygen fuel (HVOF) processes. In addition, the chemical and plastics industries rely on propylene as a fuel gas.

• Non-fuel applications include organic synthesis to make materials such as acetone. Propylene can be polymerized to form a polypropylene plastic. It can also be used as a refrigerant, or in calibration mixtures and also as a chemical intermediate. In addition, it is used to test the efficiency of gas burners and engines.