Borax or better known by it’s chemical name, Sodium tetraborate decachydrate and possessing a chemical formula called Na2B4O7, 10H2O, or Na2[B4O5(OH)4], 8H2O is mostly used during flux, glazes and hard preparation in countries such as Egypt, Rome, and other various early civilized countries. Borax is said to be a very important inorganic compound of Boron(A chemical element). It was isolated back in 1808 by Sir Humphry Davy alongside Louis Gay-Lussac, and Louis Jacques Thenard.

During the heating stage of crystalline solid borax, it swells up, which is due it losing hydrated water. But when you heat anhydrous substance, it produces meta-borate as well as boron trioxide. The physical or chemical properties of borax is very identical to the boric acid. This can be achieved by heating boric acid solution with sodium carbonate.

Borax, which we stated earlier is better known as sodium tetraborate decahydrate. The borax anion contains 2 tetrahedral units of BO4 and 2 planner BO3 units, which is shown in the image below: 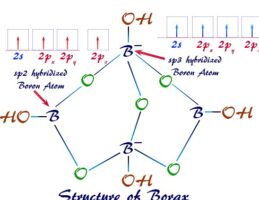 Each of the BO4 unit shares 2 oxygen with the 2 planner BO3 units and one oxygen with the second BO4 unit. The fourth oxygen chemical bonding with the boron of the BO4 unit and a hydrogen atom. Now we need to understand that the planner BO3 unit is sp2 hybridized, but the tetrahedral BO4 unit is considered to be sp3 hybridized. These hybrid orbital surpasses with suitable orbitals of the oxygen and unpaired electrons.

Where Can I Find Borax ?

We can find borax powder in insecticides or pesticides, which is used to kill insects such as cockroaches or ants. We can also find borax powder in antiseptics, mouthwash products, cleaning products, and water softener. According to reports, Borax was first in the dry lake beds of Tibet, before it got imported to Europe so it can be refined. Most companies such as Turkey, California, Chile, Romania, Tibet, and Bolivia are said to be the biggest suppliers of borax powder.

How Is Borax Manufactured ?

There are several ways which borax is being manufactured, and we are going to be going through them, now let’s dive right into it:

But at 62°C, it contains upto 5 molecules of hydrating water in its molecular structure. An aqueous solution is capable of showing alkaline properties, which is due to hydrolysis. It then reacts with water to form a substitute boric acid (H3BO3).

Remember, we stated earlier that when borax is heated, it swells up due the the loss of hydrating water and heating it further produces the chemical compounds known as meta – borate and boron trioxide. The fusion of both borax and metal oxides such as iron, copper, cobalt or nickel forms a bead of metal borate, which looks similar to a characteristic glossy color. This is used in the world of chemistry for the quantitative chemical analysis of what we call metal salts. This test process is known as the borax bead test.

READ MORE:  What is Chemistry and Its Applications

Check the image below: 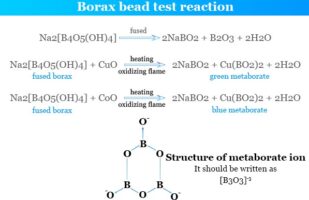 Now, when you fuse metaborate with metal salts heated in oxidation flame, it produces what we call “ic-metaborate” with a characteristic glossy color. But when it is fused with metal salts or perhaps heated in reduction flame, it produces what we call “us-metaborate” with a characteristic glossy color. The fusion of borax with metal ingredients such as copper oxide in an oxidizing flame shows blue cupric metaborate but in reducing flame it shows dull red cuprous metaborate.

The Uses Of Borax