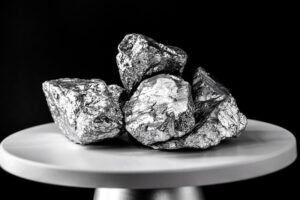 Under normal conditions, platinum metal is chemically inert to attack by mineral acids, air, or water. It has a higher ductility than gold, silver, or copper but is less malleable.

Platinum metals are the elements ruthenium, rhodium, palladium, osmium, iridium, and platinum. All of these elements are extremely rare in the earth’s crust.

Platinum metals are found alongside other noble metals such as copper, silver, and gold.

In the seventh century, platinum was discovered in the tomb of Queen Shapenapit. In 1748, a Spanish expeditioner, Antonio de Ulloa maintained that a certain mineral contain metal with a very high melting point. It was known as Platina (little silver in Spanish)

The atomic number of platinum is 78.

The electrical resistivity of platinum is 105 nΩ·m.

Platinum belongs to the d-block of the periodic table.

The oxidation numbers of platinum are +2, +4.

The electronegativity of platinum is 2.28 (Pauling scale)

The first ionization energy of platinum is 870 kJ/mol while the second is 1791 kJ/mol.

The ionization energy of group-10 elements such as Ni, Pd, and Pt increases with increasing atomic number. Pd and Pt have the same atomic radius due to lanthanide construction.

The Position of Platinum in the Periodic Table

It shares many similarities with palladium, another member of the group. Both +2 and +4 oxidation numbers or states are the most common.

Where can Platinum be Found?

South Africa, Canada, Russia, Brazil, Columbia, and other countries are the primary producers of platinum. It is extremely rare in the earth’s crust, occurring at about 0.01 ppm. The metal is commonly found with Cu, Ag, and Au sulfides and arsenides.

Although platinum is most commonly found in placer deposits, platinum and platinum group metal (PGM) miners typically extract the metal from the platinum-containing ores sperrylite and copperite.

Platinum is always found in conjunction with other PGMs. PGMs occur in sufficient quantities in South Africa’s Bushveld complex and a limited number of other ore bodies to make it economically viable to extract these metals exclusively; whereas platinum and other PGMs are extracted as by-products of nickel and copper in Russia’s Norilsk and Canada’s Sudbury deposits. Platinum extraction from ore is both capital and labor intensive. One troy ounce (31.135g) of pure platinum can take up to 6 months and 7 to 12 tons of ore to produce.

The First Step of Production

The first step in this process is to crush platinum-containing ore and immerse it in water containing reagents, a process known as ‘froth flotation.’ Air is pumped through the ore-water slurry during flotation. Platinum particles bind to oxygen and rise to the surface as froth, which is skimmed off for further refining.

READ MORE:  13 Physical and Chemical Properties of Tin Every Chemist Must Know

The Final Stages of Platinum Production

Even after drying, the concentrated powder contains less than 1% platinum. It is then heated in electric furnaces to over 2732F° (1500C°) and the air is blown through again to remove iron and sulfur impurities. Nickel, copper, and cobalt are extracted using electrolytic and chemical techniques, yielding a concentrate containing 15-20% PGMs.