If one of the so-called permanent gases, hydrogen or nitrogen, is to be liquefied, it must first be cooled below its critical temperature. There are three principal ways of doing this(liquefaction of gases). Firstly, the gas may be passed through a cold bath containing a more easily liquefied gas, which is boiling at a reduced pressure and therefore has a very low temperature. Secondly, the gas may be allowed to expand adiabatically and do work, losing its heat-energy in the process and thirdly, the gas may be cooled by a method depending on the fact that, for a real gas, the internal energy is not independent of the volume.

The third of these is the commonest nowadays, and the one we shall describe in detail. However, you must first read the Joule-Kelvin effect, a phenomenon upon which it depends.

In describing this third process used in the liquefaction of gases, we must draw our attention to the Linde Process. Here the cooling of a gas in a free expansion is small, but Linde devised an ingenious arrangement for making it cumulative, and so producing a great temperature fall. His apparatus is shown diagrammatically in the image below. 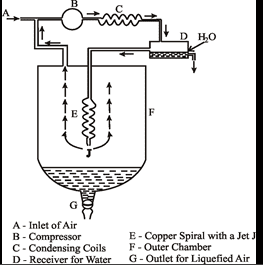 When air is to b liquefied, it must first be freed of carbon(IV) oxide and water, which would solidify and choke the pipes; both are removed by solid caustic soda in a vessel. The pure air is compressed to about 150 atmospheres by a pump P, and the heat of compression is removed in the water cooled copper coil C. The air then passes down the copper coil D, which runs within another copper coil E. It emerges through a nozzle N whose opening can be adjusted from outside. The nozzle lies inside a Dewar vessel or thermos flask F. The air expands on emerging, and is cooled by the Joule-Kelvin effect. It then passes upwards through the outer coil E, and as it does so, cools the incoming gas. The incoming gas is thus cooled before making its expansion, and after its expansion becomes cooler still. On escaping through E, it cools the following gas yet further. Thus the cooling of the escaping gas continuously helps the cooling of the arriving gas, and the cooling is said to be regenerative. Eventually the gas emerging from the nozzle cools below the critical temperature; and since the actual pressure, 150 atmospheres, is well above the critical pressure, 39 atmospheres, the gas liquefies and collects in the flask. The liquefier is heavily lagged with insulating material, G, to prevent heat coming in from the outside. 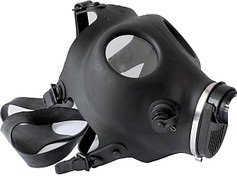