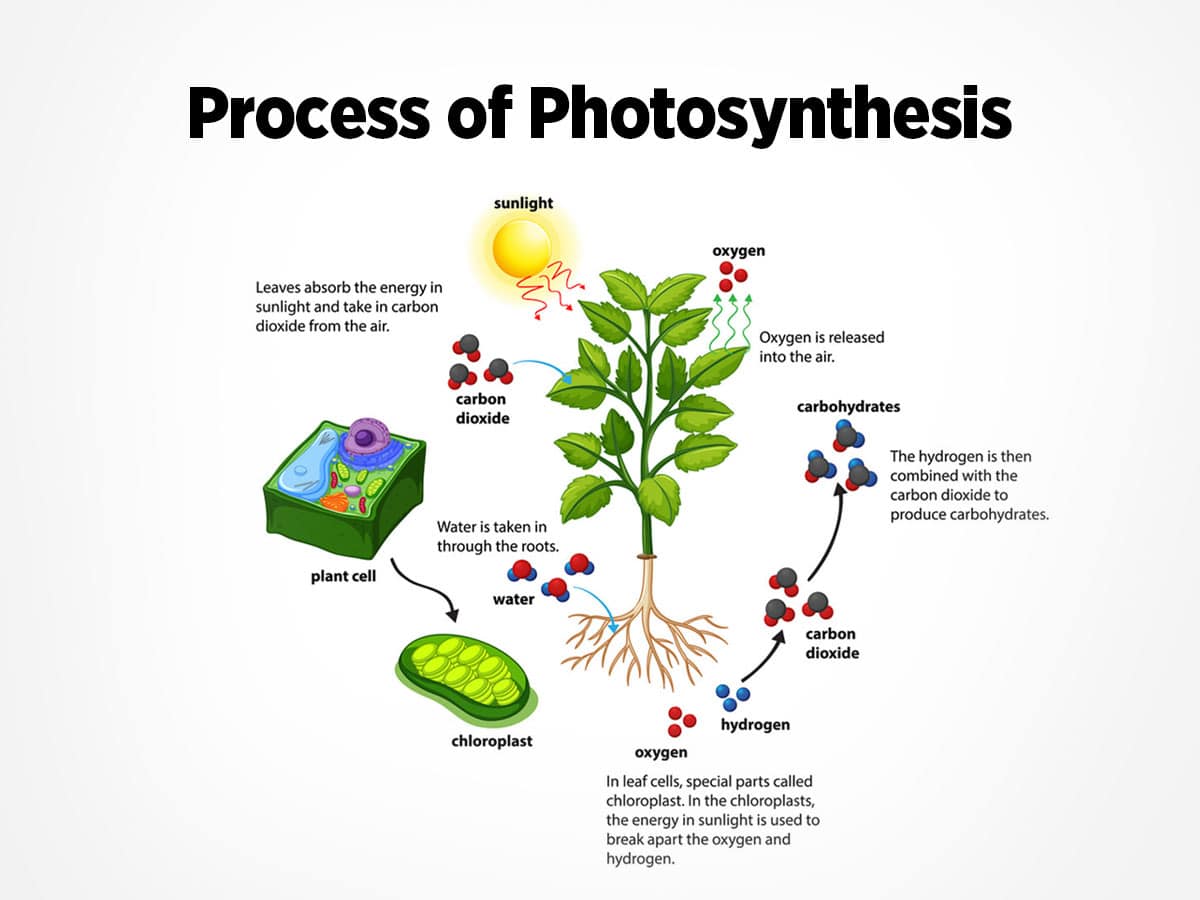 Photosynthesis is the process by which carbohydrates are created. Plants, algae, and certain bacteria use it to convert sunlight, water, and carbon dioxide into oxygen and energy in the form of sugar. It is most likely the most significant biochemical process on the planet.

Essentially, it recycles the carbon dioxide expelled by all breathing organisms into the atmosphere as oxygen.

Photosynthesis is also important in other parts of the biosphere. Carbon dioxide is removed from the atmosphere by both marine and terrestrial plants, and some of it is precipitated back out as shells made of calcium carbonate or buried as organic matter in soil.

The carbon cycle would not be possible without photosynthesis, and we would run out of food. Over time, the atmosphere would lose nearly all of its gaseous oxygen, and most organisms would vanish if there was no photosynthesis.

What is the process of photosynthesis?

Light energy, carbon dioxide, water, and nutrients are all required by plants. These ingredients are derived from both the surrounding atmosphere and the soil.

READ MORE:  The Mechanism Of Seed Formation Without Fertilization

Plants absorb sunlight through the cuticle and epidermis, the two top layers of their leaves. Because these layers are thin, light can easily pass through them. Carbon dioxide is drawn in from the atmosphere, while water is drawn up from the soil and into the body of the living plant.

Palisade mesophyll cells are found just beneath the cuticle and epidermis. To maximize light absorption, these specialized cells are vertically elongated and arranged closely together.

The spongy mesophyll tissue lies beneath the palisade mesophyll cells and is loosely packed for efficient gas exchange. As gases enter and exit these cells, they dissolve in a thin layer of water that surrounds them.

There are a lot of chloroplasts inside the palisade mesophyll cells. They contain chlorophyll, which is a type of molecule that does not absorb green wavelengths of white light. Plants, on the other hand, reflect it back to us, giving them their green color.

The magic happens inside the chloroplast. Energy from light waves is absorbed and stored in energy-carrying ATP molecules in a light-dependent reaction.

Then, in a light-independent reaction (the Calvin Cycle), ATP is used to create glucose, which serves as an energy source. Water is oxidized, CO2 is reduced, and oxygen is released into the atmosphere.

Stomata in the leaves are microscopic pores that open to both let in carbon dioxide and release oxygen (and water vapour).

What is the photosynthesis equation?

Plants require nutrients from the soil in addition to light energy, carbon dioxide, and water. When plant tissue dies and begins decomposing in the soil, these nutrients are released or recycled.

Although oxygen in the form of gas molecules (O2) is a byproduct of photosynthesis, it is responsible for the oxygen in the air that keeps us alive. Plants emit energy and water into the atmosphere via respiration.

The food chain and photosynthesis

READ MORE:  Importance of Chromatophore and Luciferin on Adaptive Coloration

Some energy is lost as waste heat at each level of energy transformation along the food chain. Furthermore, a significant portion of the energy input to each organism is used in respiration to maintain the organism’s body. This energy is not stored for later use by organisms further up the food chain. This is one of the reasons why, as you move up the food chain, both the number of organisms and their total amount of living tissue decrease.

When did photosynthesis first begin?

The evolution of photosynthesis had enormous implications for the Earth. Carbon was removed from the atmosphere as organic matter from photosynthetic life was buried in the strata, allowing oxygen to accumulate.

Stromatolites, which are photosynthetic organisms, were present around 3.2 to 3.5 billion years ago, according to evidence. Stromatolites are the oldest known fossils and thus the earliest evidence of life on Earth. They are laminated microbial structures (generally an alternation of light and dark laminae) formed by cyanobacteria and algae.