Pointer instruments are useless for very accurate measurements: the best of them have an intrinsic error of about 1 percent of full scale. Where greater accuracy than this is required, elaborate measuring circuits are used. One of the most versatile of these, due to Poggendorf, is the potentiometer. It consists of a uniform wire, AB as represented in the diagram below, about a meter long; through it an accumulator X maintains a steady current I. since the wire is uniform, its resistance per centimeter, R, is constant; the voltage drop across 1 cm of the wire, R1 is therefore also constant. 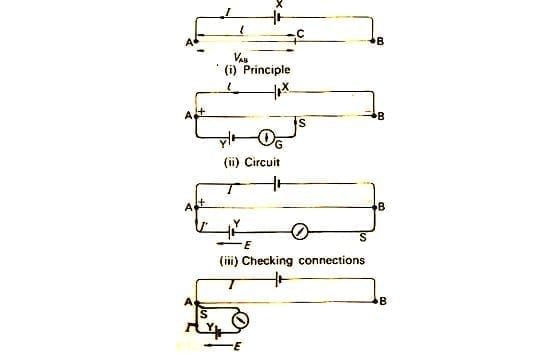 The potential difference between the end A of the wire, and any point C upon it, is thus proportional to the length of wire l between A and C;

To illustrate the use of the potentiometer, let us suppose that we take a cell, Y in the diagram below and join its positive terminal to the point A (to which the positive terminal of X is also joined). We connect the negative terminal of Y, via a sensitive galvanometer, to a slider S, which we can press on to any point in the wire. Let us suppose that the cell Y has an e.m.f. E, which is less than the potential difference VAB across the whole of the wire. Then if we press the slider on B, a current I’ will flow through Y in opposition to its e.m.f. This current will deflect the galvanometer G let us say to the right. If we now press the slider on A, the cell Y will be connected straight across the galvanometer, and will deliver a current I” in the direction of its e.m.f. The galvanometer will therefore show a deflection to the left. If the deflections at A and B are not opposite, then either the e.m.f. of Y is greater than the potential difference across the whole wire, or we have connected the circuit wrongly. The commonest mistake in connecting up is not joining both positives to A. 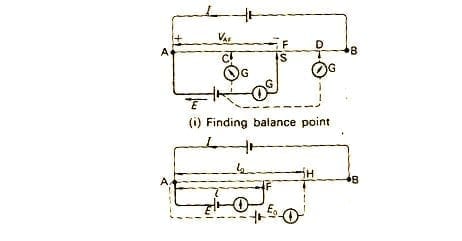 Now let us suppose that we place the slider on to wire at a point a few centimeters from A, then at a point a few centimeters farther on, and so forth. (We do not run the slider continuously along the wire, because the scarping would destroy the uniformity.) When the slider is at a point C near A the potential difference VAC is less than the e.m.f. E of Y; current therefore flows through G in the direction of E, and G may deflect to the left. When the slider is at D near B, VAB is greater than E, current flows through G in opposition to E, and G deflects to the right. By trial and error (but no scarping of the slider) we can find a point F such that, when the slider is pressed upon it, the galvanometer shows no deflection. The potential difference VAf is then equal to the e.m.f. E; no current flows through the galvanometer because E and VAF act in opposite directions in the galvanometer circuit. Because no current flows, the resistance of the galvanometer, and the internal resistance of the cell, cause no voltage drop; the full e.m.f. E therefore appears, between the points, A and S, and is balanced by VAF:

If we now take another cell of e.m.f E, and balance it in the same way, at a point H, then

The potential differences VAF, VAH are proportional to the lengths l, l from A to F, and from A to H, respectively. 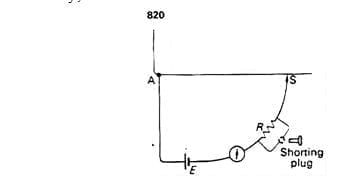 Uses of the Potentiometer, E.M.F. and Internal Resistance

All the use of the potentiometer depend on the fact that it can measure potential difference accurately, and without drawing current from the circuit under test.

If one of the cells in the diagram above has a known e.m.f., say E then the e.m.f. of the other, E,is given by equation:

A cell of known e.m.f. is called a standard cell. The e.m.f.s of standard cells are determined absolutely that is to say, without reference to the emf.s of any other cell by methods which depend, in principle, on the definition of e.m.f. Standard cells are described along with the precautions which must be taken in their use. For simple experiments a Daniell cell, whose e.m.f. is about 1.1 volt, may be used as a standard.

The equation above is true only if the current I through the potentiometer wire has remained constant. The easiest way to check that it has done so is to balance the standard cell against the wire before and after balancing the unknown cell. If the lengths to the balance-point are equal within the limits of experimental error then the current I may be taken as constant. A check of this kind should be made in each of the experiments to be described.

The internal resistance of a cell, r, can be found with potentiometer by balancing first its e.m.f., E, and the its terminal potential difference, V, when a know resistance R is connected across it. Ohm’s law for the complete circuit gives

Where l and l’ are the lengths of potentiometer wire required to balance E and V. from equations (13) and (14), r can be found from

How to Caliberate a Voltmeter Using a Potentiometer

The diagram below shows how a potentiometer can be used to calibrate a voltmeter. A standard cell is first used to find the p.d. per cm or volts per cm of wire: if its e.m.f. E is balanced by a length l then

Different voltages Vm are now applied to the voltmeter by the adjustable potential divider P. the fixed potential divider, comprising R1R2, gives a known fraction V of each value of Vm which is then balanced on the potentiometer:

(The resistance R1 and R2 are high of the order of 1000 to 10000 ohms, so that the voltage adjustment by P is fairly uniform. Their ratio is chosen so that the greatest value of V is measurable on the potentiometer about 1.5 volts.) if l is the lengths of potentiometer wire which balances a given value of V, then

From each value of V, the value of Vm is calculated by equation (16). If the voltmeter reading is Vobs; then the correction to be added to it is Vm – Vobs. This plotted against Vobs, as in the diagram below

How to Measure of Current On a Potentiometer

A current can be measured on a potentiometer by means of the potential difference which it sets up across a known resistance, R in the first diagram below. The resistance is low, being chosen so that the potential difference across it is of the order of 0.1 volt. (A higher value is not chosen, because the voltage drop across the resistor disturbs the circuit in which it is inserted.) The second diagram below shows in detail the kind of resistor used, which is often called a standard shunt. It consists of a broad strip of alloy, such as manganin, whose resistance varies very little with temperature. The current is led in and out as the terminals I, i. the terminals v, v are connected to fine wires soldered to points PP on the strip; they are called the potential terminals. The marked value R of the resistance is the value between the points PP; it is adjusted by making hack –saw cuts into the edges of the strip.

As shown in the above diagram, the current to be measured, I1, is passed through the shunt, and potential difference between its potential terminals, V, is balanced on the potentiometer wire. If l is the length of wire to the balance point, then

Where E0 and l0 refer to a standard cell as before. The Equation above enables the current to be found in terms of Eo, lo, l, and R, since

The resistance of the wires connecting the potential terminals to the points PP, and to the potentiometer circuit, do not affect the result, because at the balance point the current through them is zero.

This method of measuring a current can be used to calibrate an ammeter, A and the results are treated in the same way as in the calibration of a voltmeter.

How to Use a Potentiometer to Compare Resistances

A potentiometer can be used to compare resistances, by comparing the potential differences across them when they are carrying the same current I1. This method is particularly useful for very low resistances, because, as we have just seen, the resistances of the connecting wires do not affect the result of the experiment. It can, however, be used for higher resistances I desired. With low resistances the ammeter A’ and rheostat P are necessary to adjust the current to a value which will neither exhaust the accumulator Y, nor overheat the resistors. No standard cell is required. The potential difference across the first resistor, V1 = R1l1, is balanced against a length l1 of the potentiometer wire, as shown by the full lines in the figure. Both potential terminals

of R1 are then disconnected from the potentiometer, and those of R2 are connected in their place. If l2 is the length to the new balance point, then

This result is true only if the current I1 is constant; as well as the potentiometer current. The accumulator Y, as well as X, must therefore be in good condition. To check the constancy of the current I1, the ammeter A’ is not accurate enough. The reliability of the experiment as a whole can be checked by balancing the potential V1 a second time, after V2. If the new value of l1 differs from the original, then at least one of the accumulators is running down and must be replaced.

The image below shows a potentiometer devised by Lord Rayleigh (1842 – 1919), which is free from errors due to non-uniformity of the wire and to contact  resistances at the end A. it consist of two plug-type resistance boxes, R1, R2, joined in series. (these boxes may well be the R-sections of two similar Post Office boxes). At the start of a measurement all the plugs of R1 are inserted, and all of R2 taken out. Then R1 is zero, and the main current I sets up on potential difference across it; but when the key K is pressed, the unknown e.m.f. E deflects the galvanometer. R1 is now increased by, say, 100 ohms, and R2 is decreased by the same amount. In this way R1 + R2 is kept constant, and the current I does not change. But there is now a potential difference across R1, which opposes E. plugs are taken out of R1 and put into R2, so as to keep R1 + R2 constant, until the galvanometer shows no deflection when K is pressed. If R’1 is the value of R1 at this point, then

The procedure is now repeated with a standard cell of e.m.f. E, in place of R. sine R1 + R2 has been kept constant, the current I is the same as before; hence, if R”1 is the new value of R1 at balance,