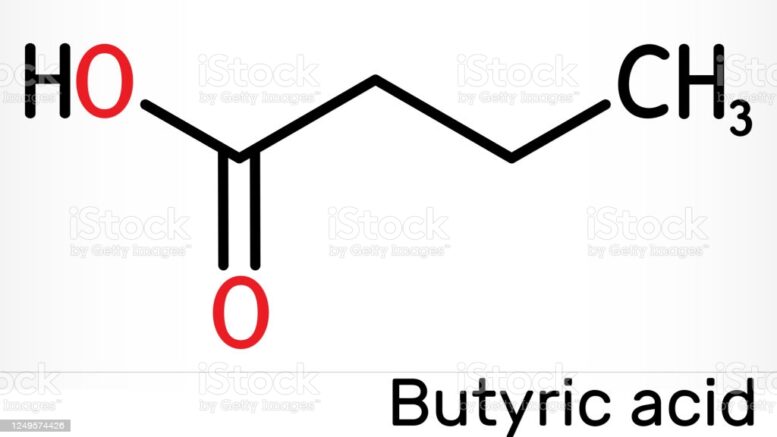 Butyric acid also known as butanoic acid is a carboxylic acid with the formula C4H8O2 or CH3CH2CH2CO2H. It is an oily and colourless liquid with a butter-like taste and an unpleasing odour. Its esters and salts are called butanoates or butyrates.

The properties of butyric acid were first revealed in detailed form in 1923 by Michael Eugène Chevreul, a chemist from France. He named it butyric acid which means butter in Ancient Greek because his research showed that the substance is the reason why butter smells how it does.

However, Lieben and Rossi are regarded as the discoverers of this liquid after they made their properties known to the public in 1869. Furthermore, the fermentation of butyrate was discovered in 1861 by Louis Pasteur.

Through hydrolysis, it can be released from the glyceride of butter when its taste and smell become offensive, further giving it an unpleasant odor. Its food sources include breast milk, red meat, ghee, animal fat, butter, vegetable oils, and lots more.

Butyric is also found in the gut of living creatures and is formed when the dietary fiber in the body is fermented by bacteria. Butyric is also classified as a short-chain fatty acid and helps to energize the body’s colon cells. 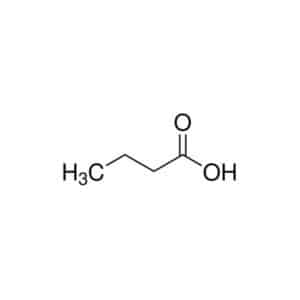 • It is produced by the fermentation of anaerobic bacteria which leads to the breakdown of glucose to also form dual molecules of hydrogen and carbon dioxide.

• Its saturation with salts enhances its separation from aqueous solutions.

• Butyric acid can also be produced in the body when dietary fiber is fermented by bacteria.

• Butyric reacts with ethanol to form ethyl butyrate and water.

• Butyric acid is treated with water to produce acetic acid and ether.

• It is used as a flavoring agent in the production of food.

• It is used in the production of numerous butyrate esters.

• It is used in the production of disinfectants.

• Its derivatives can be used in the production of anaesthetics and other pharmaceutical products.

• It is used as bait in fishing.

• It is used in the decalcification of hides.

• It is used to reduce the risk of colon cancer and improve digestive health in humans.

• It is used as an additive in perfumes.

• It is used to energize colon cells in the body.

• It is used in the production of varnishes. 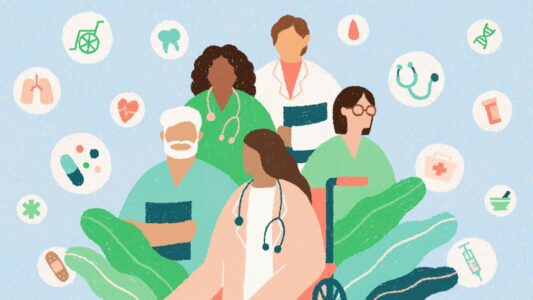 According to research, excess production of butyric acid in the body due to increased intake of dietary fiber can decrease your risk of suffering from colon cancer.

However, ingestion of butyric acid as a liquid will lead to irritation of the stomach and mouth while inhaling it will lead to vomiting and nausea. It can also cause burns and injuries to the skin and eyes respectively if it comes in contact with them.