Acetone (CH3COCH3 or (CH3)2CO) also called propane or dimethyl ketone is an organic compound that is regarded as the smallest and simplest ketone. It is a colourless and volatile solvent that is extremely flammable and evaporates easily.

It is found naturally in the environment and also occurs in the body as a natural byproduct when fats break down. It is present in animal blood and urine in minimal quantity and is further produced and discarded via metabolic processes. It is used as a solvent for nail polish and paint remover and as an ingredient in the production of drugs, plastics, and several other household and industrial activities.

in 2010, over 6.7million tonnes of this chemical were produced globally with the United States of America, Taiwan, and China being the top three highest producers respectively. Acetone can be produced by the dry distillation of acetate like anhydrous calcium acetate.

In addition, acetone can also be produced using the cumene process which involves the alkylation of benzene with propylene to generate cumene which is oxidized by air to make phenol and acetone.

It can also be produced through the Wacker-Hoechst process which involves the direct oxidation of propylene.

It can also be produced by the hydration of propylene to give 2-propanol which is later dehydrated to acetone.

Acetone undergoes a condensation reaction with two molecules of phenol to form Bisphenol-A.

When acetone undergoes oxidation, it forms acetone peroxide as a byproduct.

It is also miscible with water, ethanol, methanol, and benzene. 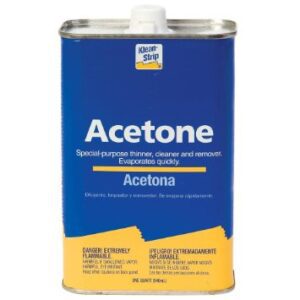 • Industrially, It is used as a solvent – it breaks down and dissolves other materials.

• It is used for protein precipitation.

• It is used in the production of lacquers for automobiles.

• It is used as a paint thinner.

• It is used in the production of nail polish remover.

• It is used as a component in the production of explosives.

• It is used in the synthesis of bisphenol A.

• It is used in the extraction process of essential oils.

• In the laboratory, it is used as a polar solvent for organic reactions.
It is also used to rinse glassware in the lab.

• In the pharmaceutical industry, it is used as an excipient, a solvent, and a denaturant.
It is used as a skin defatting agent in the treatment of acne.

• It is used in the production of glue removers.

• It is used to erase marks from metals and glasses.

• It is used to degrease wood.

• It is used as a solvent in vanishers.

• It is used in the production of fibers such as rayon.

• It is used in the preparation of compounds such as cordite, sulphonal etc. Acetone is an extremely flammable liquid.

Industrial acetone contains a minimal amount of water that causes it to ignite when exposed to a certain amount of pressure.

So, you must make sure you keep it in well-ventilated areas away from hot environments and store them in fireproof containers if in large quantities.

A high level of exposure to acetone can lead to coma, while contact with your eyes and skin and lead to irritation.

Ingestion of high levels of acetone can cause acetone poisoning which could lead to vomiting, coughing, nausea, ataxia, gastric hemorrhage, unconsciousness amongst others, while inhalation can cause temporal effects on your central nervous system, increase in pulse rate, unconsciousness, confusion, headache, and potentially coma.

So, you must endeavor to wear protective clothing, safety eyeglasses, and gloves to prevent contact.

However, despite its flammability and the harm that acetone can have on your eye, skin, or nervous system if inhaled, wrongly handled, or ingested, a recent study shows that its toxicity can only be exhibited when wrongly exposed and released and it has little or no toxicity when it used properly.

These studies revealed that this chemical isn’t mutagenic, a neurotoxicant, a genotoxicant, and has a very low carcinogenicity potential.
This also lead to its removal from the list of toxic chemicals in 1995 by the United States’ Experimental Protection Agency(EPA)

The classification of acetone as a safe ketone by the Food and Drug Administration (FDA) has further also led to its use in the production of processed and unprocessed food at a certain concentration.

Nevertheless, the intake of ketone should be regulated because it could lead to Diabetic Ketoacidosis (DKA).