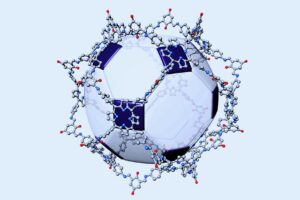 Porphyrins are a class of heterocyclic macrocycle organic compounds made up of a large ring molecule and four pyrroles, which are smaller rings made up of four carbons and one nitrogen.

These pyrrole molecules are linked together by a series of single and double bonds, resulting in the formation of a large ring.

A tetrapyrrole is the technical name for four pyrroles connected together.

The ring is flat in space, and the distribution of electrons around its circumference is fairly even.

As a result, a porphyrin is classified as an aromatic compound. This indicates that a porphyrin molecule is extremely stable.

Porphyrin is the model of a general porphyrin. This molecule is only found as an intermediate in nature on rare occasions, but it is the foundation of all porphyrin molecules.

The blue portions of the molecule represent the aromatic ring that serves as the foundation for all porphyrin molecules. Eventually, the black molecules and bonds will be substituted for complex side chains. The cellular machinery will be able to attach to and use the porphyrin thanks to these molecules.

Porphyrins can also absorb certain wavelengths of light, especially when combined with other ions. Porphyrins are responsible for the red color of blood as well as the green color of plants.

Porphyrin molecules have many functions in animals, plants, and even bacteria. As a result, porphyrin is regarded as an evolutionarily conserved molecule. This means that porphyrins have been used and modified by countless lines of organisms due to their utility.

Porphyrins are classified into two categories:

Porphyrin molecules are important in the formation of heme groups in animals.

These are simply porphyrin molecules with different side chains substituted around the main ring. The porphyrin ring plays an important role in heme.

A heme’s primary function is to transport oxygen. When oxygen is bound to the heme, it can move quickly throughout the body and through the cells.

Each part of the body is associated with a specific protein that uses heme to transport oxygen. The protein hemoglobin, found in red blood cells, holds the heme in place. These proteins also give heme functionality.

When hemoglobin is exposed to an acidic environment, for example, it changes shape. This shape change causes the oxygen to detach from the heme. This mechanism evolved because carbon dioxide, a byproduct of oxygen use, makes the blood acidic.

As a result, when carbon dioxide levels are high, cells require more oxygen. This hemoglobin mechanism allows oxygen to be released into the proper parts of the body.

Myoglobin, another heme-holding molecule, serves as an oxygen-transporting molecule within muscle cells. This heme is also derived from porphyrin and contains iron.

Myoglobin and hemoglobin have different side chains. As such, it can interact with muscle cell machinery and deliver oxygen from the cell’s surface to the mitochondria, which require oxygen for oxidative phosphorylation.

Heme groups, which are composed of porphyrin molecules, can also be found in the electron transport chain’s cytochrome molecules

In this case, the iron molecule acts as a repository for extra electrons. It absorbs electrons when necessary and releases them when not. The electron transport chain is a complicated network of cytochrome proteins, each of which contains a heme group. These work together to extract energy from electrons, drive a proton pump, and store energy in the form of ATP.

A porphyrin molecule is an organic molecule that must be created and destroyed in the body by specific proteins. Because proteins are programmed by DNA, any mutations in the DNA can result in protein malfunctions that process porphyrin molecules. While most porphyrins are extremely beneficial, those that have not formed properly or cannot be broken down pose a serious threat to the body.

Porphyrin molecules have a high degree of interactivity. They have the ability to disrupt the cell membrane and contain an iron molecule with the potential to act.

They have the potential to disrupt the cell membrane and, because they contain an iron molecule with the ability to act as an electron sink, they promote the formation of free radicals.

It is a genetic condition that causes porphyrin buildup due to its inability to be broken down or properly created.

It is classified into several types based on which enzyme is mutated. As a result, the symptoms and treatments for the various versions differ.

Finally, the porphyrin molecule that is causing the problem must be identified and addressed. This could include using an artificial porphyrin or putting the patient through gene therapy to stimulate their body’s production of the necessary enzymes.

Purple urine, caused by unbroken porphyrins left in the urine, is frequently used to diagnose porphyria.

We see the same iron-holding heme porphyrins in plants and animals because the porphyrin molecules are evolutionarily conserved.

Plants, like animals, use the electron transport chain to produce ATP, and similar porphyrins are used.

Plants, on the other hand, have mastered a different configuration of the porphyrin molecule, allowing them to capture the energy in sunlight. Chlorophyll is a unique molecule built around a porphyrin base.

The chlorophyll molecule has several distinct side-chains that are distinct from the porphyrin molecule. It also has a very long side chain, which can be seen coming off the bottom. These side-chains alter the shape and configuration of the base porphyrin slightly.

You’ll notice that instead of iron (Fe), a magnesium (Mg) ion has been “captured” within the porphyrin. Unlike heme groups, which contain iron, magnesium in chlorophyll does not transfer oxygen.

Instead, the molecule’s function is to absorb solar energy.

During the process, the magnesium ion aids in the capture and storage of electrons. The magnesium ion also assists the porphyrin in absorbing red and blue light rather than reflecting red light as blood does. Giving plants their green color, only a strong green color is allowed to pass through.

Porphyrins can be found almost anywhere on the planet, aside from plants and animals. Bacteria use porphyrins in the same way that animal cells do, though the final molecules they use may look very different.

Certain bacteria can also photosynthesize, and like plants, they use porphyrins to capture solar energy. There are also substances, such as vitamin B12, that are synthesized from a porphyrin but do not resemble one when finished.

Porphyrins can also be manufactured in a laboratory. Because these molecules act as pigments, they have been used in dyes and as colorants in various solutions. While many porphyrins can be synthesized in the lab, they tend to be more symmetrical than natural porphyrins.

Crude oil is another interesting example of porphyrins. Organic molecules, it appears, can naturally form into porphyrins during the many centuries buried beneath the Earth. These substances are discovered as byproducts of crude oil extraction from the ground.

Evolutionary scientists hypothesize that these porphyrins, and those created in similar ways, could have been the starting material for the origins of life on Earth.