All living things are composed of small units that cannot be seen with the naked eye. These units are referred to as cells. Some organisms consist of just one cell(unicellular), while others are made of several cells(multicellular). Animal and plant cells and their functions have been a subject of serious studies by biologists over the years. In this post, we shall examine what a cell is, the various organelles of a cells and the functions they carry out.

WHAT IS A CELL?

A cell defined as the building block of all living organisms
It is the smallest unit of life that carries out all of life method/process.

1) Independent organisms (unicellular organisms) which includes bacterias, protozoa, many algae and some fungi.

A colony is a group of cells held together by mucilage and they move together as a unit e.g. Volvox, Eudora etc.

Cell was first discovered with a microscope by “Robert Hooke” an English Scientist in 1665. He reported that tissues were made up of box-like structures or compartments that he called cells.
In 1839, German biologists, Theodor Schwann and Matthias Schleiden carried out more research about cell in a book. His report was thus “All organisms are composed of essentially alike parts, called the cells”.

READ MORE:  The Adaptive Mechanism of Hydra to a Sedentary Lifestyle

(ideas that make up the cell theory)

1)All living can perform life processes. Cells are the basic unit of life.

2)All cells come from pre-existing cells.

Animal cells are the fundamental unit of life in the animal kingdom.

Plant cells are the fundamental unit of life in the kingdom plantae.

Plant cells can be classified into three types.

1) PARENCHYMA:
The Parenchyma cells help in storage, photosynthesis and other functions.

2) COLLENCHYMA:
The Collenchyma cells are only present during maturity and have only a primary wall.

DIFFERENCES BETWEEN ANIMAL AND PLANT CELL.

2)Animal cells do not have rigid cell walls like plant cells.

3)Plant cell walls are made of cellulose, this allows high pressure to build up in plant cells without the cells bursting.

4)Presence of a large vacuole in plant cell. and small vacuoles in animal cells.

Similarities In Plant And Animal Cell. 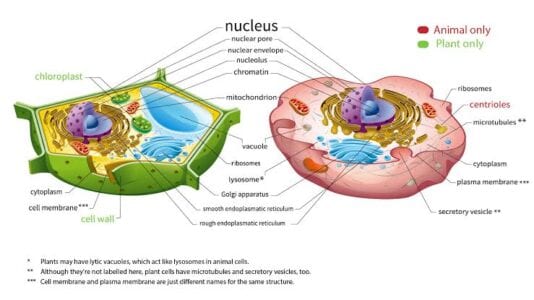 1)Both plant and animal cells are eukaryotic, which means they have a defined nucleus which contains chromosomes.

2)Animal and plant cells have a cell membrane that surrounds the cell.

3) Both cells have complex structures.

4)Both plant and animal cells have plasma membranes.

Plant and animal cells contain organelles which are tiny structures inside a cell that performs specific functions for a cell. Example: lysosome and chloroplast.

3)Nucleolus:
– Spherical structure within the nucleus
– Consists of DNA and RNA

4) Nucleoplasm:
– The fluid present in the nucleus
– It is highly viscous

14) Cell wall
– Protects and supports the cell
– Maintains the shape

15) Chloroplast
– Carry out photosynthesis in the chlorophyl
– Stores food and pigments.

Now you have gain a whole new knowledge not just about the human body cells but that of animals and plants as well, let us know your thoughts in the comment section.