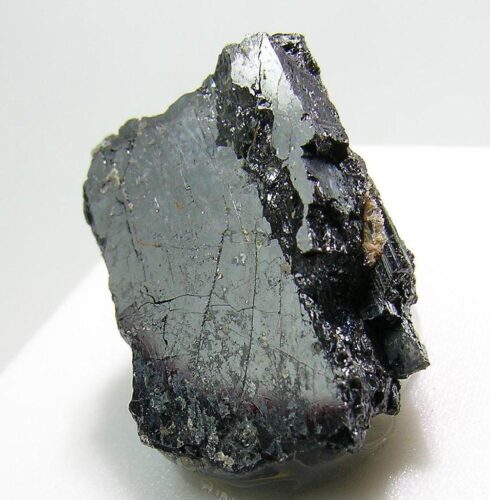 Tantalite is a dimorphic metal with another mineral called tapiolite. A dimorph is a mineral that has the same chemistry as another mineral but has a different structure.

It is chemically similar to columbite, and the two are frequently grouped together in mineral guides as a semi-singular mineral called coltan or “columbite-tantalite.” Tantalite, on the other hand, has a much higher specific gravity than columbite (8.0+ vs. 5.2 for columbite). Tantalite-(Fe) or ferrotantalite is iron-rich tantalite, while tantalite-(Mn) or manganotantalite is manganese-rich tantalite.

It is a greyish silver, heavy, and extremely hard metal that is frequently found in association with fractionated pegmatites. Tantalum has been found in rare-element pegmatites that have been found throughout Manitoba’s Precambrian rocks.

Tantalite is found in granitic pegmatites rich in rare-earth elements, as well as placer deposits formed from such rocks. Australia, Brazil, Canada, Colombia (Guaina and Vichada), Egypt, northern Europe, Madagascar, Namibia, Nigeria, Rwanda, The Democratic Republic of the Congo, the United States (California, Colorado, Maine, and Virginia), and Zimbabwe have all been found to have it. Brazil has the world’s largest tantalite reserve (52.1%).

READ MORE:  Isomorphism and the Characteristics of Isomorphous Compounds

Tantalite is the most common tantalum mineral and an important source of the industrially useful metal.

Tantalite is used in alloys to increase strength and melting points, in glass to increase the index of refraction, and in surgical steel because it is non-reactive and does not irritate body tissues.

Tantalite is related to the mineral columbite. In fact, many mineral guides group the two together as a semi-singular mineral called columbite-tantalite.

A series occurs when two or more elements occupy the same positions within a crystal structure and their percentages vary. Because they have the same structure and chemistries, the two minerals in this series have similar properties (tantalum and niobium are very similar elements).

Tantalite differs most from columbite in that it has a much higher specific gravity, 8.0+ versus 5.2 for columbite. Color, transparency, and streak are other properties that vary slightly. Both minerals can be found in granitic pegmatites rich in lithium and phosphorus minerals, with columbite concentrated at the pegmatite’s edges and tantalite enriched in the core.

Tantalite has its own series. The amounts of iron and manganese vary greatly without having much of an effect on the properties. However, the two end members are recognized as distinct minerals, though collectors find this cumbersome and prefer tantalite to the non-unique names ferrotantalite and manganotantalite.

Where are Tantalite  Found?

Tantalite specimens make an excellent addition to any mineral collection. Good crystals are both complex and visually appealing. Although the color range is typically limited to black to brown, the luster is generally satisfactory. Manganese rich tantalites can be brown and translucent.

Brazil and Australia have the world’s largest tantalum reserves. Rwanda, where the mineral is mined and imported, is one of the world’s major tantalum producers.

Other characteristics include a bluish iridescent tarnish and weak magnetism in some specimens.