Physical Properties of the Noble Gases.

Because the inter-atomic forces are very weak, the melting points and boiling points are also very low. The boiling point He is the lowest of any element, only four degrees above absolute zero.

The atomic radii of the elements are all very large and increase on descending the group. It must be noted that these are non – bonded radii and should be compared with the van der Waals radii of other elements rather than with covalent (bonded) radii.

The noble gases are all able to diffuse through glass, rubber and plastic materials and some metals. This makes them difficult to handle in the laboratory, particularly since glass Dewar flasks cannot be used for low temperature work.

Helium is unique. It has the lowest boiling point of any substances known. All other elements become solids on cooling, but cooling only produces helium liquid. It only forms a solid under high pressure (about 25 atmosphere). There are two different liquid phases. Helium I is a normal liquid, but helium II is a superfluid. A superfluid is a most unusual state of matter. Normally atoms are free to move in a gas, can move in a more restricted way in a liquid and can only vibrate about fixed positions in a solid. As the temperature decreases, the amount of thermal motion of atoms decreases, and gases become liquids and eventually solids. When the temperature of Helium gas is lowered to 4.2 K it liquefies as helium I. rather surprisingly the liquid continues to boil vigorously. At 2.2. K, the liquid suddenly stops boiling (which with normal materials is when a solid is formed). In this case helium II is formed. This is still a liquid because the inter-atomic forces are not strong enough to form a solid, but thermal motion of the atoms has actually stopped. Helium I is a normal liquid, and when it changes to helium II at the π – point temperature, many physical properties change abruptly. The specific heat changes by a factor of 10. The thermal conductivity increases by 106 and becomes 800 times greater than for copper. It becomes a superconductor (i.e. shows zero electrical resistance). The viscosity becomes effectively zero and 1/100th of that of gaseous hydrogen. It spreads to cover all surfaces at temperatures below the π – point. Thus the liquid can actually flow up the sides of the vessel and over the edge until the levels on both sides are the same. The surface tension and compressibility are also anomalous.

Chemical properties of the noble gases

The noble gases were isolated and discovered of their lack of reactivity. For a long time it was thought that they really were chemically inert. Before 1962, the only evidence for compound formation by the noble gases was some molecular Ions formed in discharge tubes and clathrate compounds.

Several molecular ions such as He+2, HeH+, HeH2+ and Ar+2 are formed under high energy conditions in discharge tubes. They only survive momentarily and are detected spectroscopically. Neutral molecules such as He2 are unstable.

Clathrate compounds of the noble gases are well known. Normal chemical compounds have ionic or covalent bonds. However, in the clathrates atoms or molecules of the appropriate size are trapped in cavities in the crystal lattice of other compounds. Though the gases are trapped, they do not form bonds.

If an aqueous solution of quinol (1,4-dihydroxybenzene) is crystallized under a pressure of 10 – 40 atmospheres of Ar, Kr or Xe, the gas becomes trapped in cavities of about 4 A diameter in the β – quinol structure, when the clathrate is dissolved, the hydrogen bonded arrangement of β – quinol breaks down and the noble gas escapes. Other small molecules such as O2, SO2, H2S, MeCN and CH3OH form clathrates as well as Ar, Kr and Xe. The smaller noble gases He and Ne do not form clathrate compounds because the gas atoms are small enough to escape from the cavities. The composition of these clathrate compounds corresponds to 3 quinol : 1 trapped molecules, though normally all the cavities are not filled.

The gases Ar, Kr and Xe may be trapped in cavities in a similar way when water is frozen under a high pressure of the gas. These are clatherate compounds, but are more commonly called “the noble gas hydrates”. They have formulae approximating to 6H2O : 1 gas atom. He and Ne are not trapped because they are too small. The heavier noble gases can also be trapped in cavities in synthetic zeolites, and samples have been obtained containing up to 20% of Ar by weight. Clathrates provides a convenient means of storing radioactive isotopes of Kr and Xe produced in culear reactors.

The Chemistry Of Xenon

The first real compound of the noble gases was made in 1962. Bartlett and Lohman had previously used the highly oxidizing compound platinum hexafluoride to oxidize dioxygen.

The first ionization energy for O2    O2+ is 1165kJ mol-1, which is almost the same as the value of 1170kJ mol-1 for Xe     Xe+. It was predicted that xenon should react with PtF6. Experiments showed that when deep red PtF6 vapour was mixed with an equal volume of Xenon, the gases combined immediately at room temperature to produce a yellow solid. They (incorrectly) thought the product obtained was xenon hexafluoroplatinate(v), Xe+[PtF6]–. The reaction has since been shown to be more complicated and the product is rally [XeF] + [Pt2F11]–.

Soon after this it was found that Xe and F2 reacted at 400oC to give a colourless volatile solid XeF4. This has the same number of valency electrons as and is isostructural with the polyhalide ion [ICl4]–. Following these discoveries there was a rapid extension of the chemistry of the noble gases and in particular of xenon.

Structures of Some Xenon Compounds

Xe reacts directly only F2. However, oxygen compounds can be obtained from the fluorides. There is some evidence for the existence of XeCl2 and one compound is known with a Xe – N bond. Thus there is quite an extensive chemistry of Xe. The principal compounds are listed in Table above.

Xenon reacts directly with fluorine when the gases are heated at 400oC in a sealed nickel vessel and the products depend on the F2/Xe ratio.

The compounds XeF2, XeF4 and XeF6 are all solids. They can be sublined at room temperature and can be stored indefinitely in nickel or Monel containers. The lower fluorides form higher fluorides when heated with F2 under pressure. The fluorides are all extremely strong oxidizing and fluorinating agents. They react quantitatively with hydrogen as follows:

XeF2 is now commercially available and is quite widely used in synthetic organic chemistry. It can oxidize and fluorinate the “hetero element” in an organometallic compound, but does not attack the alkyl or aryl groups.

If XeF2 is mixed with anhydrous HF its reactivity is greatly increased, possibly due to the formation of XeF+

The fluorides differ in their reactivity with water. XeF2 is soluble in wtare but undergoes slow hydrolysis. Hydrolysis is more rapid with alkali.

XeO3 is an explosive white hygroscopic solid. It reacts with XeF6 and XeOF4.

XeO3 is soluble in water, but does not ionize. However, in alkaline solution above pH 10.5 it forms the xenate ion [HXeO4]–.

Several perxenates of Group 1 and 2 metals have been isolated and the crystal structures of Na4XeO6 . 6H2O and Na4XeO6 . 8H2O have been determined by X – ray crystallography. The solubility of sodium perxenate in 0.5M NaOH is only 0.2 grams per litre, so precipitation of sodium perxenate could be used as a gravimetric method of analysis for sodium. Perxenates are extremely powerful oxidizing agents, which will oxidize HCL to Cl2, H2O to O2 and Mn2+ to MnO-4. With concentrated H2SO4 they give xenon tetroxide XeO4, which is volatile and explosive.

XeF2 acts as a fluoride donor and forms complexes with covalent pentafluorides including PF5, AsF5, SbF5 and the transition metal fluorides NbF5, TaF5, RuF5, OsF5, RhF5, IrF5 and PtF5. These are thought to have the structure. 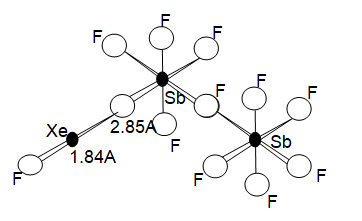 The structure of some of the XeF2 complexes in the solid state are known. In the complex XeF2 . 2SbF5 (Fig above) the two Xe – F distances differ greatly (1.84 A and 2.35 A). this suggests the formulation [XeF]+ [Sb2F11]–. However, the Xe – F distance of 2.35 A is much less than the van der Waals (non – bonded) distance of 3.50A. This suggests that one fluorine atom forms a fluorine bridge between Xe and Sb. In fact the structure is intermediate between that expected for the ionic structure, and that for the fully covalent bridge structure.

XeF4 forms only a few complexes, for example those with PF5, AsF5 and SbF5 . XeF6 can act as a fluoride donor, forming complexes such as:

XeF6 may also act as a fluoride acceptor. With RbF and CsF it reacts as follows:

On heating the [XeF7]– ion decomposes:

Structure and Bonding in Xenon Compounds

The structures of the more common xenon halides, oxides and oxoions and the nature of the bonds and the orbitals used for bonding in these compounds are of great interest and have been the subject of considerable controversy.

This explains the observed structure but an objection is that the 5d orbitals of Xe appear to be too large for effective overlap of orbital. The maximum in the radial electron distribution function for a 5d orbital in a Xe atom occurs at a distance of 4.9A from the nucleus. It has been noted in Chap. 4 in the section. The extent of d orbital participation in molecular bonding that highly electronegative atoms like fluorine cause a large contraction in the size of d orbital. If this contraction is big enough, the valence bond explanation will suffice.

A second objection is over the mixing of orbitals (sp3d hydridization). Mixing is only effective between orbitals of similar energy and the Xe 5d orbital would seem too high in energy to contribute to such a scheme of hydridization. (The difference in energy between a 5d and a 5d level is about 960kJ mol-1).

The molecular orbital explanation involving three centre bonds is more acceptable. The outer electronic configurations of the atoms are:

Assume that bonding involves the 5pz orbital of the two F atoms. For bonding to occur, orbitals with the same symmetry must overlap. These three atomic orbitals combine to give three molecular orbitals, one bonding, one non – bonding and one antibonding. The original three atomic orbitals contained four electrons (two in the Xe 5p2 and one in each of the F 2pz). these electrons will occupy the molecular orbitals of lowest energy. The order of energy is: